How do your thoughts shape your reality? How can you benefit from the power of thinking?

Your mindset strongly impacts your perceptions, efforts, and actions, and you can leverage it to achieve happiness and success. Your brain filters your awareness through a positive or negative lens. This choice dictates your perception of the world, and perception defines your reality.

Learn about the power of thinking below.

Leverage the Power of Thinking

Sometimes the biggest obstacles are your own persistent, negative thoughts. This is why it’s so important to leverage the power of thinking.

Think of your mind as a seesaw. If a light person sits on one end and a heavy person sits on the other, the heavy person will be on the ground while the light person will be suspended in the air. However, if you place the fulcrum (the center point on which the lever balances) closer to the heavy person, that person will be easier to lift. When it comes to being happier, if your mind is entrenched in negative thought, it’s like moving the fulcrum away from the heavy object—it becomes very difficult to lift. On the other hand, if you focus on more positive thoughts, you leverage the power of your fulcrum by moving it closer to the heavy object, and the power of thinking is unbounded.

In this article, we’ll discuss how your mindset affects your efforts and your actions, and how to leverage the power of thinking to achieve success.

If you’ve ever distracted an upset child with a joke, you know that you can’t be sad and happy at the same time. Your brain has a limited capacity to process the many aspects of your experiences and surroundings, so it filters your awareness through a positive or negative lens. This choice dictates your perception of the world, and perception defines your reality. In other words, your mindset determines your reality—mentally and physically.

The following experiment reveals the power of thinking. A group of 75-year-old men spent a week at a retreat, where they were asked to act as they did when they were 55. Additionally, they were surrounded by newspapers, food, decor, and other environmental elements from the year when they were 55. Both before and after the retreat, each individual was tested on physical strength, cognition, short-term memory, and other metrics of health—and, by the end of the week, they had all improved in almost every category, including an almost 10% improvement in eyesight and memory. Just a week of living as if they were 55 again made their physical condition resemble that of a younger man.

The power of thinking is also responsible for the Placebo Effect, in which a sugar pill alleviates a patient’s symptoms just as well as an actual drug. One striking experiment illustrates this by using an allergen instead of a drug: Thirteen students who were highly allergic to poison ivy were told the plant was being rubbed on their left arms—however, although researchers were actually using a harmless shrub, every participant reacted with redness, itching, and boils. Furthermore, the students were told that their right arms were being rubbed with a harmless plant, when it was really poison ivy. Despite the students’ allergies, only two had any reaction whatsoever.

The power of your mindset to impact reality is also at play in Expectancy Theory. This theory explains that your expectation of an event can create brain patterns and reactions that are as real as the actual event. For example, in one study, researchers told half of the cleaning staffs at seven different hotels that housecleaning constituted significant cardiovascular exercise and burned calories, while the other half received no such information. Several weeks later, the first group had lost weight and lowered their cholesterol level, while the second group had no such results. Both groups had performed the same work, but the workers who expected that their jobs would contribute to better health outcomes were actually able to manifest the results they had expected.

Exercise: The Power of Thinking

To leverage the power of thinking, reframe how you think about your most loathsome tasks, and reap the rewards of greater positivity: 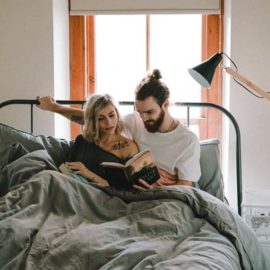