The conformity bias is the way people follow what others are doing instead of making their own decisions. It comes from social influence and is related to groupthink.

Read about the conformity bias and its effects in different settings.

Social Influence and the Conformity Bias

Another key distinction between Econs—the abstract and unrealistic people that appear in economics research—and actually existing Humans is the effect of social pressure. Econs are by and large individualistic and make decisions rationally, without regard for current fashion; Humans, meanwhile, fear ostracism or disdain and are easily influenced by the opinions and actions of others.

Social influence can work for good or ill. When shoppers at their local grocery store notice more and more people bringing reusable bags, they may start to bring their own bag, too, thereby reducing the waste produced by plastic bags. On the harmful side with the conformity bias, studies have shown that teenage pregnancy and conditions like obesity are “contagious”—that is, if a teen’s peers are getting pregnant, she’s more likely to; and if a person’s friends gain weight, he or she probably will as well.

Studies have shown that human beings are immensely influenced by the opinions of their peers when it comes to making choices, which creates a conformity bias or groupthink.

For example, psychologist Solomon Asch discovered that when subjects were asked to answer simple questions anonymously and individually, they erred very infrequently. But when the subjects were given access to others’ answers, and those answers were incorrect, the subjects also answered incorrectly over 33% of the time.

One of Asch’s abiding interests was the rise of fascism, and subsequent studies have gone some way toward explaining how groupthink leads to potentially harmful consequences. For example, one study asked participants to agree or disagree with this statement: “Free speech being a privilege rather than a right, it is proper for a society to suspend free speech when it feels threatened.” Subjects answering on their own agreed with the statement only 19% of the time. But when shown that four others agreed with the statement, a whopping 58% of subjects suddenly agreed also.

The Conformity Bias in Culture, Politics, and Economics

Groupthink is highly present in the realms of culture and politics; it influences what music we like, what clothes we wear, even which politicians we vote for.

One study examined how music becomes popular. A group of 14,341 participants was given a list of unknown songs by unknown bands and asked to evaluate and download the songs on the basis of brief samples. Half of the participants had to make their assessments entirely individually, on the basis of the band name, song name, and sample only; the other half, however, could see how many times each song had been downloaded. In addition, the half that could see the number of downloads was divided into eight “worlds” and could only see the downloads from those in their “world.”

The researchers found that, in each world, people were far more likely to download songs that had already been downloaded. They also found that songs that did well in the control group—the half that was judging without download statistics—could be popular or not in the various “worlds.” In short, a song’s popularity was more a function of its initial download statistics than anything else.

Sunstein and Thaler cite John Kerry’s improbable win of the 2004 Democratic nomination as an example of groupthink at work. Kerry’s campaign was all but dead when he managed a surprise victory in Iowa. He then won New Hampshire and a slew of primaries thereafter. The consensus among political analysts is that Democratic primary voters flocked to Kerry because voters perceived the party was rallying around him after his initial Iowa win.

Social influence affects not only what entertainment and politicians we prefer, but also how we spend and invest our money. Sometimes the financial advice of our neighbors can be helpful, but herd thinking in the economy can also result in major problems.

The 2008 financial crisis is a case in point. According to economist Robert Shiller, who was one of the few analysts to predict the crisis, speculative booms—like the one in the housing market that preceded the crash—are largely the product of “social contagion.” That is, people become overly optimistic about a particular investment, which drives up prices. The rise in prices is then covered by the media, and more people begin to invest in that area, attracting more media attention, and so on. In a speculative bubble, prices are a product of social consensus rather than actual value. (Shortform note: Read more about the 2008 financial crisis in our summary of The Big Short here.) 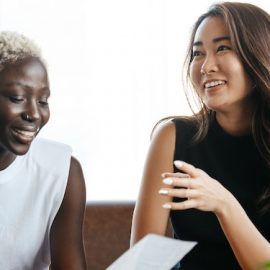 How to Get Past Trauma: Tips on Surviving