Who was Witty Ticcy Ray? Why do many patients who suffer from superabundance illnesses dislike the idea of treatment? How did Oliver Sacks compromise with Ray?

In his book The Man Who Mistook His Wife for a Hat, psychologist Oliver Sacks discusses brain illnesses that cause superabundance. One of his patients was Witty Ticcy Ray, a patient with Tourette’s Syndrome who allowed his Tourette’s to become a major part of his personality.

Here is Oliver Sack’s research on superabundance and his experience with Witty Ticcy Ray.

Disorders of superabundance make it difficult to control crucial aspects of our humanity—impulse, will, action, and passion. Patients who experience these uninhibited rushes often don’t feel ill or lost at all, as did some of the patients like Jimmie G. and Christina. Indeed, this other class of patients often reports feeling more alive and human than ever as a result of their disorder. The rich interior life of a person, once dormant and dull, can become truly activated by neurological illnesses.

But there is a dark side to this frenzy and mania. The excesses can subsume the individual. Illness can masquerade as wellness. The activation of pleasure centers in the brain caused by disorders like Tourette’s, syphilis, and even some forms of Korsakov’s syndrome can be powerfully addictive; the patient does not wish to be “cured,” because they do not believe themselves to be ill. Here’s one case of a person called Witty Ticcy Ray.

The first disorder of superabundance we’ll explore is Tourette’s syndrome. Tourette’s was first diagnosed in the late 19th century by the French physician Georges Albert Édouard Brutus Gilles de la Tourette (who gave the disorder its name). It was largely forgotten over the next century, thought to be a rare syndrome. It began to receive renewed interest within the neurological community, the media, and among the general public in the 1970s.

Associated with an excess of the hormone and the neurotransmitter dopamine, Tourette’s is characterized by an excess of nervous energy, commonly finding expression in repetitive motor movements called tics, as well as in verbal outbursts like coprolalia, the compulsive utterance of obscenities and slurs in socially inappropriate situations (these are called verbal tics).

Tourette’s can sometimes give the appearance of exerting a demon-like control or possession over its sufferers. The syndrome becomes their identity, blocking out all other aspects of the personality that lies beneath. Unnerving and frightening for outsiders to witness, Tourette’s patients can suffer severe social stigma and isolation.

In the most severe cases, the tics can go beyond physical gestures and verbal outbursts. They become tics of the mind, jerking perception and personality itself back and forth. Unlike severe forms of amnesia, the Tourette’s sufferer is all too aware of their disorder and the impulses it causes, constantly battling it in an epic psychic tug-of-war, a struggle to form their own identity from under the weight of Tourette’s.

In the 1970s, Sacks met a Tourette’s patient named Ray, who called himself “Witty Ticcy Ray.” He was 24 years old and had experienced severe tics since the age of four. Ray had suffered severe social stigma as a result of his condition and had been fired many times for his outbursts (he was known to yell obscenities like “Fuck!” at inappropriate times).

And yet, Ray had found the strength to forge a meaningful life for himself despite his affliction—indeed, it seemed to give him an entire identity. He was an accomplished jazz drummer and a masterful ping pong player, both fields in which the speedy reflexes and reactions caused by his syndrome appeared to give him an advantage. He was sharp and witty in repartee, which he attributed to the superabundance of energy due to Tourette’s. As Ray put it, “I consist of tics and nothing else.” It was, in short, an essential part of himself—one that he did not wish to lose.

Sacks began treating Ray with Haldol, an antipsychotic medication that blocks dopamine receptors in the brain and is also used to treat schizophrenia. Ray’s initial treatment with Haldol seemed to be effective and the tics disappeared. But they soon reappeared with a strange twist: they were slower, with Ray even becoming stuck in catatonic mid-tic states. Moreover, he had lost some essential part of himself. Ray was now slow and deliberate, unable to engage in the witty spontaneity and flights of inspiration that had so defined him. Worse still, he’d lost his musical fluidity as a drummer.

Sacks realized that medication alone would not be sufficient to treat Ray. He couldn’t just suppress the neurological basis of his syndrome; he needed to break Ray of his addiction to the wild thrill of Tourette’s, show him how rich and full his life could be without it. Only then could pharmaceutical options be exploited.

Ray wanted to maintain what he saw as the benefits of his tics, but be able to function better in the world. Sacks and Ray decided on a dual strategy—he would take Haldol during the weekdays but would stop taking it on weekends. On Saturday and Sunday, he would fully embrace his “Witty Ticcy Ray ” persona.

If Ray presents us with a hopeful story, however, we should be reminded of the psychic prison that the manic energy of Tourette’s imposes on many of its sufferers.

One day on the streets of New York City, Sacks saw an older woman wildly convulsing on the sidewalk. On closer inspection, he saw that she was imitating the people who passed her by on the street, grotesquely caricaturing and exaggerating their faces and gestures—each only for a split second.

The spectacle created a dizzying feedback loop. As people passed by the woman and realized what she was doing, they expressed their anger, bewilderment, and disgust. The woman, in turn, imitated these reactions in her highly stylized and lurid way, further eliciting more cycles of reaction and counter-reaction.

Eventually, the woman could maintain the dizzying imitation game no longer and ran to a nearby alley. There, she made a gesture of “expurgating” the personalities she had “consumed,” as if she had taken in her fill and could take no more. This was the tragedy of her condition—she was powerless to stop drinking in the demeanors and expressions of strangers, even when it clearly caused her great distress to do so. There was no self, just the masks and personas she borrowed from others. 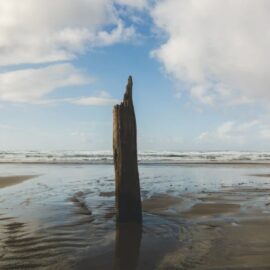 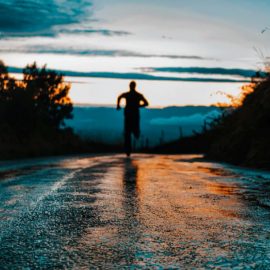