What is the problem with public housing? What does Milton Friedman suggest about how to fix these problems?

According to Milton Friedman, part of the problem with public housing is that it’s run by the government. He argues that this program is poorly designed and causes harm without alleviating poverty.

Read more about the problem with public housing and Milton Friedman’s ideas.

The Problem With Public Housing

Public housing programs are designed to alleviate the shortage of housing and ensure that everyone has a roof over their head. In the United States, federal housing programs destroyed existing housing units in urban areas to make room for new, government-subsidized housing projects.

This was counter-productive. The poor design of this program resulted in a net decrease in the supply of available housing units, because local special interest groups demanded that slums be cleared and that new government housing be set up in its place. Unfortunately, this sort of special-interest lobbying is central to how federal programs of this type work, as they inevitably come to serve the few at everyone else’s expense, which, according to Milton Friedman, is the problem with public housing.

With the public-housing program, this created a situation where more people had to crowd into fewer and fewer housing units, decreasing the standard of living for the occupants of these projects and taking a severe toll on the emotional development of children living there.

By concentrating housing projects in certain geographic areas of cities, federal housing policy created pockets of poverty. This, in turn, destroyed the tax base of these communities, leading to lower-quality schools and fewer economic opportunities to escape neighborhood poverty.

If the government wishes to alleviate housing insecurity, it would be better (and more in accordance with economic freedom) to give families direct cash grants to buy or rent homes in the neighborhoods of their choice. 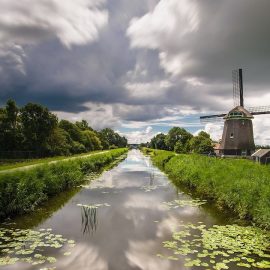 How Can We Adapt to Climate Change? Solutions for Water & Heat