What makes an idea sticky? What are some examples of sticky ideas? What is the secret to making a story or a message “stick”?

Sticky ideas are concepts, messages, and stories that “stick” in the public’s consciousness: they are understandable, memorable, and have a lasting impact. One of the most notable examples of sticky ideas are urban legends. Urban legends are easy to understand and remember, people buy into them and share them.

Keep reading to learn about the six traits of sticky ideas.

Some ideas naturally grab you—they’re inherently interesting. Others don’t—they seem to be inherently boring. But in a version of the nature versus nurture argument, most ideas and messages—even naturally less-than-thrilling ones—can be nurtured or designed for success.

Here’s an example of a story with staying power. In a city near you, a traveling businessman has a drink with a woman in a bar and blacks out. He wakes up in a hotel bathtub full of ice. He spots a note at eye level that says, “Don’t move, call 911.” His cell phone is beside him and, in a panicked state, he calls. The operator asks him to carefully check to see if there’s a tube sticking out of his back. When he finds one, she tells him he’s been the victim of a kidney harvesting ring and she’s sending the paramedics.

This story is an urban legend with countless versions differing only in the “local” details, such as the city where the incident took place. It’s so “sticky” or memorable that it’s been around for decades—and if you waited an hour and then called a friend, you could easily repeat the story.

Contrast the kidney heist story with a message from a nonprofit organization that begins, “Comprehensive community-building lends itself to a return-on-investment rationale…”. Anyone would be hard-pressed to remember and repeat it after even a few seconds. Such communications are the norm in many workplaces. They can’t compete with the kidney heist story in interest, but could well be the type of message you’re tasked to deliver.

You’ll find plenty of advice for successful communication: Start with a joke. Tell the audience what you’re going to say, say it, then tell them what you told them. Or, make sure you understand your audience and tailor your message accordingly. But these tips don’t help you create and shape your message so that it sticks.

Sticky ideas are understandable, memorable, and have a lasting impact. Here’s an example of a story that succeeds on all three levels: the Halloween candy tampering scare story.

Like the kidney heist story, it’s also false. But it’s indelibly changed how society functions. Poisoned candy rumors originated in the 1960s, followed later by stories about sick people putting sharp objects in apples at Halloween. Parents searched their kids’ candy, schools and fire departments offered safe Halloween events, and hospitals offered to X-ray kids’ treats. It even led to several state laws with penalties for candy tampering. But researchers in 1985 couldn’t find any instance, even going back to 1958, of a stranger causing life-threatening harm to a child by tampering with Halloween treats.

The story was understandable and memorable, so it had a lasting impact, even though it was false: it changed people’s behavior, even to today.

(Shortform note: The original candy tampering scare story was false, but it’s evolved into some real instances of tampering, although they remain rare. The greater danger to trick-or-treaters today is getting hit by a car.)

Other urban legends continue to get traction, although with less tangible impact than the Halloween tampering story. They include assertions that:

(Shortform note: The explosion of social media since 2007, when this book was published, continues to fuel the spread of hoaxes and false stories like the above. But it’s also provided easy ways to check a sticky story’s veracity, for those who make the effort to do so.)

The kidney heist story also has elements of the unexpected, has concrete images and details, and generates horror and other emotions. Other forms of successful communication share these traits, which can be codified into six principles for making an idea stick. They spell the acronym SUCCESs—Sticky ideas are Simple, Unexpected, Concrete, Credible, Emotional, and tell Stories.

An idea doesn’t have to apply all of the principles to stick, nor does applying all of them guarantee stickiness. But they’re a useful guide, not only for shaping your ideas, but for spotting naturally sticky ideas you can use. Here’s an overview (a full chapter is devoted to further exploration of each principle).

1) Simple: To make a message or idea simple means distilling it to its central point or essence by cutting away nonessential information, like getting to the core of an apple. Making an idea simple isn’t enough—it must be both simple and meaningful. Proverbs are a good example, as is the Golden Rule, a sentence that you could spend your life putting into practice.

2) Unexpected: A sticky message surprises people by defying expectations. While surprise gets an audience’s attention, however, it doesn’t last. To hold attention, use the unexpected to also generate curiosity and interest.

3) Concrete: Ideas must be concrete in order to stick: think of apples with razor blades in them or a buffet of fatty food versus a single bag of popcorn. In contrast, many messages in business are ambiguous and no one interprets them the same way. The abstract must be made concrete so that it means the same thing to everyone, like the proverb, “A bird in the hand is worth two in the bush.”

4) Credible: To be credible, sticky ideas must have external credibility (an authoritative spokesperson or source) and internal credibility, which means they’re supported by details, data presented in an accessible way, a compelling example, or a way for the audience to verify the message (try before you buy). For example, instead of presenting statistics on the lagging economy in 1980, then-candidate Ronald Reagan suggested a self-test, “Before you vote, ask yourself if you’re better off today than you were four years ago.”

5) Emotional: To get an idea to stick, you need to get people to care about it. To make them care, you arouse emotions—you make them feel. The movie popcorn message generated disgust, while the Halloween candy tampering message generated fear. Nonprofit organizations seeking donations generate emotions by showing you people—here’s a starving child named Rokia—rather than presenting abstractions such as statistics. The trick is determining what emotion you want to generate.

6) Stories: Telling stories is the best way to make a message memorable and get people to act on it. Stories motivate people to act through inspiration. But more importantly, they tell people how to act—stories are simulations in which listeners think through what they’d do in the same situation. They’re mental flight simulators. For instance, firefighters and medical personnel can learn how to respond to crises from the stories of colleagues.

Once you understand the elements of sticky ideas, it’s easier to create your own and get your message across.

What Is a Victim Mentality Really About? 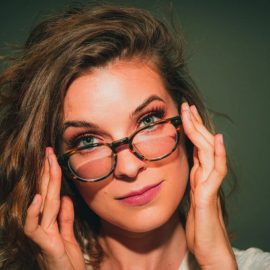