How did the invention of the electronic telegraph undermine print-based discourse? How did the inclusion of photography add to the telegraph’s assault on print culture?

The electronic telegraph was invented to send messages over long distances and create the opportunity for a national conversation. But in the process, the relevance of information was undermined and newspapers started printing decontextualized information.

Keep reading to learn about the history of the telegraph and how it paved the way for the entertainment era.

The Invention of the Telegraph

Two technological developments in the mid-19th century changed public discourse and paved the way for the Age of Entertainment. The first was the invention of the telegraph, which removed the constraints on communication of speed and distance; the second was the development of photography, which replaced words with images.

The history of the telegraph began in the mid-19th century. By then, America had expanded to the Pacific. However, the difficulties of communicating over long distances limited national cohesion—the nation was a patchwork of regions with their own interests.

The problem was solved with the invention of the electrical telegraph, which could send messages over long distances in the form of coded pulses of electrical current transmitted through wires. By connecting the country with a communication network, the telegraph created the opportunity for a national conversation. But in the process, it redefined information and changed the meaning of public discourse altogether.

The telegraph undermined the key components of print-based discourse: relevance, usefulness, and coherence, which are closely related. These effects were exacerbated by newspapers—the penny press of the 1830s developed hand-in-hand with the telegraph.

The telegraph changed the definition of information by eliminating the requirement that it be relevant to the recipient.

Henry David Thoreau was one of the first to recognize that while the telegraph could send information great distances at lightning speed, a lot of what it sent might not be especially relevant to those on the receiving end. For instance, he wrote that connecting the old world with the new by running wires under the Atlantic was a dubious accomplishment if the system was used merely to report that Princess Adelaide had the whooping cough.

Newspapers played a role by seizing on the opportunity to obtain and publish information from far-flung places. Previously, they had focused mostly on community information relevant to local issues and decisions. But they soon began promoting non-local information received by telegraph and giving it greater prominence. Publishers rushed to back efforts to fully wire the nation.

Soon after the telegraph system spread, the Associated Press was founded in 1846 to gather information from around the world and disseminate it to everyone. Relevance had become irrelevant. Crimes, disasters, and wars, and other telegraphic content, were packaged and presented as “the news of the day.”

The telegraph and newspapers also decontextualized information and turned it into a commodity. It didn’t need to have a value to the recipient or serve any local purpose other than stirring interest or curiosity.

In oral and print-based cultures, information’s importance depended on its utility or the possibility it presented for action. You could do something with it to affect your life or community. However, the telegraph and subsequent technologies have disconnected information from action. We have an information glut and, at the same time, a diminished sense of agency or control.

Today, the ”news of the day” (unless it’s the weather forecast) rarely prompts you to do anything or helps you solve a problem. The news is something to talk about, but you can’t respond in any meaningful way. For instance, you can’t do anything about Middle East conflict, the crime rate, or unemployment. When the context is global, information disempowers.

Besides eliminating relevance and value, the telegraph undermined public discourse by making it incoherent.

Print culture’s strength is the exposition and analysis of information. The telegraph’s strength was simply moving information fast. Messages were quickly replaced by new messages with no connection to what came before or after.

Intelligence no longer meant understanding context or implications. It simply meant knowing a lot of disparate, fleeting things in the form of sensational headlines. The telegraph created a disorderly, disconnected conversation of strangers.

Adding to the telegraph’s assault on print culture and coherence was the development of photography in the 1840s and ‘50s, starting with the daguerreotype.

The early process of producing photos was complicated, involving an iodine-sensitized silvered plate and mercury vapor. But it soon evolved to a more efficient process of preparing a negative from which multiple positives could be made. Mass printing and publication of photos followed.

Like the telegraph, photos eliminate context. Photography removes images from context to present them in a different light. A photograph represents only an instant; it presents the world as disconnected moments or events. Photos can’t present ideas, only isolated objects.

Images have been around since the days of cave paintings, and they coexisted with words until photography launched an all-out war on language. Imagery—which quickly permeated American culture as photos, illustrations, posters, and advertisements—began to displace print in shaping our understanding of the world. While print culture viewed the world as rational, the growing image-based culture viewed it as chaotic and disconnected.

The image helped redefine information and news as having no continuity or importance apart from entertainment. “News” magazines such as Life and Look showcased dramatic or glamorous photographs lacking newsworthiness. Newspapers and advertisers learned that attention-grabbing images had a greater impact than explanatory writing. Seeing became more persuasive than reading and thinking.

The Joint Effects of the Telegraph and Photography

The partnership of photography and the telegraph reshaped the news. Photos gave concreteness to faraway datelines. A photo, news story, and headline together created a feeling of context, but without any past or sense of continuity. It was a “pseudo-context,” created for information of no value beyond entertainment.

Today, since we still can’t use fragmented information for anything serious, we use it for entertainment and distraction—for example, in crossword puzzles, TV game shows, and games like Trivial Pursuit.

Photography and the telegraph didn’t kill print culture immediately—there was a burst of great literature in the early 20th century including magazine stories and novels by Faulkner, Fitzgerald, Steinbeck, Hemingway, and others. But the era was print culture’s swan song.

The electronic media that developed in the late 19th and early 20th centuries—television, film, and radio—accelerated the trends begun by the telegraph and photography. They created a disjointed, senseless world, where events constantly pop up and disappear from our view.

By providing a constant stream of compelling images unrelated to our lives, television culture has turned us from engaged citizens to a passive audience waiting to be entertained. Television tells us reality or life isn’t rational, so it must be entertaining.

Entertainment, in itself, isn’t a problem. The problem is that television and its metaphor of reality as entertainment have taken over our homes and reshaped every aspect of public life—education, religion, science, sports, news, and business—and how we understand it. We’ve come to judge everything by its entertainment value.

Television has become the background sound of our lives. The world it creates seems familiar and natural. We don’t notice how it shapes what we believe to be the truth or reality. When something doesn’t seem strange, it means we’ve adjusted to it by changing ourselves.

We’ve so completely accepted television’s metaphor of reality that we mistake its irrelevance for substance and its incoherence for meaning. Anything that doesn’t fit television’s frame seems strange rather than the other way around. (Shortform note: Postman doesn’t give examples, but a contemporary example would be how we dismiss and “tune out” public officials who discuss nuances of issues; instead, we expect them to speak in entertaining sound bites.)

The purpose of this book is to make visible television’s epistemology—how it shapes truth, knowledge, and reality, and how it’s transforming our national culture and conversation into entertainment. 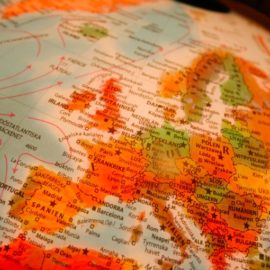