How did capitalism take hold as a major world economy? How much of an influence did religion have?

Max Weber argued in his 1905 classic that the early Protestants in western Europe and America pioneered the way of life that became the modern capitalist’s lifestyle. And, in doing so, they provided the cultural and financial impetus for capitalism to become a full-fledged economic system.

Continue reading to learn how the spirit of capitalism arose from the Protestant ethic.

The Spirit of Capitalism

Weber suggests that all of these changes had taken hold by the late 1700s and early 1800s.

(Shortform note: Scholars have debated Weber’s precise thesis for decades. Some believe that Weber is saying that Protestantism created capitalism, and others point out that he never explicitly states this. Weber instead makes a heavily qualified argument that Protestantism did, in some ways, contribute to the development of certain aspects of the attitudes and lifestyles necessary to the onset of modern capitalism. This nuance is often lost in looking to distill and simplify his works.)

The first way that Protestantism influenced capitalism took place in the divide between the wealthy and the common person. When some Protestants began to get wealthy, they became more confident in their status as the elect. Over time, Weber says, those wealthy Protestants who succeeded in their callings drew themselves apart from those who didn’t. The successful saw themselves as morally superior to the unsuccessful, who God evidently didn’t favor.

This led to divisions in the church. The elect created sects entirely apart from the reprobate; you could only get in if you’d proved yourself before God and community. In other words, if you’d become successful in your calling.

(Shortform note: The theological position for these divisions was the notion of the “visible” versus the “invisible” church. The visible church is the physical, outward expression of the church—physical buildings, ceremonial robes, altars, and so on. The invisible church, according to Protestantism, is composed only of true believers who have been “born again” through genuine faith. As a result, divisions arose between the elect, who felt themselves to be the only genuine Christians, and those they perceived as reprobate, who attended the visible church but weren’t considered members of the invisible church.)

As this occurred, the successful elect determined that it was morally appropriate for them to use the labor of the reprobate. Since God gave everyone their station in life, the elect felt it was only right that, as God’s chosen people, they could exploit the reprobate. At the same time, the reprobate Protestants also felt that it was their place to work long and hard hours. After all, that was God’s will for them. Even if God didn’t seem to have chosen them, they still felt compelled to serve and glorify him.

This dynamic, Weber argues, presaged the economic divide between the capitalists, who own the means of production, and the workers, who trade their labor for wages. He implies that it provided the moral justification that allowed capitalists to exploit the labor of the poor and underprivileged. It also allowed them to view economic inequality as morally just, since it was God’s will that some succeed and some fail.

(Shortform note: Marx would argue that Weber isn’t telling the full story of labor exploitation. Specifically, he doesn’t account for the phenomenon of “primitive accumulation,” a concept that denotes how violent force allowed the powerful to take land and resources from the common people. Nobility and those with physical power made this land private property, forcing the common people to work for them or look for a living in emerging cities. This “enclosure of the commons” was, according to Marxist thought, a main factor in the onset of labor exploitation and class struggle in the modern era.)

In a related vein, the Protestants’ willingness to work for its own sake also created a distinct morality: Whether something was good depended on whether it was useful to glorify God. This attitude was passed on to capitalism, minus the emphasis on God.

Weber says that, as the successful Protestants began to get wealthy, they also became more secularized. Into the 18th century, the religious zeal that fueled the earliest Protestants began to lessen. As serving God in every moment became less of an immediate imperative, people lost the association between “usefulness” and “glorifying God.”

(Shortform note: As a formal moral system, utilitarianism was first articulated by Jeremy Bentham in the late 1700s, though earlier thinkers laid the groundwork in the 1600s. Put simply, utilitarianism holds that moral actions are those that produce the greatest good for the greatest number of people. Early thinkers reasoned that what is good is human happiness, and that because God wants humans to be happy, we should maximize happiness. This view isn’t explicitly Calvinist, but it may have contributed to the later secular position that we should maximize the productivity of our actions. In this view, a business that solves a problem for many people is doing something good—which would’ve helped business owners feel morally upright.)

At the same time, these wealthy Protestants retained their systematic, rigorous lifestyles. They began to focus more on money than God; money took God’s place in their moral equations. What qualified as useful became what helped them earn money, rather than what glorified God. Weber argues that this led to the utilitarian capitalist attitude that “time is money,” which was common by the time of Benjamin Franklin (mid to late 1700s).

(Shortform note: Franklin is credited with having said “remember that time is money” in his letter “Advice to a Young Tradesman.” This short passage was published in the 1770 book The American Instructor, which contains contributions concerning mathematics, writing, basic business and accounting strategies, as well as advice about medicine and personal health—making it one of the earliest American business and self-help titles. Note also that while Weber takes Franklin’s ideas as characteristic of the American business spirit, others argue that they shouldn’t be taken as a bellwether for the age, and that Franklin was simply offering advice rather than espousing moral imperatives.)

Weber acknowledges that people did engage in capitalist activity before the Protestant Reformation. However, they did so unsystematically. As we discussed in “The Protestants Became Rational Economic Actors” section of this guide, the traditional economic style was to earn only as much money as you needed to maintain your life. This changed with the Protestants, who pioneered the unique blend of beliefs, morals, and habits that resulted in a lifestyle of systematically pursuing wealth.

(Shortform note: Some argue that the Protestants were not the first people to operate a capitalist economy. Ferdinand Braudel, a 20th-century French historian, described the development of commerce and capitalist patterns throughout European history and says that 13th- and 14th-century Italy and France were capitalist. These areas had complex systems of credit, banking, and commerce well before the Protestants’ time. Here, though, note that Weber edits the second version of his argument to acknowledge that he describes the origins of modern capitalism, rather than capitalism in general.)

As the early Protestants’ religious zeal faded, Weber suggests that pursuing wealth for God’s glory became the notion that wealth was the end in itself. In turn, the systematic way of life pioneered by the Protestants lent itself to economic success. As such, the increasingly secularized Protestants inherited the methodical, meticulous, and frugal way of life that became the modern capitalist’s lifestyle: Wake early, stay healthy, work hard. Waste no time; be productive and efficient. Account for all your wealth, and reinvest to grow it.

Most importantly, the Protestants’ asceticism led to the accumulation of capital that was necessary for capitalism to become a full-fledged economic system. Whereas previous classes of wealthy people would purchase land and seek to become nobles, the Protestants invested. Instead of spending money on something that wouldn’t give a return, they put the money back into their own businesses and the stock market. Weber implies that this investment activity gave the early capitalist economy the kick-start it needed to gain momentum in America and western Europe.

(Shortform note: While Weber wrote The Protestant Ethic in 1905, this economic way of life echoes still today, especially in the life philosophies espoused by figures such as Warren Buffett and other investing giants. Buffett is a more modern example of the “spirit of capitalism,” having worked for decades, sticking to a systematic strategy for life and investing, and living frugally despite becoming wealthy. Weber might say this isn’t a coincidence, given that Buffett was raised Presbyterian, one of the main Calvinist sects.) 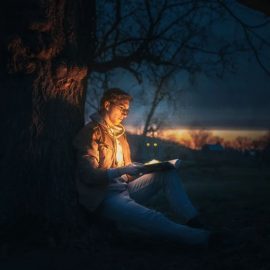