What was Millennium Challenge 2002? What can we learn from the war game about balancing structure and spontaneity to make excellent snap decisions?

Millennium Challenge 2002 was a war game planned by the military’s Joint Forces Command (JFCOM). During this battle, Paul Van Riper proved that snap decisions, if made in a structured environment, can be far more effective than deliberation.

Read on to learn how you can apply these lessons, too.

The Battle Between Two Military Philosophies in Millennium Challenge 2002

Many military commanders (and laymen) believe that if you have enough information, you can win a war with deliberate decision making and a systematic approach. Retired Marine Corps officer Paul Van Riper demonstrated that this doesn’t always work. War is inherently messy and requires spontaneous decision making.

In Millennium Challenge 2002, JFCOM, the planners of the game, asked Paul Van Riper to play the part of a rogue military commander threatening to start a war in the Persian Gulf. The military tests its new strategies through these types of games.

In all war games, including Millennium Challenge 2002, there are two teams:

While preparing for Millennium Challenge 2002, the two teams had very different philosophies of war.

Blue Team operated on the assumption that with enough information, you can fight a war in a rational and systematic way. They believed that war requires deliberate, rational decision making.

This approach focused on the details. They took into account the enemy’s political, economic, cultural, and institutional environments, not just their military system.

Blue Team had the most sophisticated resources and systems of any army in history. They were confident that, with their systems and the detailed information they provided, their victory was a done deal.

Paul Van Riper’s Red Team operated on the assumption that war is, by its nature, unpredictable. You can’t fight an unpredictable war with a systematic approach. They believed that war requires spur-of-the-moment decisions that change according to changing situations. They also took it for granted that all of this happens in an environment of extreme stress.

Rather than focusing on the details like Blue Team did, Red Team took a more holistic approach.

Spontaneity Within Structure: A Winning Strategy for Millennium Challenge 2002?

Although Paul Van Riper placed importance on snap judgments, he made sure to create the structured conditions necessary for these snap judgments to be good ones. Van Riper’s motto was “In command and out of control” (taken from management guru Kevin Kelly).

Paul Van Riper had both the experience (fighting in Vietnam) and the knowledge (he was well-read in military theory and strategy) to prepare him to make good decisions in Millennium Challenge 2002. Red Team’s goal was to overwhelm Blue Team from every direction, and Paul Van Riper trained his officers on techniques for doing this.

But beyond this initial structure, Paul Van Riper required that his officers make their own decisions and take initiative during battle. He didn’t want them losing precious time and smothering their instincts by continually checking in with him or holding meetings to analyze their options.

The Battle of Millennium Challenge 2002

Those who knew the details of Millennium Challenge 2002 assumed Blue Team would win.

The Advantages of Blue Team

The Disadvantages of Blue Team

Blue Team thought they could win Millennium Challenge 2002 logically, and so held several assumptions about their enemy. Red Team thwarted their assumptions at every turn.

They couldn’t. Red Team communicated via messengers on motorcycles rather than satellite.

Assumption #2: Blue Team assumed they would know when Red Team was about to launch their planes because they would overhear the communication between Red pilots.

Red Team knew Blue Team would try to listen to their conversations, so they used a lighting system to communicate, a technique borrowed from World War II strategies.

Red Team sent small and presumably inconspicuous boats to keep an eye on the Blue Navy.

Assumption #4: Blue Team thought Red Team would be overwhelmed because their army was so much smaller than theirs. They assumed Red Team would wait in a position of defense, so they adopted the strategy of preemption.

Red Team didn’t let Blue Team strike preemptively. Red Team struck first in a surprise attack, knocking out half of Blue Team’s ships with cruise missiles. If this had been a real battle, 20,000 American lives would have been lost (before Blue Team even fired its first shot).

Red Team relied on the power of their snap decisions, and these decisions were ultimately much more effective than the well-informed, meticulously planned decisions of Blue Team. Blue Team was too focused on the details. They never looked up from the facts long enough to take in the big picture, which would have let their unconscious minds sift through the information and narrow in on the most important details.

After Red Team’s surprise attack, the JFCOM staff decided to start the game over. They gave Red Team a script and told them to stick to it. This script left no room for spontaneous decisions. Paul Van Riper claims that if JFCOM didn’t like the result of a battle, they would just run the simulation again.

JFCOM didn’t learn the value of spontaneous, snap judgments. With Red Team constrained by their script, Blue Team easily won the second round of Millennium Challenge 2002, and the analysts at JFCOM and the Pentagon rejoiced over the victory of their well-thought-out plan. This was the plan they implemented in their invasion of Iraq in 2003.

JFCOM may not have learned the value of making snap judgments, instinctual decisions based on the information we have in the moment, but we can learn from Millennium Challenge 2002. Paul Van Riper took major risks in limiting the amount of information he and his team used to make decisions, but the payoffs were big. They were able to mitigate their risks by preparing and rehearsing ahead of time. Deliberate decisions lay the foundation for solid snap-judgments.

The lesson of Millennium Challenge 2002: When making a decision, focus only on the most relevant details. Do your prep beforehand, but when it comes time to make your decision, trust that you’ve prepped well and follow your instincts. 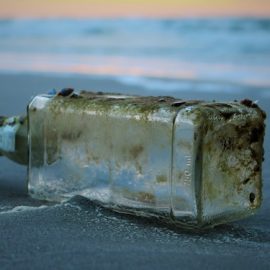 How to Distill the Core Message of Your Idea

How to Improve Conversation Skills: Tips From Pros