Is it legal to use perceived race in the decision to pull someone over? Why do black people get pulled over more often for equipment-related violations?

In her book Biased, Jennifer Eberhardt explains that it is actually legal for police to pull a driver over based on perceived race. This has led to a disproportionate amount of blacks being pulled over for minor equiptment-related violations in an excuse for the officer to search them for contraband—this has lead to the term “driving while black.”

Here is what Eberhardt has to say on the “driving while black” epidemic.

Police officers’ officially sanctioned biases are on display when they make decisions about who to pull over for equipment-related violations (like expired tags or a broken tail light). It’s often up to the officers’ discretion to decide if a minor equipment issue is worth the time and resources it takes to stop someone. That freedom often becomes an excuse to act on unchecked biases: An analysis of 18.5 million traffic stops over six years found that black drivers are more than twice as likely to be pulled over for equipment-related issues than white drivers.

(Shortform note: Surprisingly, this type of discrimination isn’t illegal. In The New Jim Crow, Michelle Alexander describes how, according to the Supreme Court ruling in United States v. Brignoni-Ponce, it’s legal to use perceived race in the decision to pull someone over so long as race isn’t the only factor.)

Why do police stop more black people? Biased author Jennifer Eberhardt believes that pulling someone over gives officers an excuse to search that person for contraband (like drugs or unregistered weapons), which could lead to another crucial tally in their arrest count. To increase those odds, cops rely on the bias linking black people with criminality and assume that stopping black drivers is more likely to result in an arrest. But that assumption is flawed—a federal report on Ferguson, Missouri (where police shot and killed 18-year-old Michael Brown in 2014) showed that black people were more likely than white people to be searched, but less likely to have contraband on them. Crucially, the federal report concluded that racial disparities in police stops did not reflect actual differences in crime rates and were exclusively the product of racial profiling.

(Shortform note: The same is true all over the country: Research shows that white people and black people use illicit drugs at roughly the same rates. However, since white people make up 76% of the U.S. population, there are more white drug users than black drug users in total.)

Disproportionately stopping black drivers has a powerful cultural and economic impact, but Eberhardt argues that many black people worry about even bigger consequences than arrest or a citation. Every year, 11% of police shootings happen during discretionary stops. That’s a serious communal trauma, and it’s the reason many black drivers are terrified of being pulled over—if the situation escalates, it could be a death sentence.

The “Respect Deficit” in Police Interactions

Ordinary traffic stops can escalate into deadly encounters for many reasons, including police officers’ language and tone of voice. In the first part of a two-part study, Eberhardt studied footage from almost 1,000 traffic stops in Oakland, California. Her multidisciplinary team of researchers isolated 36,000 utterances (individual words and phrases directed at the driver during the stop). College students rated a sample of those utterances based on friendliness, respectfulness, politeness, formality, and impartiality. Oakland officers scored well in every category overall, but they were significantly more professional with white drivers than black drivers.

In the second part of the study, the team collapsed those five variables into a single variable: “respect.” They identified the utterances that students rated as highly respectful and used a computer program to scan transcripts of traffic stops (a total of nearly 500,000 words) for those high-respect words. This second, much larger data set yielded similar results: As a whole, Oakland officers were respectful to the drivers they stopped, but significantly less so with black drivers. (Shortform note: In a podcast interview, Eberhardt specified that Oakland officers were more likely to use the titles “sir” and “ma’am” for white drivers and more likely to address black drivers as “bro” or “dude.”)

Both black and white police officers show this “respect deficit” regardless of the driver’s age, gender, or criminal record. The severity of the offense doesn’t matter—officers are more respectful to white people driving recklessly than to black people with expired tags. The difference is so significant that a computer algorithm can correctly identify the race of the driver based solely on the words the officer uses during the stop. 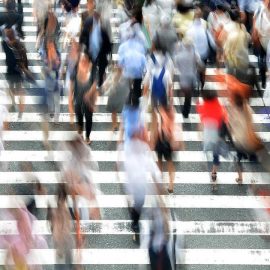 GDP and Standard of Living: Are They Even Related?