What is a digitally connected society? How is society becoming more connected? What will it be like when we’re fully connected?

According to author Shoshana Zuboff’s book, The Age of Surveillance Capitalism, big tech companies have incentives to develop a digitally connected society. Zuboff explains that, by creating a world where we are always connected to and dependent on technology, these companies will reap the most profits.

Read on to find out what Zuboff says a fully connected society would be like and what social issues arise.

A Connected Society in the Future

As an example of what a fully connected society would look like in the future, Harvard professor Shoshana Zuboff cites a patent application by Microsoft for a device that would monitor human behavior to detect anything abnormal, such as excessive shouting. The device could then report those abnormalities to individuals like family members, doctors, or law enforcement.

(Shortform note: Since the publication of Zuboff’s The Age of Surveillance Capitalism, Microsoft has filed for similar patents, such as one for a system of sensors that would monitor employees’ body language, facial expressions, speech patterns, and mobile devices to track a meeting’s overall quality in real time. Although they haven’t stated it as their intention, Microsoft could use such sensitive data to surveil and control employees in the manner that Zuboff describes.)

Zuboff explains that to reach a point of total predictability, companies’ control over our behavior needs to be all-encompassing. To accomplish this, companies want to create a society in which people and devices are connected at all times.

(Shortform note: We may be closer to the existence of the connected society that Zuboff describes than you may think. Meta (previously Facebook) is currently designing the Metaverse. This is a type of cyberspace that uses technology like virtual and augmented reality to blend the physical with the digital world. Once created, the Metaverse could facilitate the type of connection and control that Zuboff describes.)

How Society Will Change

Zuboff argues that in this type of connected society, relationships within the community would fundamentally change, and algorithms would replace familiar social functions—like supervision, negotiation, communication, and problem-solving—that govern current civilization.

(Shortform note: While Zuboff focuses her discussion on the future role of algorithms, researchers say that the current use of algorithms is already negatively impacting our society. In particular, our reliance on algorithms has led to the persistence of bias, deepening social divides, and the rise of unemployment.)

Zuboff identifies several social principles that would underlie this new reality. First, in a connected society, we would prioritize the collective over the individual. Companies would justify total control over our behavior by arguing that it’s “for the common good.” Furthermore, valued concepts like privacy and individuality would cease to exist for the sake of total connection and harmony.

(Shortform note: From a philosophical standpoint, there are counterarguments to Zuboff’s warnings about prioritizing the common good and forgoing freedom. For example, some would say that the concept of “common good” doesn’t exist, because each individual has unique experiences. Therefore, there’s no single policy that could benefit everyone, and companies couldn’t aim for such an ideal. On the other hand, others would argue that the total transparency of a hyper-connected, data-driven world would be its own kind of freedom, as it would allow us to understand far more about the world around us.)

In addition, instead of relying on the negotiation and compromise of politics to make decisions, in a connected society, automated systems would quickly compute certain solutions for the greater good.

Once they’ve determined specific solutions, companies would manipulate connections between people to drive change. In other words, they would influence your actions by exploiting your desire to “do what your friends are doing.”

How to Be More Interesting: Talk Less and Listen More 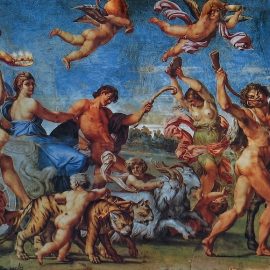 What Is the Purpose of Myth? Jordan Peterson’s Answer