Why is concrete communication important? How can presenting information in concrete terms make it resonate better?

Many ideas fail to stick because they are presented in abstract rather than concrete terms. They are unconnected to specific things that people easily grasp. You need to use concrete communication if you want your message to resonate.

The “C” in the SUCCESs formula for creating “sticky” messages stands for “concrete.” Many ideas fail to resonate because they’re presented in abstract terms, language unconnected to a specific person, object, or situation. Abstract communication makes ideas harder to grasp and remember; abstract instructions are harder to implement because they can be interpreted in different ways. The curse of knowledge comes into play when experts forget what being a novice was like and instead speak in abstractions.

The opposite of abstract communication is concrete communication. Concreteness the third essential characteristic of a sticky message.

Fables are one of the best examples of concrete communication. Consider Aesop’s fable of the fox and the grapes: A fox came upon some grapes high on a vine, but after jumping at them repeatedly, he couldn’t get them. So he walked away muttering that they were probably sour anyway. An abstract admonition to be graceful in defeat wouldn’t have had the impact or longevity of the fable, which concretely demonstrates what we still refer to as a “sour grapes” attitude.

What sets concrete communication apart is specificity. The words “high performance” are abstract while “V-8 engine” is concrete. A company’s strategy is abstract, but its software is concrete. Nordstrom’s goal of extreme customer service is abstract; a Nordie gift-wrapping something bought at Macy’s is concrete.

So how do you make your message as concrete as a fable, so people understand and remember it? Here are some ways.

Researchers studying Japanese teaching methods found that the teachers practiced concrete communication—explaining abstract math concepts by connecting them with concrete, familiar things. They used this approach about twice as often as teachers in the U.S. did.

For instance, to explain subtraction, a teacher placed fifty tiles on a desk in five rows of ten each. She removed three rows and asked the students how many were left. The demonstration gave them a visual image of subtraction.

The teachers taught abstract math principles by first creating a concrete foundation or context, which can be useful for communicating other kinds of messages as well. For instance, if you write a recipe instructing the cook to stir soup to a hearty consistency, it won’t be useful unless you provide context on what “hearty” means.

2. Immerse Them in the Story

Accounting principles, such as balance sheets and accounts receivable, became concrete when Georgia State University professors turned an introductory course into a semester-long simulation. Students participated in the “launch” of a business selling a new product called Safe Night Out or SNO, a tracking device parents could place in a teenager’s car.

The students first had to determine the idea’s feasibility, then set up a system for tracking production, sales, and delivery costs. They discovered the difference between fixed and variable costs, which are key accounting concepts that can be hard to grasp from a traditional lecture. They dealt with challenges such as cash flow and bounced checks, and an unexpected request to lease the devices rather than buying them.

Using concrete communication in introductory accounting paid off: The top-performing students who took the course were more likely to major in accounting and even the average students did much better in the next accounting course.

People sometimes think of memory as being like a filing cabinet, where memories are filed or stored until you need to retrieve them. But it’s misleading because different types of memories are accessed in different ways. For instance, your brain remembers the words of a song differently than how it remembers what your childhood home was like. When you recall song lyrics, you “hear” the music and the artist. When you recall your house, you might mentally walk through the rooms, remembering sights, sounds, and smells.

When your goal is helping listeners remember your message, it’s more useful to think of memory as working like Velcro, the hook-and-loop fastening system. Messages with more hooks stick better to the brain’s loops or memory.

Experts and novices in the same situation think differently about it. Experts often think abstractly, which creates a barrier to communication. They see details as representing a system, concept, or idea, which they’re inclined to talk about at a high level, while novices focus on the details.

Here’s an example of how experts’ tendency toward abstract communication rather than concrete communication made it difficult to solve a problem at a manufacturing company.

When a machine broke down, the manufacturing workers described what happened to the engineers. But instead of identifying the immediate cause and telling—or, better yet, showing—the line workers how to fix it, the engineers started reworking their blueprints. They viewed the problem in the abstract and when they presented their revised drawings to the line workers, nobody understood them. To communicate, the experts needed to speak the concrete language of the machine operators, focused on what the machines did when the operators took various actions.

People can’t work together when they speak different languages. To bridge the communication gap between your expertise and your audience’s, you need to use concrete communication and speak at your listeners’ level of understanding.

Companies set goals in an effort to coordinate the actions of many people. However, when leaders are abstract rather than concrete about what they want to accomplish, they create uncertainty, which impedes progress.

For instance, a company might announce an abstract goal of building the next great search engine. One programmer might focus on speed in returning search results, while another might focus on completeness. Progress can’t be made until everyone is moving in the same direction and understands, in concrete terms, what it means for a search engine to be “great.”

In the 1960s, Boeing succeeded in aligning the efforts of hundreds of people designing and building a new aircraft, the 727 passenger plane, with a concrete goal: it has to seat 131 people, fly from Miami to New York nonstop, and land on LaGuardia runway 4-22 (which was unusually short). This concrete goal dictated thousands of design and manufacturing steps. In contrast, it would have been much more difficult to implement an abstract goal of building the world’s best passenger aircraft.

A simulation that lets people experience your idea is another approach to concrete communication. For example, in 2002, Hewlett-Packard wanted to persuade Disney to use HP technology in its theme parks. HP could have created a typical PowerPoint presentation, but opted for radical concreteness instead.

They hired an innovative consulting firm, Stone Yamashita Partners, which created a 6,000-square-foot exhibit starting with a simulation of a family’s living room and progressing through the phases of a trip to Disney World. It was a sensory experience for viewers. For instance, the exhibit showed HP technology helping a family buy tickets, schedule dinner reservations, and reduce waiting times for rides. When the fictional family returned to their hotel room at the end of a long day, the exhibit showed them finding a digital picture frame displaying their ride on a roller-coaster.

The exhibit, which was set up on the HP campus, helped engineers focus on creating technology to meet the real-life needs of a family, and it made the value of that technology concrete for Disney executives.

Concrete communication can also create a platform or jumping-off point for others to build on the concept.

For example, in 1987, Jerry Kaplan, a young entrepreneur, used a simple, concrete visual to sell an idea to venture capitalists by triggering their imaginations. Kaplan started by describing his idea for a notebook-sized computer using a pen rather than a keyboard for taking notes, sending and receiving messages via cellular technology, looking up contacts and phone numbers, using spreadsheets, and so on.

When he finished, the audience was silent, so he did one more thing. He tossed his leather folder onto the table, as a visual representation of the next ground-breaking computer. Once they were able to visualize the size and compactness of the proposed computer, the investors began asking questions and sharing ideas. A few days later, they agreed to back the idea of the tune of $4.5 million.

To help you think concretely when framing your message, focus on people, not data. Here are two examples of this form of concrete communication.

Of the six principles for crafting a message that sticks, concrete communication may be the easiest to apply. However, it’s often neglected because of our tendency to return to the comfort of abstract communication, like engineers tinkering with their drawings. 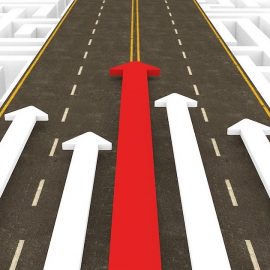 The 4 Traits of a Profitable Technological Monopoly

5 Types of Customer Groups & How to Target Them