Why do we lie about our motives? Why do we seek to deceive others and ourselves about the reasons for our behaviors?

At first glance, the idea of hidden motives may seem convoluted. The answer, according to Kevin Simler and Robin Hanson, is that, as a cooperative social species, we evolved to advance our own interests while appearing as selfless as possible—and it’s easier to deceive others if we’ve already deceived ourselves.

Let’s explore this theory about why we tell lies about our reasons for doing what we do.

Where Hidden Motives Come From

Why do we lie to ourselves and others about our motives? Norms of society evolved as a way to enforce pro-social behaviors such as cooperation, sharing, and non-violence. So, our selfish motivations are at odds with the norms that govern us. But, rather than making humans less inherently selfish, Simler and Hanson say that norms led humans to evolve ways to advance our selfish motivations while appearing to adhere to social standards. In other words, we’ve developed a whole range of strategies for avoiding norm enforcement so that we can get away with “cheating” at our social games. These strategies include:

Each of these strategies relies on deceiving other people—the idea is that we can act selfishly and competitively while convincing everyone that our motives are pure and we’re obeying social norms. But, according to Simler and Hanson, we often don’t realize we’re using these strategies—because deception is easier to pull off when we believe our own lies, we evolved to deceive others and ourselves simultaneously.

(Shortform note: Again, it’s unclear just how unconscious many of these behaviors are. Authors from Niccolo Macchiavelli to Robert Greene have given advice for manipulating others to achieve your own ends using means that are often quite similar to the ones Simler and Hanson describe. For example, in The 48 Laws of Power, Greene describes tactics such as pretending to be a friend in order to spy on others (in other words, using a pretext) and saying little in order to remain ambiguous (in other words, exercising discretion). Taming the elephant: If we’re aware of these strategies, we can choose to behave more honestly (by following norms or by openly breaking them)—or to improve our deceptions (for example, by implementing Greene’s laws of power.)

Simler and Hanson say that, in order to help us deceive ourselves as well as others, the human brain is made up of a number of self-contained modules, meaning that we can actually hide information (including our true motives) from ourselves. They argue that the brain has a “press secretary” module that’s in charge of explaining our actions to the outside world—and to ourselves.

Like its real-life counterpart, our internal press secretary’s job is to put the best possible spin on whatever we do. Likewise, our internal press secretary tends not to lie outright, but rather to tell selective truths while ignoring less attractive aspects of our behavior. For example, a politician might say he got into politics to serve the public good, which might be true. But what he’d never admit to others—and possibly to himself—is that power and prestige also attracted him to public office. Simler and Hanson argue that this internal spin doctoring is so ingrained that we constantly fool ourselves. They point to studies showing that if we’re tricked into an action or decision we didn’t mean to take—and if we don’t notice the deception—we’ll explain and defend “our” choice without noticing anything wrong. 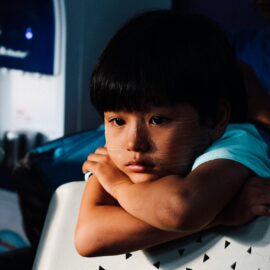 Types of Child Abuse in A Child Called ‘It’