Looking for The Road to Character quotes from David Brooks? What are some of the most noteworthy passages worth revisiting?

In his book The Road to Character, David Brooks discusses the fact that modern society is more focused on “me” rather than “we.” He spends much of the book highlighting examples of famous historical figures that were able to make a difference because they focused on others more than themselves.

Below are some noteworthy quotes from the book.

Quotes From The Road to Character

New York Times columnist David Brooks believes that modern society has lost its moral compass, and our lives will feel empty until we find it again. In The Road to Character, he asserts that in the last 70 years—beginning soon after World War II’s end—our culture has undergone a huge moral shift toward narcissism.

Here are some The Road to Character quotes with explanations:

“Humility is the awareness that there’s a lot you don’t know and that a lot of what you think you know is distorted or wrong.”

According to Brooks, humility is key to overcoming any human weakness. Own up to your flaws and imperfections—stop telling yourself you’re fine as you are. You can’t become a better person unless you are willing to humble yourself and learn. You must accurately assess your own flaws, and you must submit to the idea that you are not and will never be perfect.

Novelist George Eliot (pen name for Mary Anne Evans) learned to be a better person by opening herself up to selfless love. Her decades-long relationship with partner George Lewes changed her from someone who was childlike, self-indulgent, and needy to a mature adult who was able to do the difficult work of writing soul-searching fiction. She paid a huge price for her relationship—Lewes was technically still married to another woman, so the pair were ousted from polite society—but that sacrifice helped her define her sense of morality and take agency for her own life.

Takeaways: Love has redemptive power, and loving fully and being fully loved increases your ability to be your best self. Also, it’s important to define your own moral code even if it defies society’s conventions.

Founder of the newspaper The Catholic Worker and advocate for the downtrodden during the Depression-era, Day became a better person by admitting her flaws. In her younger years, she suffered from depression and alcoholism, but she used the Christian concept of grace to turn her life of sadness into a life of service. Through deep devotion to her religion, she learned to embrace her own suffering and let it guide and strengthen her character. Her personal struggles became a force for good.

Takeaways: To find salvation, devote yourself to a cause that gives meaning and purpose to your life and learn to find the value in your own mistakes and flaws.

“The social media maven spends his or her time creating a self-caricature, a much happier and more photogenic version of real life. People subtly start comparing themselves to other people’s highlight reels,”

Today we’re obsessed with personal success and individual achievements. We believe that the length of our resumés is the ultimate measure of our worth. We think that a successful career, fame, and a fat bank account equal a fulfilling life. We broadcast our tiniest personal victories on Facebook and Instagram while we cover up, ignore, or even lie about our character flaws. We’re so busy achieving—and telling our friends what we’ve achieved—that we don’t waste a single moment wondering if there’s any higher purpose for our lives. 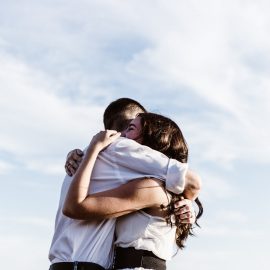 Love Is Not About Possession, It’s About Appreciation

How to Make Peace With the Death of a Loved One