Why did Randy Pausch give The Last Lecture speech? How did Pausch’s childhood influence who he became later in life?

To Randy Pausch, The Last Lecture speech was something he could leave his children, a way to say goodbye to his university colleagues, and a chance to cement his legacy and do a last bit of good. Pausch wanted to give back to the world before he passed away, it was something his father taught him to do since childhood.

Keep reading to learn more about the background of The Last Lecture speech.

When Pausch is invited to give a “Last Lecture,” the series has been renamed “Journeys,” and speakers are to talk about their “personal and professional journeys.” When he accepts the invitation months in advance, he’s optimistic about his prognosis. However, when it comes time to provide the title and an abstract, he wonders whether working on The Last Lecture speech is the best use of the time he has left.

His wife, Jai (pronounced Jay), wants him to spend his time with the family rather than on preparing The Last Lecture speech. Plus, he’ll have to travel to Pittsburgh from the family’s new home in Virginia the day before the lecture, which is Jai’s birthday—the last she’ll be able to celebrate with her husband.

But the idea of The Last Lecture speech lingers as something he could leave his children, a way to say goodbye to his university colleagues, and a chance to cement his legacy and do a last bit of good. He tells Jai, “An injured lion still wants to roar.”

They decide to go ahead with it. The talk will be about living rather than dying and will focus on an aspect of his life that he feels makes him unique—he’s managed to fulfill every one of his seemingly outlandish childhood dreams. He wants the lecture to encourage others to pursue their dreams. Hence the title, “Really Achieving Your Childhood Dreams.”

He puts together over 300 images, including many photos from his childhood, to help tell his story and continues editing them up to the last minute.

Pausch’s lecture draws a capacity crowd. He starts by displaying images of CT scans showing his tumors, and a photo of his new home in Virginia, where his family has moved so his wife and children can be near her friends and family after he dies. He does several pushups on stage to demonstrate the irony of looking good outwardly while his cancer rages internally. With the “backstory” of his terminal illness out of the way, he proceeds to talk about living.

Pausch and his older sister grew up in a middle-class community in Columbia, Maryland (suburban Baltimore), the children of an English teacher and an auto insurance salesman. He credited his positive childhood for the fact that he went on to achieve his dreams and live a fulfilling life.

His parents taught him old-school values of humility, hard work, initiative, the joy of learning, and meeting high expectations. They were extremely frugal—the family rarely went out for dinner or movies. Instead, they urged their children to read books. The children frequently consulted the dictionary during dinner when a question came up in a discussion. Whenever he wanted to know something, Pausch’s parents told him to look it up in the dictionary or encyclopedia.

His father liked to tell stories, especially with a moral. Pausch credits his father for much of the wisdom he quotes in his The Last Lecture speech. His father had been a medic in World War II, serving in the Battle of the Bulge.

Pausch was naturally cocky, but his mother kept him humble thoughout his life. She was sparing with her praise, once describing him to a friend as “alert, but not terribly precocious.” Later in life, when he complained about a difficult test he had to take as a Ph.D. student, she reminded him that his father had been fighting the Germans at that age. After he got his Ph.D., she liked to introduce him as a doctor, “but not the kind who helps people.”

Learning to Give Back

His parents were also service-minded. His father founded a nonprofit group to help immigrant children learn English. Another project was funding a girls’ dormitory in Thailand, intended to keep them in school and out of prostitution.

Even his father’s job of selling auto insurance in inner-city Baltimore was geared toward helping others—he helped poor people with bad credit to get the vehicles they needed to survive. He was a huge advocate for social equality. At age 83, when Pausch’s father was diagnosed with leukemia, he arranged to donate his body to science and to fund the Thailand dormitory for six years after his death.

The Importance of Creativity

One of the biggest ways Pausch’s parents impacted him was by encouraging his imagination. For example, they allowed Pausch and his sister to paint his childhood room. Among other things, he painted a quadratic equation, an elevator (the house actually had just one floor), a periscope, a Pandora’s box, a rocket ship, and chess pieces. On the ceiling, he wrote, “I’m trapped in the attic,” backward so it looked as though it had been written by someone imprisoned upstairs. He also wrote on the wall, “Disco sucks” (it was the ‘70s), but his mother painted over the last word.

His parents kept the room as he’d painted it, long after he moved out. Visiting it later reminded Pausch of how special his parents were for recognizing and encouraging his creativity. 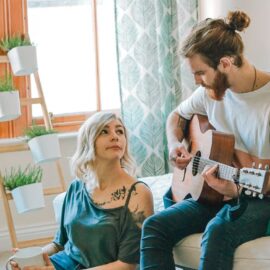 How to Define an Identity Crisis and Make it Work