What are sustaining innovations? How does sustaining technology help existing companies?

Read on to understanding sustaining innovations.

What Are Sustaining Innovations?

Sustaining innovations simply improve upon the performance of the industry’s existing products, thus catering to the established market. This represents the majority of technological advancements in any industry. Most companies that produce goods follow a fairly consistent trajectory of improving their products: They adopt technological advancements as they become available, and they release updated versions of their products with the new improvements. These updates are sustaining innovation examples.

When a technology is first developed, progress is slow and the slope of the S-curve is gradual. Then, the slope steepens as improved understanding and engineering bring rapid progress. Finally, the slope nearly plateaus as technology has been improved and refined so much that progress slows significantly.

Based on customer input, established firms’ marketing teams not only discourage executives from pursuing disruptive technologies, but they also push for increased effort on sustaining technology to improve existing products.

In the early 1980s, Quantum Corporation was a dominant manufacturer of 8-inch disk drives, which were used in minicomputers. When 5.25-inch drives disrupted the market, the company was nearly four years late to market its own 5.25-inch product.

When Quantum employees saw the next disruption coming, they didn’t want to be behind the curve yet again. The employees left Quantum and formed their own startup to make and sell 3.5-inch drives.

Quantum saw an opportunity: Instead of merely letting the employees walk away, Quantum financed and held 80 percent ownership of the startup, called Plus Development Corporation.

Besides the financial ties, Plus Development was completely independent—from its locations to its executives. The firm had a lot of success, which was a lifesaver to Quantum as the sales of its 8-inch and 5.25-inch drives dissipated over time.

After several years, Quantum bought out Plus Development and basically turned the startup into its main operation. As time went on, Quantum successfully adopted subsequent sustaining technologies and, by 1994, was the largest unit-volume disk drive manufacturer in the world. 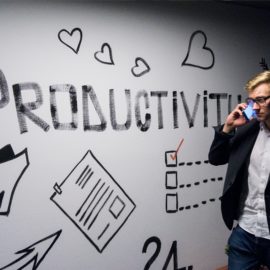 How to Create a Promotion Plan: Template + Strategies