In Sapiens, Yuval Noah Harari uses concepts from physics, chemistry, biology, and history to tell the story of us, Homo sapiens history.

In this brief history of Homo sapiens, we’ll look at each revolution and how it dramatically redirected the course of the history of Sapiens.

One reason the language of Sapiens was different was that it was more complex. Rather than communicating simple ideas the way green monkeys do (“Careful! A lion!” or “Careful! An eagle!”), the language of Sapiens could warn someone about a lion, describe its location, and plan how to deal with it. This allowed them to plan and follow through on complex actions like avoiding predators and working together to trap prey.

A second distinction of the Sapiens language was its ability to convey gossip. We think of gossip as a bad thing, but using language to convey information about other people is a way to build trust. Trust is critical for social cooperation, and cooperation gives you an advantage in the struggle to survive and pass on your genes. Sapiens could form groups of up to 150 people. They didn’t need to know every group member personally to trust them. In a battle, a small group of Neanderthals was no match for a group of 150 Sapiens.

A third benefit of the Sapiens’ language was how it was used to create fictions, also known as “social constructs” or “imagined realities.”

Collective fictions allowed early Sapiens to cooperate within extremely large groups of people, most of whom they’d never met, and it rapidly changed their social behavior.

The next major stage in Homo sapiens history was the Agricultural Revolution. About 10,000 years ago, between 9500 and 8500 BC, Sapiens started shifting from forager lifestyles to a life revolving around agriculture. This was the Agricultural Revolution. It was so successful for our species that we went from 5-8 million foragers in 10,000 BC to 250 million farmers by the first century AD.

The move from foraging to agriculture wasn’t necessarily a conscious choice. Rather, it was a gradual process of small, seemingly insignificant changes. Let’s see how those small changes add up to a monumental revolution.

The Spread of Wheat

18,000 years ago, the last ice age retreated, increasing rainfall. This was great for wheat and other grains, which started to spread. Because there was more wheat, people started eating more of it, taking it back to their campsites to grind and cook. On the way to the campsite, some of the small grains were sprinkled along the path, helping the spread of wheat. Wheat played a huge role in the history of Sapiens.

Humans burned the forests to create clearings that attracted animals. This also cleared the area of large trees and bushes that would have competed with the wheat for sunlight and water. Where wheat prospered, nomads would settle for a few weeks, enjoying the plenty. A few weeks turned into a few more, and over generations, these areas became permanent settlements.

People started storing grain for later and invented stone scythes, pestles, and mortars. Because they saw that wheat grew better when it was buried deep in the soil rather than sprinkled on top, humans began to hoe and plow the fields. Weeding, watering, and fertilizing followed. With all this time spent on tending the wheat, there was less time to hunt and gather. Sapiens had become farmers.

The move toward farming wasn’t an obvious benefit, since it led to a number of drawbacks.

Most of the surplus went to the elite, and they probably did live better lives than their ancestors. But the Agricultural Revolution didn’t immediately translate to a better life for most individuals.

Next in Homo sapiens history was the Scientific Revolution. In the last 500 years, we’ve seen unprecedented scientific and technological growth, so much so that a time traveler from 1500 would recognize very little of our world. For instance, since 1500, the world population has grown from 500 million Sapiens to 7 billion. Every word and number in every book in every medieval library could be easily stored on a modern computer. Further, we’ve built skyscrapers, circumnavigated the earth, and landed on the moon. We’ve discovered the existence of bacteria and can now cure most diseases caused by it, even engineer bacteria for use in medicines. All of these advances were made possible by the Scientific Revolution.

In many ways, the Scientific Revolution was the result of a shift in the way Sapiens viewed the world and its future.

We post-Scientific Revolution Sapiens understand the world differently than our ancestors:

1. We are willing to acknowledge our ignorance: Today, we assume there are gaps in our knowledge, and we even question what we think we know. This wasn’t the norm before the Scientific Revolution.

2. We emphasize observation and mathematics: Rather than getting our knowledge from divine books, we use our senses and the technologies available to us to make observations. We then use mathematics to connect these observations and make them into a coherent theory.

3. We strive for new powers: Knowledge is only valuable in its use to us. We don’t develop theories for the sake of knowing more. We use theories to gain new powers — in particular, new technologies.

4. We believe in progress, whereas our ancestors believed that the golden age was behind them.

Judging Findings by Their Usefulness

In the late 16th century, Francis Bacon made the connection between scientific research and the production of technology, but the relationship didn’t become really strong until the 19th century. Bacon saw that assessing how “true” knowledge is isn’t a good yardstick because we can’t assume that any theory is 100% correct. A better yardstick is how useful that knowledge is.

War has developed both science and technology. By WWI, governments depended on scientists to develop advanced aircraft, efficient machine guns, submarines, and poison gases. During WWII, the Germans held on for so long because they believed their scientists were on the verge of developing the V-2 rocket and jet-powered aircraft, weapons that may have turned the tide of the war. Meanwhile, Americans ended the war with a piece of new technology, the atomic bomb.

Our views on the value of technology have strayed so far from those of our ancestors that we now turn to technology to solve our global conflicts. The US Department of Defense is currently investing research money on bionic spy-flies that stealthily track the movements of enemies and fMRI scanners that can read hateful thoughts.

The Industrial Revolution would forever change Homo sapiens history. Economic growth requires more than just trust in the future and the willingness of employers to reinvest their capital. It needs resources, the energy and raw materials that go into production. While the economy can grow, our resources remain finite.

At least, that’s what we’ve thought for centuries. But the energy and raw materials that are accessible to us today have increased as a result of the Industrial Revolution. We now have both better ways of exploiting our resources and resources that didn’t exist in the worlds of our ancestors. This fundamentally altered the history of Sapiens.

The Discovery of Energy Conversion

Our ancestors were limited in how they could harness and convert energy.

First, they had limited resources. Before the Industrial Revolution, humans burned wood and used wind and water power for energy. But if you didn’t live by a river, if you ran out of trees in your area, or if the wind wasn’t blowing, you were out of luck. The ways people could access energy were limited.

Second, there was no way to convert one type of energy into another. For example, they couldn’t harness the wind and then turn that energy into heat to smelt iron.

The discovery of gunpowder introduced the idea that you could convert heat energy to movement, but this was such an odd concept that it took 600 years for gunpowder to be used widely in artillery.

Another 300 years passed before the invention of the steam engine, which used also converted heat to movement, through the pressure of steam. After this, the idea of turning one type of energy into another didn’t seem so foreign. People became obsessed with discovering new ways to harness energy. For example, when physicists realized that the atom stores a lot of energy, they quickly devised ways to release it to make electricity (and bombs). The internal combustion engine turned petroleum, previously used to waterproof roofs and lubricate axles, into a liquid that nations fought wars over. Electricity went from being a cheap magic trick to something we use everyday and can’t imagine living without.

For most of Homo sapiens history, goods were scarce. People lived frugally, and frugality was a virtue. In an odd twist, today, we have too much stuff. Rather than supply not meeting demand, demand didn’t always meet the supply. We needed buyers.

This prompted the new ethic of consumerism. Frugality became a bad word, and people were taught by industries that consuming was a positive thing. Self-indulgence is “self-care” and frugality is “self-oppression.”

Consumerism has changed our values, habits, and health. 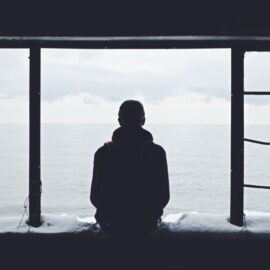