What are the dangers of Roundup Weed Killer? Is Roundup dangerous to use?

Agriculture uses many products to increase crop yield. Roundup weed killer is commonly used on products, but may expose you to dangerous chemicals.

See what the dangers of Roundup Weed Killer are and if it is safe for humans.

The Dangers of Roundup Weed Killer

The common weed killer Roundup is widely used on crops that we eat and that become animal feed, so we’re constantly exposed to its chemicals and their harmful health effects.

Additionally, there are other dangers of Roundup Weed Killer:

Is Roundup dangerous to use? Yes and you can avoid using it. If you use Roundup and other weedkillers in your own garden, instead mix a cup of salt, a gallon of white vinegar, and a tablespoon of liquid dish soap and spray on weeds. You can also substitute Epsom salt for the salt and lemon juice for the white vinegar.

With the rise of Roundup, farmers needed crops that could withstand the powerful weed killer. But there are many dangers of Roundup Weed Killer.

Genetically modified (GMO) foods were created by injecting plants with foreign genes to make the plant more resistant to insects (by producing more lectins) and more resistant to Roundup, so that farmers could easily spray a whole field with Roundup and the crops would be unharmed.

However, farmers also commonly spray non-GMO crops with Roundup as a desiccant, in order to dry them out and make them easier to harvest—and the chemicals are never removed from the plants at any point between the field and your dinner table.

The Roundup-sprayed crops either end up in your grocery store or in corn and grain feed for livestock, meaning you’re ingesting Roundup from both GMO and non-GMO crops as well as the milk and meat you consume.

In addition, besides producing higher amounts of lectins to ward off insects, GMO plants produce new proteins that your body isn’t familiar with, so your immune system doesn’t know how to read the barcodes and attacks, causing inflammation. 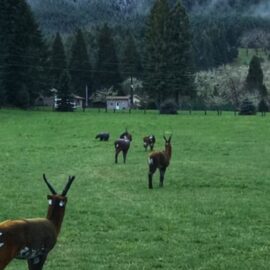