Are you looking for some quotes from The 10X Rule? Can 10X quotes help motivate you in your pursuit of extraordinary success?

The 10X Rule shows you how it’s possible to get to big results with the right approach. These 10X quotes will help you remember the key messages and stay motivated.

Read on for 5 Grant Cardone quotes from The 10X Rule.

“I suggest that you become obsessed about the things you want; otherwise, you are going to spend a lifetime being obsessed with making up excuses as to why you didn’t get the life you wanted.”

The first of the Grant Cardone quotes from The 10X Rule is about where people go wrong. Everyone uses excuses—we all have favorites we use repeatedly. Many people reading this book are making excuses at this point for not adopting the 10X Rule.

Excuses are reasons you come up with justifying what you do or don’t do. Popular excuses include:

But excuses aren’t the real reasons motivating what you do; they’re a rewrite of the facts to make you feel better later. For example, you might blame traffic for making you late to work. But the real reason you’re late is not planning your time so you can leave home earlier and avoid traffic.

You can’t create change or improve any situation until you acknowledge the real reason for your actions or inactions. When you make excuses you’re refusing to take responsibility for your life.

No excuse will ever make you more successful. In fact, when you excuse something you did or didn’t do, you create an opportunity for someone else to find a solution instead of you.

If you believe success is your duty rather than an option, you must commit yourself and your business to never making excuses for anything.

“Weak and overwhelmed individuals respond to others’ success by attacking it.”

This is one of the 10X quotes that ask you to rethink what success is. People sometimes think of success as being in limited supply—that someone else’s success somehow limits theirs. Or perhaps one person’s achievement makes a less successful person feel inadequate, so they think of success as available only to a few.

Successful people like Buffett understand that you create success rather than acquire it. And there’s no limit on the success ingredients of ideas, creativity, talent, intelligence, and persistence. You and millions of others can create as much success as you’re capable of, anywhere at any time.

Others’ achievements affirm that success is possible for everyone. That’s why we’re inspired by extraordinary performances by athletes and musicians. Don’t begrudge anyone their success—let it motivate you to let go of limiting thoughts and create more success.

“Success tends to bless those who are most committed to giving it the most attention.”

Nearly everyone is pursuing the “holy grail” of success. But while we all want to succeed, this is one of the 10X quotes that says most people fall short. In The 10X Rule, entrepreneur and motivational speaker Grant Cardone argues that people don’t succeed because:

1) They misunderstand what it takes to be successful. People often mistakenly think success is a matter of having money, connections, talent, the right education, the right personality, getting lucky breaks, being in the right business or industry, or being in the right place at the right time. But these don’t guarantee success.

Only the 10X Rule—setting extreme goals and taking extreme action to meet them—guarantees success and, unlike the above criteria, it’s available to everyone.

Cardone himself fell into this trap. He has achieved success by many measures: as a best-selling author, a popular motivational speaker, investor, and entrepreneur (his companies have annual revenue of over $100 million). However, he writes that his biggest regret is that he wasted time by not setting extraordinary goals personally and professionally, right from the beginning of his working life.

Second, people fail to reach their goals because they underestimate what it will take to reach them and don’t apply enough effort. Again, this is average thinking—they assume that by putting in a “reasonable” amount of effort they’ll succeed.

“Extremely successful people know that their efforts must continue in order for them to realize new achievements. Once the hunt for a desired object or goal is abandoned, the cycle of success comes to an end.”

According to one of the Grant Cardone quotes from The 10X Rule, being successful isn’t a one-time achievement; it’s something you create over time.

In the Middle Ages, it meant rising or “succeeding” to the throne but also keeping it. Rather than being just one event or achievement, success is ongoing—you have to build on it in order to maintain it. For example, your diet isn’t a success if you lose 10 pounds but gain 12 more. You can mow your lawn once and it will look great for a week, but you can’t consider your lawn a true success unless you maintain it.

Once you accomplish something, you must build on your success in order to sustain it.

Further, success is forward-looking. It’s like breathing: your last breath isn’t as important as your next one. You can’t live the rest of your life on the last breath you took.

Each success builds momentum for the next. Highly successful people are driven to keep creating more success because to be happy, they need to live up to their potential. Being dissatisfied and wanting more success is a positive rather than a negative. For example, most people would want to increase the love they feel for their family each day, rather than being satisfied with the love and connection they felt yesterday.

Focus on creating the kind of success that builds on itself.

“Realistic thinking is based on what others think is possible—but they are not you and have no way of knowing your potential and purposes.”

People often set goals they never get started on or soon quit on. While it may seem counterintuitive, the major reason for failure is that they don’t set their goals high enough.

Instead of following their dreams, they set average goals based on what others think is possible. Others encourage us to be realistic and avoid setting goals that are too high, so we limit ourselves to doing what others do—for instance, going to college, practicing the religion and speaking only the language we grew up with.

This is a recipe for failure because these goals aren’t motivating, so you don’t reach for them or achieve them. You can’t get excited about working toward realistic goals with an average payoff. So you put in average effort, if any. If you encounter obstacles, you quit because your goals aren’t worth the additional effort of overcoming obstacles. Goals need to be big to inspire you and hold your attention. However, many people’s goals are so unremarkable that they write them down only once a year and then forget them.

If you’re inclined to follow someone else’s lead, base your goals on exceeding those of successful people. Better yet, set your own big, unrealistic 10X goals. Start by reminding yourself of the following:

The 10X Rule is for those who aren’t satisfied with average and who are determined to create an exceptional life.

The Innovator’s Dilemma by Clayton Christensen 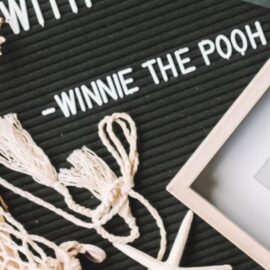