What is disgust? How is disgust closely related to divinity? What is the opposite of disgust?

Our sense of disgust was probably an advantage in natural selection, as it would have prevented us from coming into contact with things that were harmful to us. Aversion to disgust is ingrained in us so deeply that we try to separate ourselves from actions we deem unclean in order to reach divinity.

Keep reading to learn more about the logic of disgust and how it relates to religion.

The Logic of Disgust

Many ancient religious texts are concerned with purity and cleanliness (i.e., rules about handling corpses, not eating certain kinds of meat, ablution rituals). There seems to be an ancient sensitivity to the emotion of disgust. But what is disgust?

As has been the case with so many of the ancient writers and thinkers we’ve surveyed, this preoccupation with disgust actually reflects deep insight into human psychology and evolution. Our sense of disgust was probably an advantage in natural selection, as it would have prevented us from coming into contact with decayed or poisoned things that were harmful to us.

This is seen in ancient proscriptions against the eating of animals that come into contact with corpses, excrement, and garbage; as well as the transmission of human bodily fluids, which the ancients knew could cause illness, even millennia before our modern germ theory of disease.

This logic of disgust extended into the realms of sexual norms and body appearance. There seems to be a hard-wired idea, universal across cultures, that one must treat one’s body as a temple and never defile it with impure or corrupt foreign externals.

Separating the Disgusting From the Divine

On the horizontal X-axis, we have the world of connection and relationships; here, we make distinctions between strangers and friends, known and unknown. On the Y-axis, we have the world of hierarchy; those we perceive as being our social superiors or inferiors. But there seems to be a third dimension, a Z-axis. This is what we might call divinity; a sense of uplifting when we witness something extraordinary or beautiful. It is its own unique moral dimension.

This notion of cleanliness connects us to the divine, elevating us above the animals (who, after all, perform the same crude biological functions we do). Our disgust at impurity and our desire to conceal or sanitize many aspects of our animal behavior, whether it is the elimination of waste or the act of mating, is one way that we travel along the divine Z-axis.

Hindu teaching even mandates that recitation or study of the holy scriptures like the Bhagavad Gita should never be done during eating or elimination, ensuring that the spark of divinity within each individual is always separate from the baser functions of our biology.

The Body Is a Temple

These notions go far beyond mere tools of hygiene or social control (as a non-believer might be tempted to think). They speak to something much more profound and universal. To fail to treat one’s body as a temple is to degrade and diminish the godliness within oneself. This leads to bad karma and reincarnation as a baser animal in the next life.

These rules separate the disgusting from the divine. It is hardly a coincidence that all religious traditions have designated times and spaces for religious observance, a way of walling off the worldly from the otherworldly.

Even secular people and cultures retain some vestiges of this. We have a special psychological reverence for certain times (like anniversaries) and spaces (such as those where significant life events took place, like one’s childhood home) that have no immediate religious connection. We also touch divinity through secular experiences like seeing natural beauty or appreciating great art.

Even taking some hallucinogenic drugs like LSD or psilocybin (“magic mushrooms”) can bring about these feelings of transcendence. It is no coincidence that many religious traditions make the ingestion of psychoactive plants a key part of initiation into the spiritual community.

Elevation: The Opposite of Disgust

If disgust and the desire to separate our bodies from the divine represent a “downward” movement along the Z-axis, what about the opposite?

We feel a very unique but difficult-to-describe set of emotions and physical sensations when we witness someone doing a good deed, often accompanied by a desire to follow suit and do good deeds of our own. This is when people move “up” along the Z-Axis, moving closer to the divine. This is elevation, an emotion that we might think of as the opposite of disgust.

Elevation is best described as the feeling you get when you are:

It is a calming feeling, possibly activated by the vagus nerve, which controls the heart rate. Notably, studies have shown that people point to their chests when asked to describe their physical sensations during elevation. This same nerve also produces oxytocin, the hormone that encourages bonding and attachment in mothers and triggers milk production. One study showed that women were more likely to lactate and engage in warm and nurturing behaviors with their babies after watching an elevating video.
The feeling of experiencing God’s love as part of a congregation is a common manifestation of elevation. It’s why religion is found in every culture at every time across the world; it fulfills a basic human need to connect with something greater. Religion powerfully enriches our self-narratives by placing us within a larger cosmic story.

The Social Introvert and How They Form Relationships 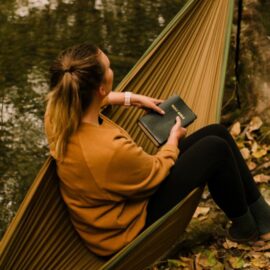 What to Do If You Have No Purpose in Life