What are the traits of humans and how do we see them reflected in our body design? How did our bodies form?

The traits of humans are easily identifiable down to the molecular level. But how did these traits form, and why?

Read more about the traits of humans and how they developed over time.

Cells have mechanisms for communicating, sticking together to create specific materials like bone, and trading proteins. Without these abilities, cells couldn’t build bodies. These mechanisms predated the various body plans and patterns we can trace back through DNA and fossils.

They raise key questions about bodies beyond their design:

This chapter explores these questions by tracing the development of bones, examining simple bodies such as sponges, and looking at life forms without bodies—all of which provide clues to the construction of human bodies and explains the traits of humans.

What Is a Body? Top Traits of Humans

Not every clump of cells or bacteria working together constitutes a body and defines the traits of humans. Bodies have several defining characteristics:

But our complex bodies stretch back to a point in time where single-celled organisms became primitive bodies by developing mechanisms for cells to attach together, communicate, and make things like molecules.

When Did Bodies Appear?

Bodies with advanced features like hands and sense organs haven’t been around all that long. Life consisted of single-celled organisms for much of Earth’s 4.5-billion-year history. If that history were compressed into a calendar year, single-celled organisms (like algae and bacteria) would be the only life until June. Animals with heads would show up in October and the first human would appear on December 31. But knowing about our ancestors helps explain human genetic traits.

Rocks illustrate this immense time scale: those older than 600 million years show evidence only of colonies of algae, which are far from being bodies. In the 1920s and ‘30s, paleontologists found evidence of possibly the earliest bodies but didn’t realize what they were. The impressions looked like disks and plates—they may have been primitive algae or jellyfish.

Scientists found more impressions of disks, ribbons, and fronds in Australia in 1947. But they didn’t understand until the 1960s, when the rocks were accurately dated, that the impressions were of some of the earliest bodies. Some resembled today’s simple sponges and jellyfish; others were unlike anything that existed. But this can help explain human traits.

So multicellular creatures lived in the seas 600 million years ago. Some bodies had symmetrical patterns or specialized structures that, for instance, gave them the ability to move. The rocks showed evidence of scrapes or paths of movement.

How Did Bodies Come About?

To explain how bodies came about, we’ll look first at how cells combine to form tissues in the body and how this contributes to traits of humans.

Although these early Precambrian creatures look nothing like humans, they were made of the same type of “glue” (collagen and proteoglycan) that allows human body cells to stick together to build materials and organs. In our bodies, this glue is a mix of molecules that differs depending on the organ it’s forming—for instance, a bone versus an eye. Without the molecule mix attaching cells to each other, bodies couldn’t be formed.

Bones are an example of how the molecular glue works. Bones, like bridges made of steel or cables, get their strength from their components, which are designed to withstand force but also be somewhat flexible. The balance of strength and flexibility, as well as proportions, of the skeleton allows the bodies of humans, frogs, rabbits, and horses to run and jump in specialized ways.

The properties and molecular structure of the materials, which hold bone tissues together, are also important.

Examining bones by microscope shows how they’re structured. Some cells fit closely together while others have space between them. The space between cells contains minerals such as hydroxyapatite (also in teeth), which acts like concrete—strong when compressed but less so when twisted. The space also contains collagen molecules, ropelike bundles of fibers that are strong like rope when pulled. (Collagen is our body’s most common protein.)

Another skeleton tissue, cartilage, cushions bones that move against each other. It’s a softer, more flexible material that bends under pressure but springs back into shape. Cartilage has space between its cells, which are filled by collagen and a molecule called a proteoglycan complex that absorbs water to help cartilage pad joints.

The amounts of the different materials make bones, cartilage, and teeth different.

Skeletons, whether in humans or animals, function as designed when these molecules are distributed in the proper proportions.

Like humans and animals, the earliest creatures with bodies—even those that lacked skeletons or were only clumps of cells—had molecules or collagen and proteoglycans between cells. This means primitive creatures had to find ways to: make these materials, further glue cells together, and enable cells to communicate.

How Cells Stick Together

Bodies use different methods of connecting cells. Bone cells stick together by using various types of molecular rivets. Some work like contact cement, gluing the outsides of two cells together. Other rivets connect only to cells with the same kind of rivet, a mechanism that enables cells to organize and ensures that bone cells stick to bone cells, skin cells stick to skin cells, and so on.

In the lab, cells put in a dish will sort and organize themselves according to the numbers and types of rivets they have.

To make the pattern of our skeleton and the rest of the body in the traits of humans, cells must communicate so they know when to divide, make molecules, and die. If they acted randomly—for instance, making the wrong amounts or type of bone or skin, we would die.

Cells communicate by sending out molecules with messages. A cell sends a signal or molecule, which attaches to the outside of a receiving cell. This sets off a chain reaction of molecules within the cell moving the message from the outer membrane to the nucleus. As a result, the cell receiving the information changes its behavior: it divides, makes new molecules, or dies. This is one of the most important human genetic traits.

In summary, all animals with bodies have molecules like collagen and proteoglycans between cells; the molecules have rivets so they can stick together and their cells communicate by sending molecules back and forth. This is how cells create body structures like the skeleton and is one of the most important human genetic traits. 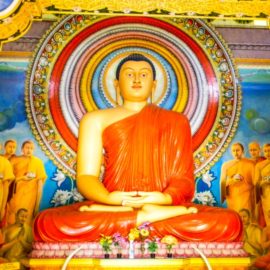