What is modern individualism? How does this play into the idea of antifragility?

Read more about modern individualism and antifragility below.

Evolution: When Antifragility Benefits Others

In the case of the species, it’s the genetic information that is preserved and strengthened as individuals die; the biologist Robert Trivers explored this conflict between individuals and genetics with his concept of the “selfish gene.”

To see the necessity of evolution, which is fueled by danger and unpredictability, consider a hypothetical organism that doesn’t reproduce and never ages. Sooner or later, it would be bound to encounter a situation—perhaps a predator, an accident, or a disease—that it’s not prepared for. Unless this organism could somehow predict the future with perfect accuracy, or was prepared for literally any possibility, something would eventually kill it and that would be the end. There would be no chance for antifragility.

However, if we consider an organism’s genetic information rather than the organism itself, we can see antifragility at work. Organisms that aren’t well suited to their environment will die out, while the ones that are suited to it will survive and pass on their genes. Therefore, the population as a whole will become stronger.

(Shortform note: To further explore the ideas of selfish genes, read our summary of Richard Dawkins’s book The Selfish Gene; Trivers wrote the original foreword for that book.)

These concepts also extend beyond biology. For example, a town known for its great restaurants could only get to that point if the mediocre restaurants went out of business. Environmental stress—in this case, in the form of competition—is necessary to keep the local restaurant scene strong.

Therefore, while many entrepreneurs and small business owners will see their businesses fail (possibly at great cost to themselves), we should admire them for taking the risk and thank them for making the economy as a whole stronger by their failure. Whether organisms or businesses, the core concept of evolution is that individuals die, and as a result the “species” becomes more fit for the environment. Therefore, evolution is a sort of higher-level antifragility; rather than helping the individual facing the challenge, it helps the population as a whole.

When Helping Individuals Harms the Group

This chapter started with the point that antifragility at a higher level depends on fragility at a lower level. Therefore, it stands to reason that the opposite is also true: Protecting the lower level from harm will weaken the system as a whole—or, more accurately, prevent it from getting stronger. Science has no way—yet—to prevent cells from dying and being replaced by stronger ones, or to make individual organisms immortal, but we can see this principle function in modern economics.

When a government bails out companies to protect them from their own mistakes or weaknesses, it drains resources from everyone else and stops other companies from learning from their competitors’ mishaps. For example, consider the enormous bank bailout that the U.S. Federal Reserve paid for in the late 2010s: An estimated $7.77 trillion went to artificially stabilize the economy, rather than allowing the banks to collapse and the economy to naturally strengthen itself by recovering from the shock.

In many ways, this struggle between the group and the individual is strictly a human phenomenon, and it’s fairly new even to us. In the past, mainly prior to the Enlightenment, individual people were practically irrelevant. Groups—kingdoms, churches, and so on—were all that mattered. If those groups ended up slaughtering huge numbers of individuals in wars, or witch trials, or what have you, then so be it.

People even considered families more important, by far, than the individual members of those families. It wasn’t unheard of for someone to wipe out his savings to clear the debt of a distant cousin, just to protect the family name. In fact, doing so was seen as a duty. This same lack of self-interest can be seen by soldiers who willingly march off to war to die for their country, or rioters who lose all fear of authority when caught up in the energy of the group.

While the modern focus on the individual’s security and happiness is, of course, helpful and healthy at the personal level, individuals can’t survive without the system that they live in. Therefore, valuing the individual too much—that is, at the expense of the system as a whole—will ultimately be harmful to everyone.

In the case of the restaurants that go out of business, thereby strengthening the local restaurant scene—or if the U.S. banks had been allowed to collapse as they should have—we can see a particular type of weakness: the kind that strengthens others. It doesn’t have to be companies that go out of business—imagine a person who watches someone else slip on the ice and fall, and so knows to be careful on that spot. That’s an example of this type of error. So is a plane crashing due to a systems failure, thereby providing valuable information about a weakness in the systems that the manufacturer can then (hopefully) correct.This is antifragility at work.

However, there’s another type of weakness, a systemic weakness where one point of fragility can bring down the entire system. This happens when, rather than letting a fragile individual die, the system tries to bring in more and more resources to protect it. Imagine if a prey animal were being attacked by a predator and, instead of simply letting it die, other prey animals tried to save it. They would likely be slaughtered, and the damage to the population would be much worse.

Therefore, to reiterate the key point, antifragility of a system or group depends on the fragility of its parts. 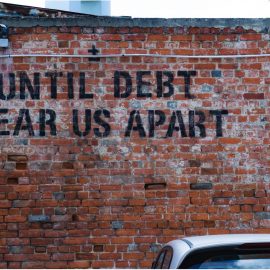 The National Debt Relief Lawsuit: Is the Plan Illegal?