What is microwave background radiation? What does cosmic radiation tell us about the universe?

The cosmic microwave background radiation (CMB) is thought to be the remnant radiation from the Big Bang origin of the universe. CMB is basically the evidence that the universe had a beginning, and that this beginning was marked by the Big Bang explosion.

Keep reading to learn about the discovery of the microwave background radiation.

What Is Microwave Background Radiation?

The Russian physicist and mathematician Alexander Friedmann took relativity to the next level. Based on his observations, he made two key assumptions based on his observations: 1) The universe looks identical no matter what direction we look; and 2) The universe would look identical from any direction, regardless of the position in space-time of the observer. If the universe was static and unchanging, such conditions would be highly unlikely—they suggest, instead, a dynamic universe.

Friedmann’s assumptions got a major boost in 1965, when Bell Labs astronomers Arno Penzias and Robert Wilson were conducting experiments with a microwave detector. They found that they were picking up more noise than their calculations predicted that they should—and that it was coming from an unknown source. This noise was the same regardless of where they aimed the detector or the Earth’s position. This could only mean that the sound wave radiation must be from beyond the galaxy.

This was strong support for Friedmann’s first assumption: if the noise was uniform regardless of the direction of the detector, the universe would have to be the same all around, at least on a large scale. This distinction is important—the noise is the same on average on a large scale, but small variations do exist on a smaller, more local scale.

If one starts with the assumption that the early universe must have been hot and dense, then some of the light from this time must be detectable, because it would only be reaching us now. These remnants of the early universe would be the most distant edges of the expanding universe.

But, because we now know that wavelengths become greater with distance and speed (and that this part of the universe must be the fastest-moving) the wavelength and frequency of this light would be greatly red-shifted: so much, in fact, that it wouldn’t appear to us as light at all. It would reach us as microwaves. (Microwave background radiation wavelengths are about a centimeter long, multiple orders of magnitude larger than light waves). This was the radiation detected by Penzias and Wilson. The noise they heard was the vibration from the Big Bang, the edge of the universe, the very beginning of time.

This was evidence that Friedmann (and Hubble and Olbers) were right—the universe is not static and unchanging. In fact, it’s expanding. 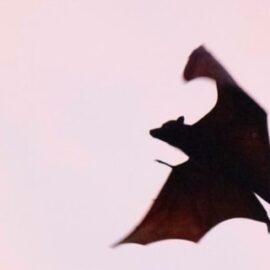