Meditation can take both active and inactive forms. In The Bhagavad Gita, Krishna explains to Arjuna how the different kinds of meditation can bring him closer to god.

Read more about the different kinds of meditation in The Bhagavad Gita.

Meditation likely brings to mind an image of someone sitting peacefully, legs folded, breathing slowly, and focusing inward. But there are different kinds of meditation. In Arjuna’s case, such inactive meditation isn’t currently suitable for Arjuna the warrior prince, who must protect and lead his people.

If the goal of meditation is peace and understanding, then the best place for Arjuna to start is with what Krishna has spoken of several times already: selfless action. Once he has achieved a level of self-realization through selfless action, he will be ready to seek inner peace and stillness through meditation.

Although it’s not yet time for Arjuna to meditate, Krishna gives him detailed instructions on how to do so when the time comes. He tells him to find a clean, comfortable spot, and to sit down on a cloth, a deerskin, and a patch of grass. He should sit perfectly straight, with his body, head, and neck all on the same line, and focus on something in front of him to keep his eyes (and attention) from wandering. This helps him understand the different kinds of meditation.

Once seated comfortably in this position, Arjuna should focus only on Vishnu. By turning every thought toward God, he’ll cleanse himself of attachment to sense-objects. This will be possible if he has let go of fear by understanding his true self, and let go of desire by dedicating his actions to Brahman.

Krishna warns that moderation in all things is key to successful meditation. Those who overindulge themselves will be bound by their desires; they won’t be able to meditate properly because they’ll be focused on themselves rather than God. Those who deny themselves everything—such as ascetic monks—won’t have the strength or focus to maintain their meditative states.

The end goal of meditation is nirvana, a state of perfect joy and peace where the person is united with Vishnu, even while still alive in both kinds of meditation. Someone who’s reached nirvana has unshakeable focus and perfect understanding of his Atman. Understanding that everyone and everything comes from the same divine sources, such people react to others’ joys and hardships as if they were their own, and have no concern for who is a friend or an enemy; indeed, someone who’s attained nirvana wouldn’t even be able to view someone else as an enemy.

Finally, Krishna says that—while selfless work is important and a crucial first step toward self-realization—meditation is the best way to escape karma and be united with him.

Different Types of Will

When thinking about the kinds of meditation it’s also important to learn about different types of will. During his discussion of meditation, Krishna also briefly discusses will. In doing so, he draws an important distinction between will and self-will. Self-will, called ahamkara, is the negative kind of will that one might find in a so-called “willful” child. This type of will is focused on desires and pleasures through sense-objects; in other words, it’s the force that drives people to get what they think they want.

Will, on the other hand, is what allows people to withdraw their senses, deny themselves the immediate pleasures of sense-objects, and find their true selves. This is what’s required to properly meditate and understand oneself. Will is the friend of the Atman, the true self; self-will is its enemy. Krishna urges Arjuna to use will to conquer and master himself, and to never let himself be dragged down by self-will.

How to Become a Dominant Alpha Male: Level Up Your Finances 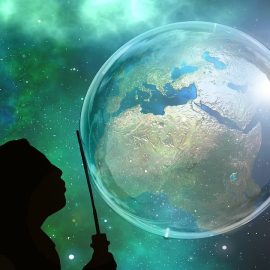 Live in the Real World: Sage Advice From the Stoics