Do you have trouble moving on when life doesn’t go the way you wanted to? Do you wonder how to deal with failure more effectively?

Failure will happen to each and every one of us in some form or another. When life throws curve balls at you, you may start to wonder about how to deal with failure—how to recover from it emotionally and put it behind you mentally.

Read about how to deal with failure and bounce back from it better than before.

How to Deal With Failure

At some point, you’ll run into difficult times, when things are not going well and it feels like life is on hold: dead time, when your efforts feel wasted and pointless, or when you’re suffering the consequences of bad decisions. This might be a period of unemployment, a stint laid up in the hospital—or maybe even prison.

Some people simply endure these times, waiting for them to pass before they get working on their lives again. Others, though, use this time productively, turning dead time into alive time and getting a head start on the rest of their lives.

If you want to learn how to deal with failure more effectively, you must be humble and willing to face parts of yourself that you don’t like. When you are humble, you are open to a truth—revealed by your challenges—that you already knew about yourself but were unwilling to admit. Low moments force you to ask yourself important questions, such as: How can I better understand this? How can I move past this? How can I prevent this from happening again?

Reflections such as these can point you in the right direction, but if your ego directs you toward denial instead, you’ll lose the opportunity to improve. People whose egos can’t admit, in a low moment, that their own deficiencies brought their troubles on them, are unable to learn from those troubles, grow, and prevent them from happening again.

If your ego is bruised by your circumstances and drives you to be defensive, belligerent, or in denial, your dead time will remain dead time. You’ll pass your days thinking idly about the future, plotting your revenge, or getting lost in distractions. When your dead time is up, you’ll have lost time to other people who’ve moved ahead with their lives.

There are many examples of people throughout history who’ve been laid up in some way and emerged from the experience stronger and more prepared for the world because they used that time wisely, instead of spending it feeling resentful and bitter. Malcolm X read widely and deeply while in prison and formed the beliefs that powered his later activism. Francis Scott Key wrote the lyrics to the United States’ national anthem while he was imprisoned on a ship during the War of 1812. And in a more recent—and famous—example, after Steve Jobs was fired from Apple in 1985 because of his unmanageable leadership (caused by his uncontrolled ego), he started a new company, Pixar, threw his whole energy behind it, and resolved to fix the personal flaws that had made him fail with Apple. He emerged a better leader and was able to return to Apple and save it when it needed help.

Redefine Success to Deal With Failure

Your ego wants other people to recognize your work in a positive way. In fact, sometimes your ego defines success based entirely on how much or how little others give you such recognition, through honors, praise, awards, job titles, raises, and so on. Unfortunately, if you let your ego define success for you in this way, you’re setting yourself up for disappointment, because you can’t control how the world receives, judges, or acts upon your work.

Life is going to be unfair—at some point, your work will go unnoticed, be credited to someone else, or be misinterpreted and unjustly challenged. If your ego takes over when the reception of your work falls short of your expectations, you’ll get upset.

Worse, if your ego fears a poor reaction, you may not go to the trouble of working on a project in the first place. Your ego asks, why bother? If you allow your ego to drive your decisions in this way, you’ll deny yourself the opportunity to turn things around when you experience failure.

If, instead, you view recognition, rewards, and rejections as peripheral elements of success, you’ll continue to work on your important projects for the sake of putting them out into the world, even when they’re ignored or poorly received, simply because you feel the world needs them. Because you can only control your own actions, you should evaluate success by judging those actions alone, regardless of how your audience receives them: Focus on efforts, not outcomes.

A tragic example of what happens when a person sees recognition as the true marker of success is the life—and death—of the author John Kennedy Toole. He was so heartbroken by his inability to find a publisher for his book A Confederacy of Dunces that he committed suicide. Later, his mother found the manuscript and had it published. The book went on to become a modern-day classic, earning Toole a posthumous Pulitzer Prize. Had he been happy with his work for its own merits, regardless of its reception, he would have eventually achieved the success he so desired after emerging from his publishing setbacks.

Love, Even When It’s Hard

When failure trips us up, our ego wants to hate someone for it. Hatred puts the blame for our suffering on someone else, allowing us to convince ourselves that we are victims of someone else’s incompetence or malfeasance. Unfortunately, while hatred may feel like a temporary emotional release, it does nothing to release us from our failures. On the contrary, hatred holds us to our failures longer.

The paradox of hatred is that it accomplishes the exact opposite of what we hope it will accomplish. While we may feel hatred is an appropriate response and will demonstrate how wrongly we’ve been treated, it more often makes our bad side public, which makes people lose sympathy for whatever wrong we’ve endured.

William Randolph Hearst, the wealthy and powerful media mogul of the early 20th century, provides an example of how hatred can backfire. In 1941, first-time director Orson Welles released “Citizen Kane,” the now-classic film based partly on the life of Hearst. Hearst decided the film was an intolerable insult and set about trying to shut it down, using his considerable influence to convince movie theaters not to show it, and forbidding any newspapers in his vast empire from even mentioning its name.

While he was able to initially stop the success of the movie, he couldn’t prevent the movie from becoming a canonical classic. Ironically, his actions ultimately helped the movie gain lasting fame through notoriety. Further, his anger and bitterness linked him inexorably to the film for all time; in truth, the movie was based on a combination of several wealthy, powerful men, of which he was only one. However, none of the others became publicly associated with the film because Hearst so effectively drew attention to his own influence. Consequently, his actions not only filled his final years with anger and hatred but also resulted in the exact outcome he feared: being publicly and permanently defined by the movie.

In a contrasting example, Frederick Douglass, the legendary escaped slave who became an influential abolitionist, demonstrated how reacting with love and understanding to slights can prevent them from defining one’s life. Once, while riding on a train, a white man told Douglass to move to the baggage car because he was black. Another white man—a supporter—apologized profusely to Douglass for the insult, but Douglass replied that he wasn’t angry or hurt, but instead, recognized that he, Douglass, wasn’t the one degraded by this mistreatment; rather, it was the person inflicting the mistreatment who was degraded.

While this attitude of “love your enemies” is instinctively difficult to maintain, it’s what separates great leaders from temporary ones. Hatred does more to destroy the one who is hating than the one who is hated. Hate is debilitating: It will eat away at you with stress and unpleasant thoughts.

Love, though, is transformational: Even when you feel it’s undeserved, finding a way to love someone will allow you to get perspective on a situation and understand the forces at play that brought your failure about. You’ll resist placing blame on someone else and will be better able to see how you can emerge from your failure as a stronger person.

Why Chasing the Wrong Goals Is Self-Sabotage 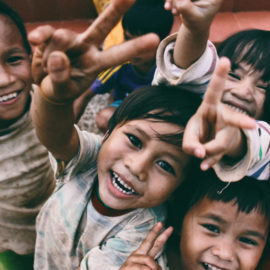 Why Do People Volunteer? Why Volunteering Matters