Where does our group mentality come from? How does it benefit us?

In his book The Righteous Mind, Jonathan Haidt argues that we can’t fully understand morality until we understand group mentality. He explains how we’ve learned to work together for the betterment of the whole, not just ourselves.

Read more to learn about the origin of group mentality and how it relates to morality.

Humans Are Both Selfish and Groupish

It might be easy to think that morality is primarily self-serving and blinds us to reality—we make decisions with our guts and then rationalize them so well we think we made them using reason; we cheat when we think no one will catch us and then convince ourselves we’re honest; we care more about others thinking we’re doing the right thing than we do about actually doing the right thing.

But this portrait of morality based solely on self-interest isn’t complete. In addition to being selfish, people are also groupish. We love to join groups—teams, clubs, political parties, religions, and so on. We are so happy to work with lots of others towards a common goal that we must be built for teamwork. We can’t fully understand morality until we understand the origin and implications of our groupish behavior and how our moralities bind us together, as well as blind us. The principle that morality both “binds and blinds” us is a focus of this article, which will explain how we’ve evolved to work together for the betterment of the whole.

Our minds work to protect our own interests (selfish) but also the interests of a group that competes with other groups (groupish). Human nature is largely selfish, but it has some groupish tendencies as well. Individuals can compete at the same time that groups are competing. The former competition rewards selfishness but the latter rewards teamwork, so we’ve evolved to maintain a mix of the two.

When two tribes compete with each other, and one tribe’s members trust each other while the other’s do not, the former tribe will be victorious because of its organization. These cohesive tribes function more like one individual than many.

The problem is, it appears that selfish people within a tribe are more likely to have kids because they’ll be more likely to survive, as they won’t lay their lives down for others. Darwin called this multilevel selection: The cohesive group wins, but within that group, the selfish individuals succeed. However, when we examine how and why humans actually started to work together, it’s clear that selfishness is actually a trait that is selected against.

Darwin argued there are multiple reasons why humans first banded together.

It’s clear based on the way that we evolved that in practice in actual armies, the coward will not be the one most likely to return home, he’ll be the one most likely to be left behind and picked off. If he does manage to make it back, his traits will be repulsive to finding a mate. This builds on itself, so every time a group selects for people who are loyal, the next generation will share that trait even more widely.

(Shortform note: For more on the evolutionary basis of selfishness and groupishness, read our summary of The Selfish Gene.)

Some people took this Darwinian logic and applied it everywhere and to all species of animals until the mid-1960s when biologist George Williams questioned these applications.

Think about deer: Some people argued that herds of deer evolved to become faster over time because fast herds were better at evading predators. Clearly, this is not true: It was individual deer who became increasingly capable of evasion because the ones that survived from the herd were the faster ones.

Williams spent most of his book, though, incorrectly arguing that group evolution doesn’t exist at all. That, along with Richard Dawkins’s 1976 book The Selfish Gene, which argued a similar point (while admitting that it’s possible that group evolution could exist), made the Darwinian argument for group evolution in humans fall entirely out of style. Instead, whole disciplines in the social sciences sprung up around the idea that humans will always do the action that maximizes their own self-interest, and everything that looks like cooperation is actually still somehow self-interest.

Clearly, it’s not true that self-interest is the source of every behavior. People donate anonymously to charities or put themselves in harm’s way to save people they don’t know. Humans are not like most other animals: We can occasionally act as selfless as a bee.

Consider the response in America to the 9/11 attacks: People drove hundreds of miles to New York in the days following to see if they could help dig people out of the wreckage. Many donated blood or signed up for military service. An event spurred most people in the country to adopt a group mentality—to think in a groupish manner.

Experts are still divided on whether actions like rallying around the flag after a national tragedy are groupish activities or are selfish ones that just manifest differently than usual. Here are four examples that prove the former point right:

A note on all of this: When two groups “compete,” it doesn’t necessarily mean that they’re engaged in combat. “Competing” just means they’re fighting with one another to better accumulate resources. Essentially, whatever group is more efficient at gaining resources and then turning the resources at their disposal into offspring will be the most successful. War can hinder this, but group mentality is not usually about how to harm the outside—mostly, it’s about how to be more successful on the inside.

It’s also important to remember that while group mentality is part of our evolution, we are still mostly selfish and individual. We’re about 90 percent chimp, who is only self-interested, and only 10 percent bee, who is group-interested. 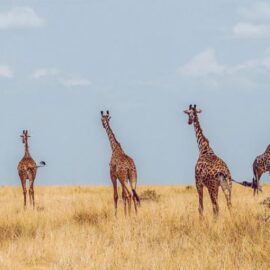