What is general relativity vs. quantum mechanics incompatible? Is it possible to unite the four forces with the subatomic particles?

The predictions of relativity, which deal with phenomena on the massive, universal scale, break down when applied to the subatomic level of quantum mechanics. Uniting quantum mechanics and relativity is one of the great challenges to establishing a complete theory of the universe.

Keep reading to learn about the general relativity vs. quantum mechanics dilemma.

Quantum mechanics is incompatible with the predictions of general relativity—even though both, paradoxically, are well-tested theories that make accurate predictions about the universe. So much of what we think we know about physics simply breaks down at the quantum level, where particles behave in strange and—thanks to the uncertainty principle—unpredictable ways.

The Theory of General Relativity

Einstein’s general theory of relativity, proposed in 1916, stipulated that gravity was a special force that existed because of the curvature of space-time itself. Space-time, according to this theory, is not flat. Thus, orbiting bodies travel in geodesics—the shortest distance between two points. This is the nearest thing to a straight line. Thus, the Earth actually follows a linear path through four-dimensional space-time, but it appears to us to be an elliptical orbit.

It would also follow from general relativity that time would move at different speeds at different points in space. Because of the differing strength of a body’s gravitational pull at different points in space-time and the effect this has on light-wave frequencies, events on Earth would appear to be taking a longer time to happen to an observer at the top of the mountain—time would be moving quicker on the mountain because light from Earth would be reaching it at a lower frequency. This has actually been tested: clocks have been shown to run slower at higher altitudes than lower ones, as general relativity predicts they would. The main takeaway? Everything is relative. Bodies moving through space-time affect the curvature of space-time itself, which, in turn, affects the movement of those bodies. Nothing is static or absolute.

Comparing It to Quantum Mechanics

The test of a good theory is if it describes observed reality and makes reliable and accurate predictions about the future. By these standards, general relativity is a good theory—it successfully predicts the deviations in orbits, bolstering our faith in the theory.

The best theory today that attempts to bridge the gap between general relativity and quantum theory is string theory. String theory replaces the concept of particles with strings—instead of a particle occupying a single point in space at a single point in time, there are strings occupying a line in space across each point in time. Thus, all points correspond to a time and to a position on the string. Waves travel up and down the string, causing different strings to come together or split apart (a process analogous to particle collisions).

One complication with the string theory, however, is that for it to work, it requires up to 26 dimensions of space-time. One example of these extra dimensions would be a donut-shaped universe, in which, to travel from point A to point B, one would need to travel around the inner ring of the donut. But the shortest possible route would actually be to travel through the center—a hitherto unimagined and inconceivable dimension! 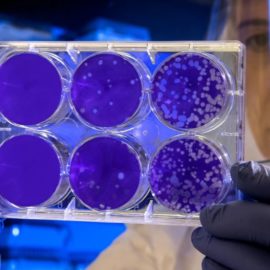