Where do governments get the money they spend? What are the tax revenues used for? And what happens when governments go into debt?

Generally, to pay for current benefits like the military and civilian personnel, governments use tax revenues, allowing those benefited to pay. For investment projects like highways and schools, governments sell bonds, go into debt, and essentially push the cost onto future generations who will benefit from the investment.

Keep reading to learn about the economics of government spending, what happens when governments go into debt to finance current expenditures, and the implications of taxation.

The national debt tends to grow with inflation, population growth, and national income growth. The debt is better considered not as an absolute number but rather a percentage of GDP.

In some cases, a high national debt is secondary to other concerns, such as fighting World War II. However, a high peacetime national debt is troubling, since there is no reduction in spending in sight as there is at the end of the war.

When the government goes into debt to fund current expenditures – this is as sensible as an individual borrowing more than current income to pay for dining this year. Even though this is politically favorable since it avoids raising taxes, future generations will pay the price.

Much of the US government’s debt is held by its citizens, resulting in internal transfers. In effect, the sequence runs like this: citizens buy bonds, the government gets money to spend, the bond comes due, and the government collects taxes from its citizens to pay bonds. When instead the bonds are held internationally, then future generations of Chinese will collect wealth from future generations of Americans.

The national debt can increase in size to a tipping point that discourages further investment. When the debt is large enough, investors will worry about the creditworthiness of the nation, as well as its ability to turn over these bonds without raising interest rates, which would in turn raise interest rates economy wide as other investment funds compete for investor funds, which would in turn reduce credit and aggregate demand.

Counter-intuitively, raising tax rates may not lead to higher tax revenues. Higher taxes may cause people to move to lower taxed jurisdictions, like other states, or buy less of a heavily taxed good.

In essence, changes in taxation can have nonlinear effects beyond the literal change in tax rates. Beware of proposals with definite numbers like a “$500 billion tax cut” since these are often based on (politically biased) assumptions. Congress provides assumptions to the Congressional Budget Office; governments apply optimistic rates of return on its coffers and make their liabilities appear smaller than they are.

People who have different sources of income and portfolios of assets will be affected differently by taxes.

Wealthier people tend to have a greater percentage of their wealth in investments. Poorer people spend a higher percentage of income on consumer goods. People with relatively high salaries may not be wealthy at all, depending on their spending and age – a 60 year old earning $120,000 after 30 years of work is different from a 30 year old earning the same amount, and both are different from a millionaire who has retired and is earning no wages.

Thus, taxes can have effects that aren’t obvious:

Who bears the real burden of a tax can be unclear.

Mandatory worker benefits may be paid by the employer, but this can be directly reflected in lower wages for the worker and lower employment – thus the burden of taxes has actually fallen on the worker. For instance, a worker who adds $50k to a company might be paid $45k, but if the company were required to pay $10k in taxes for this worker, the company might bid no more than $40k for wages.

Taxes cannot be passed to consumers when applied to products in a jurisdiction, if the product is produced in other jurisdictions not subject to this tax. Charging $10 tax on an ounce of gold in South Africa wouldn’t raise prices of gold by $10 in South Africa, since consumers could purchase similar gold elsewhere without this tax. A vendor that tried to pass this tax to consumers would become un-competitive, and so the vendor pays the price of the tax more than the consumer does.

Local property taxes and bonds account for much of the revenue of local governments.

Local governments can increase property taxes by replacing low-valued property with higher valued property. Eminent domain is one way to accomplish this, though it often means paying lower-than-market values for property since the outraged few owners are outnumbered by the many others who benefit. These lower prices are then distorting, since the new owners build something they might not otherwise build when they don’t have to bid the property away from the original owners.

Bonds are popular since they essentially push the burden of today’s spending on future taxpayers, maximizing current political benefits.

Many municipal and state bonds are tax-exempt, making them valuable for high-income earners who don’t really care what the bonds are for (unlike when they purchase stocks). Thus larger amounts of money than optimal may be available to fund local projects, with less consideration of their cost-benefit tradeoffs.

Furthermore, when revenues go into the general treasury rather than the account of the government agency, there is even less incentive to set prices high enough to cover the cost. The government agency may not face pressure to be financially sustainable.

These losses were made up from tax revenues.

Much is said about justifying below-cost prices to make services accessible for the poor. First we have to put aside the question about whether the poor are a permanent class or merely young people early in their careers who will grow wealthier, as discussed earlier. Barring this, it seems inefficient to subsidize users of the service by charging all taxpayers more money, rather than charging the correct prices to the service’s users and directly helping the poor with money or vouchers.

Inversely, sometimes things are priced above cost, such as bridges that collect tolls well after costs have been covered. The agency in charge can continue collecting these funds to expand its bureaucratic empire.

It is politically advantageous to promise pensions that will be paid by future generations (who may not even be of age to vote), even if the future economics don’t balance out. European pensions are generous – in Italy the average working man retires at 61, but pensions cost 15% of the country’s GDP; pensions in the US pay 40% of pre-retirement earnings, while those in Spain pay 80%, and those in Greece pay 96%.

A declining birth rate and increasing life expectancy are putting promised pensions at risk. The government may simply not be able to pay the pension in the future. Delaying the retirement age is one method to combat this, disguised as the euphemism “ending forced retirement.”

A Wiser Look at Government Spending

In discussing the economics of government spending, it is also important to consider the real opportunity cost of government expenditure alongside a literal cost. A government agency forbidding homes built in a certain area may cost little to maintain, but the economic cost in not having valuable assets built may be vast. Similarly, the costs of imprisonment may seem very large, but this needs to be compared to the cost of having career criminals at large in society.

Politicians also tend to spend on flashy things that earn them press and votes, rather than less sexy infrastructure improvements – football stadiums, rather than fixing potholes.

Governments tend to be “automatic stabilizers” in that their revenues and expenses counteract the economy’s momentum. In deflationary times, when production and employment reduce, the government collects less tax revenue and pays more in unemployment and subsidies – thus adding purchasing power and cushioning the decline. Conversely, when production and employment boom, more tax revenues are collected and less benefits are paid out, allowing the government to remove purchasing power and holding back inflation.

The Economics of Government Spending—Explained 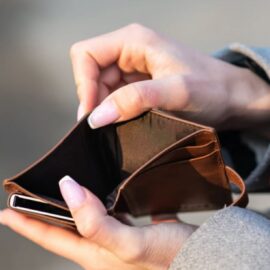 Is National Debt a Problem? Don’t Believe the Hysteria