What is the second agreement of Toltec enlightenment? What does “don’t take anything personally” actually mean?

In The Fifth Agreement, don Miguel Ruiz and don Jose Ruiz describe five “agreements” to make with yourself that adjust the way you see the world and your place in it. The second agreement is this: Don’t take anything personally. In other words, understand that not everything is about you.

Keep reading to learn more about the second agreement: Don’t take anything personally.

The second step on the Toltec path to reclaiming your personal freedom is to understand that the words and actions of others are based on their own relative perceptions: They’re not actually about you. Thus, don’t take anything personally.

Why is this the case? Because, as we’ve discussed, we all live in our own private world. We see things differently and we hold our own subjective beliefs. The authors explain that due to this subjectivity, everyone you know has an image of you in their head wholly based on their subjective perception of you and your actions. This image includes assumptions about who you are, what you think, what your life is like, and what you’re good and bad at.

Ultimately, these assumptions can’t possibly reflect the truth of who you are because nobody has a clue what’s going on inside your head.

They’re Not Angry at You

Because most people don’t know the real you, if someone’s angry or frustrated because you didn’t do what they wanted, don’t blame yourself for it. According to the authors, people expect you to act in a way that conforms with their imaginary version of you—remember, they think their perception of you is real. If another person claims to want something from you, they really want it from the person they think you are. The real you isn’t obligated to do anything they want, to be what they want you to be, or to play along with their imagination. In short, it’s not your fault if you don’t live up to someone’s expectations.

Relatedly, the authors say, don’t take anything personally when someone mistreats or misunderstands you. When others lash out at you, they’re responding to a perceived offense in the reality they see—not yours. The people around you don’t act according to the reality you see—they act according to their own reality. Nothing they say or do happens because of you.

Consider what life would be like if you don’t take anything personally. It just might change things for the better. 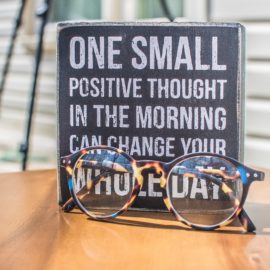 Change Your Negative Mindset: A Guide to a New You