What is the meaning of Turiya? What does Eat Pray Love say about finding a Turiya state?

Turiya is a state of mind, considered the fourth level of consciousness. Elizabeth briefly achieves a Turiya state.

Keep reading to find out how Elizabeth Gilbert found a Turiya state in Eat Pray Love.

Finding Transcendence and The Turiya State

In order to find the Turiya state, Elizabeth first had to find the Turiya meaning. The Key Hostess was the shepherd and support system for the attendees of a week-long silent retreat at the Ashram. One hundred people descended from around the world to immerse themselves in meditative practice. Gilbert was the one who greeted them, answered their questions, and addressed their concerns. She was the only person they were allowed to speak to. She likened it to being an activity director on a cruise ship.

Gilbert loved her new role. Everything in her life seemed to have culminated in her ability to do this job perfectly. She was intuitive and sensitive from her childhood. She was a good listener from days of bartending and working as a journalist. She was a good caretaker after years of twisting herself in knots to care for the men she’d loved. And she understood where these people were coming from emotionally and spiritually. Many of them were likely afraid of the journey they were about to take. Having just traversed this unknown territory herself, Gilbert could be empathetic and patient with them, and learn more about the Turiya meaning without even realizing.

This intuition into their fears helped her see how brave the attendees were for making themselves so vulnerable. She found love for them and watched over them with care each day when they sat in silent meditation, seeking to achieve turiya.

The Turiya state is considered the fourth level of consciousness. The other three levels—waking, dreaming, and dreamless sleep—are experienced by everyone. But this fourth level is the purest form of awareness. In this state, you are present with God and full of bliss. Many people have experienced this state at fleeting moments. They may not have recognized it, but for one second, everything in life seemed beautiful and perfect. The goal of life, according to the Yoga tradition, is to learn to live within this state contentedly.

Gilbert wasn’t meant to meditate with the attendees. But one day, while watching over their silent meditation, she accidentally fell into a meditative state. Without even trying, she’d slipped into a turiya state.

Gilbert had a difficult time describing what this state felt like. It wasn’t a hallucination. It wasn’t a major event replete with fanfare and bells and whistles. She described it as a simple occurrence in which she felt the deepest sensation of love in her life. She wasn’t thinking or acting. She was just feeling.

In this state, her heart was wide open and filled with compassion. She felt bonded to everyone and everything. Her thoughts were still there, but she heard them as background noise from a radio. They now seemed inconsequential, as did all of her previous ideas of who she was. Her whole life had been designed around the search for happiness. But here it was all along, inside her.

Then, Gilbert vocalized her desire to stay in this state forever, and as soon as she did, she felt herself being pulled out of it. She started to scramble, not wanting to lose the sensation. But each thought of “I want” or “I don’t want” brought her closer to reality until she was fully back. Her ego had returned, and she looked around and saw the regular world and her regular self.

Gilbert felt sad and anxious about losing that state of grace. But she also felt a different feeling. There was a new presence next to her. This presence was her witness, or the transcended form of herself. She understood that her belief that the turiya state could disappear meant she wasn’t ready to exist there yet. Her journey wasn’t over. She still had more to learn. 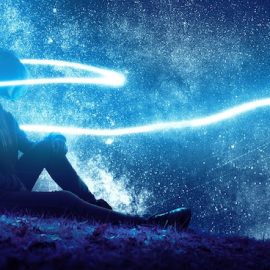