Who are the most important The Tattooist of Auschwitz characters? How did each character play an important role in Lale Sokolov’s life?

The Tattooist of Auschwitz characters each played an important role in Lale’s life. If it weren’t for many of the characters in this list, Lale never would have met Gita and may not have survived his time in Auschwitz.

Keep reading to learn about The Tattooist of Auschwitz characters.

The Tattooist of Auschwitz: Characters You Should Know

The story of The Tattooist of Auschwitz is based on the accounts of the real-life survivor, Lali Sokolov, as told to the author 70 years after the events. The author has stated that 95% of the story is based on Lali’s retelling and the rest imagined as creative license.

However, certain historical organizations have reported that many of the events described in the novel are inaccurate or outright impossible. Therefore, this story should be viewed as a dramatized account of the characters’ lives based more on memory than factual data and not be taken as a true historical account of what life at Auschwitz was like for the thousands of prisoners held there.

Here is a list of The Tattooist of Auschwitz characters from the book.

Lale Eisenberg (a.k.a. Lali Sokolov) is main The Tattooist of Auschwitz character. In April 1942, he is a 25-year-old man from Slovakia who finds himself on a cattle train heading into the night. For five days, Lale and hundreds of men are shuttled cross-country in carriages packed so tightly with bodies, they have to stand for the entire journey. Lale, like most of the young men on the train, has volunteered to work for the Germans in exchange for his family’s safety.

Lale is dressed in a suit and tie. He believes in dressing well and making a good first impression. In his suitcase, he’s packed his other suits and books from his mother. He also has a small sum of money stuffed into his suit pocket. He hopes that between the money, his ability to speak 6 languages, and his professional appearance, he’ll be able to secure a high-level job once they reach the labor camp.

Lale uses his power to court the young woman he can’t stop thinking about. He sends her a letter through a friendly SS officer, and the two finally meet. Her name is Gita Furman, and she is as enchanted by Lale as he is by her. They begin meeting in secret, and their love blooms despite their horrifying surroundings.

Lale’s promise to escape the camp now includes Gita Furman, and everything he does is now attached to making her life at the camp easier. He feeds her chocolate and watches her face come to life. He steals a chocolate-y kiss, and they swoon like teenagers. He also arranges for her to work in the administration building where it’s warm and safe. He tells her that one day they will marry and have a family, and despite her despair, Gita starts to believe him.

This The Tattooist of Auschwitz character is the reason Lale survived a bout with typhus. The old man introduces himself as Pepan. He is the Tätowierer—the tattooist. Lale bristles when he realizes this is the man that marked him the first day, but he knows the man had no choice. Pepan is French. He was an economics professor captured for his anti-German political beliefs. He offers Lale the opportunity to work with him. He says this work will help Lale survive.

One day, Lale shows up to work and finds the table and equipment set up, but Pepan is not there. There is no mention of Pepan, and Lale receives no answer when he asks.

Lale is now the new tattooist, and Baretski is his new direct supervisor. Their fates are now entwined, Baretski tells Lale, and he knows Lale will not do anything to embarrass or endanger him.

Baretski is one year younger than Lale, but his personality is more like a teenager. He talks about girls in crude ways and knows nothing about matters of the heart. Lale tries to give him advice on how to treat a woman, seeing an opportunity to get on Baretski’s good side. But Baretski scoffs.

Lale encounters a new member of the SS staff one day while tattooing arrivals. It starts with a whistle, an eerie sound within the confines of Auschwitz. He recognizes the tune but can’t place it. The whistling gets louder. Lale finally glances up and sees a new doctor walking toward him.

There is something more sinister about this doctor than the others he’s seen. Lale tries to focus on his work, but his concentration is disrupted when the doctor leans over and inspects the tattoo he’s giving. Lale holds his breath until the doctor walks away. Baretski tells Lale the doctor is named Mengele and is so scary, even he is afraid of him.

Cilka is Gita’s co-worker. A year ago, Schwarzhuber, a senior officer, summoned Cilka to a secret room. When she arrived and saw a four-poster bed, she knew what she would have to do if she wanted to live. This was also why she was allowed to keep her long hair. She’d been going to the room ever since. Lale is beside himself. He tells Gita that Cilka is a hero for doing what she needs to do to survive. It’s a form of resistance to not allow the Nazi’s to take her life.

The Tattooist of Auschwitz character got her own spinoff book Cilka’s Journey in 2019.

Lale’s sister, Goldie, was more fortunate. She was still working as a seamstress, which meant she was the sole breadwinner in the family. She traveled to and from work in the dark. Her superior skills were the only reason her boss risked the wrath of the Germans to keep her on. 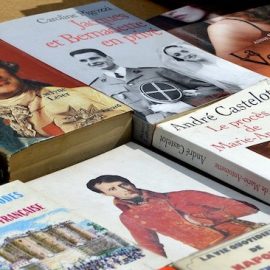