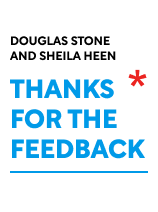 This article is an excerpt from the Shortform book guide to "Thanks for the Feedback" by Douglas Stone and Sheila Heen. Shortform has the world's best summaries and analyses of books you should be reading.

How do you react to feedback? Do you tend to get defensive when receiving feedback, especially when it’s negative? Why do you think that is? How long does it take you to “recover”?

In this article, you’ll learn why you react to feedback the way you do, according to communication experts Douglas Stone and Sheila Heen.

Our Instinctive Reactions to Feedback

The primary difficulty in receiving feedback is that it tends to trigger emotional responses that cloud our judgment and prevent us from properly comprehending the feedback.

According to Douglas Stone and Sheila Heen, the authors of Thanks for the Feedback, your individual reaction to feedback involves three variables:

The combination of these three variables together makes up your temperament.

Though you are emotionally affected by individual events, these emotional adjustments happen against a more stable backdrop of your general state of mind: your baseline. Once the initial rush of an event has passed—the thrill of landing your first job or the sadness you felt when your dog died—you return to your general baseline. Each person has her own individual baseline and these can vary enormously. One person might seem perpetually grumpy while another seems inexplicably upbeat.

Some people will swing farther from their baselines than others in response to feedback; some stay within a relatively narrow emotional band while others react more strongly in either direction—positive and negative.

But whether or not we are highly sensitive or fairly even-keeled, “bad” typically registers more strongly than “good.” We respond faster and stronger to threats than we do to pleasures. This explains why we often focus on the one negative remark that’s sandwiched between ten positive comments.

The final variable is the duration of your emotional swing is how long it takes you to return to your baseline. Again, there is a lot of individual variability. Some people recover quickly to even the most distressing feedback, while others might still be feeling the sting months later. Likewise, some people can maintain the glow of a positive review for the rest of the day, while for others, it fades within minutes.

Our recovery tendencies can affect the strength of our swings and vice versa, creating both virtuous and vicious cycles. Those who hold on to their positive feelings after a boost can find it easier to later ride out a bump. Those who have trouble recovering from a setback often have a weaker subsequent response to positive feedback.

Like what you just read? Read the rest of the world's best book summary and analysis of Douglas Stone and Sheila Heen's "Thanks for the Feedback" at Shortform.

Here's what you'll find in our full Thanks for the Feedback summary:

How to Get Your Book Published: Stephen King’s Advice