Is there any evidence that Jesus existed? What kind of evidence, and how reliable is it? Is there any proof Jesus was a real person?

Lee Strobel set to find the truth: is there evidence that Jesus existed? Strobel grapples with various pieces of evidence, talks to scholars, and works to raise objections to the idea that Jesus might be real. In the end, he comes up with proof Jesus existed?

Find out more about whether or not there is evidence that Jesus existed, and what it means for Christianity.

Is There Evidence that Jesus Existed?

At the culmination of his investigation, Strobel locks himself in his home office to review everything he’s learned, searching for proof Jesus existed, and proof Jesus was a real person. Through his interviews and research, he’s established the following:

1. The biographies of Jesus (the gospels) can be trusted.

Whereas Strobel once thought the gospels were legends concocted by biased authors, his conversation with Blomberg confirmed that the gospels bear all the markings of trustworthy eyewitness accounts. This is proof that Jesus was a real person.

2. The biographies of Jesus stand up under examination.

That the gospels harmonize on the major points while diverging on minor ones suggests that (a) the authors are reliable and (b) the overall contours of Jesus’s story are factually accurate. Also, the early church couldn’t have thrived in Jerusalem—as it did—if the gospels had been exaggerated: everyone would have known the disciples were lying. But is this enough proof Jesus existed?

3. The text of Jesus’s biographies hasn’t been amended or adulterated by later authors.

Strobel’s interview with Bruce Metzger confirmed that the documents on which the New Testament is based date to an extremely early period in the church and are authentic.

There is more historical evidence that Jesus existed than for many historical personages whose reality we take for granted. Secular sources attest to Jesus’s ability to perform miracles, his crucifixion, and his early followers’ belief in his Resurrection.

No archeological finding has disproved the New Testament, and Luke’s gospel has proven especially accurate, with references to geographical and cultural landmarks later confirmed by archaeological discoveries. This is further proof of Jesus Christ.

7. The historical Jesus is the same as Jesus Christ.

The Jesus Seminar has attempted to distinguish between a naturalistic Jesus and the mythological Jesus featured in the gospels, but its scholars rely on a number of specious sources to make their case. The evidence that Jesus existed for the gospels’ account is far more robust and convincing than for the Jesus Seminar’s theories.

8. Jesus believed he was the son of God.

Some skeptics have argued that Jesus didn’t actually believe he was the Messiah prophesied in the Old Testament. However, the numerous references Jesus makes to his own provenance and deity confirm he did in fact believe he was the Christ, sent to redeem the world.

9. There is no evidence of Jesus Christ to suggest Jesus was mentally disturbed.

Those with paranoid schizophrenia or other mental illnesses exhibit an array of symptoms beyond delusions of grandeur, including antisociality and trouble expressing emotion. Jesus exhibited none of these symptoms, and he supported his claims of divinity by performing independently verified miracles.

10. Jesus exhibited all the traits of God.

Further proof of Jesus Christ is his divine traits. Although some believe Jesus voluntarily limited his divine powers when he was incarnated, the New Testament shows that he possessed all the attributes of deity, including omniscience, omnipresence, and omnipotence.

11. Unlike claimants before or since, Jesus matched all the attributes of the Messiah.

Old Testament prophets made a number of predictions about the identity of the Messiah, including minor details like his place of birth and whether he would be buried with no broken bones. The odds that someone could match these prophecies by chance is infinitesimal. Jesus, of course, fit these predictions completely.

Skeptics of the Resurrection have attempted to explain away Jesus’s “rise” by claiming he never actually died on the cross. Detailed medical analysis of Jesus’s brutal beating before the crucifixion, as well as the damage done by the crucifixion itself, can’t but conclude that Jesus was dead when he was entombed. This is evidence that Jesus existed at one point.

Is this evidence of Jesus Christ? The relevant canonical sources for the empty tomb—the gospel of Mark and the creed in 1 Corinthians—have been dated to within a matter of years of Christ’s Resurrection; thus it’s highly unlikely their accounts are the product of legend. Skeptics at the time implicitly accepted that the tomb was empty, and the fact that the canonical accounts describe women discovering the empty tomb is a testament to the accounts’ reliability: If the New Testament authors were making the whole thing up, they would undoubtedly have had men discover the empty tomb (women’s testimony wasn’t admissible in the Jewish courts at the time).

14. Jesus appeared to witnesses after his death.

There are many witnesses, adding more proof of Jesus Christ. The early-authored book Acts contains references to Jesus’s appearance to people after his death, and the gospels describe encounters Jesus’s followers and others had with Jesus. There is also a wealth of circumstantial evidence of Jesus Christ that corroborates the biblical account of the resurrection, including the disciples’ martyrdom and the remarkable speed with which Jews converted to Christianity. This can all be taken as evidence that Jesus existed. 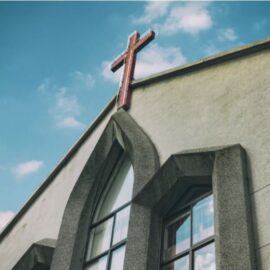 The Church of God: More Than Just a Building

One thought on “14 Compelling Pieces of Evidence That Jesus Existed”