What are the benefits of a diversified business? Should you develop your business diversification strategy?

Diversified Business: A Path to Success

In general, CEOs have to do two things to succeed. A diversified business can help them achieve success in both these areas:

Most CEOs and most management books focus on the former. In contrast, Outsider CEOs in the book focused on the latter. Rather than seeing themselves as company operators, the outsider CEOs saw themselves as investors and capital allocators first and foremost.

In contrast, typical CEOs issued shares to fund costly acquisitions, preferred not to buy back stock or raise debt, and paid dividends frequently. In the conglomerate era, they aggressively acquired companies believing they could improve profits through scale or synergies; this was often a mirage that never materialized. All these activities tend to result in lower performance by the author’s favorite metric—price-per-share.

Note that the optimal choices vary from company to company, from industry to industry, and between different time periods. The point is not to blindly mirror what the outsider CEOs did—it’s to examine all of the tools in your toolkit, and choose the best one based on rational analysis. Check out these business diversification examples to see how each CEO employed their business diversification strategy.

One of the most successful business diversification examples is General Cinema. In 1962, when Dick Smith was 37 years old, he took over as CEO of General Cinema, and immediately set to work making the company a more diversified business.

Smith’s first move was to expand the company’s theater footprint. He innovated in three ways:

By the late 1960s, he figured that theater growth would likely plateau at some point, so he began looking to diversify into other businesses. His ultimate goal was to have three legs in the company, each a strong business that wasn’t correlated with the others.

With this diversified business established, Smith searched for his third leg. He explored broadcast media, though the prices were so high he never made a meaningful entry. He engaged in making minority investments in public companies.

His opportunity came in 1985, when he was called in to help retail conglomerate Carter Hawley Hale (CHH) avoid a hostile takeover. CHH owned properties such as department stores Broadway and Neiman Marcus. CHH desperately needed an investor to buy a substantial portion of shares to defeat the takeover, and they needed a response within a literal few days.

Smith realized that the seller’s urgency and tight timetable meant that very few buyers would participate, and so he could have immense negotiating leverage. Over the weekend, he and his team scrutinized the deal, prepared financing, and closed the deal by Thursday.

Flexing his leverage, Smith secured very favorable terms—a preferred security guaranteed them a 10% return, gave them an option to convert to 40% of common stock, and options to buy operating divisions of CHH. In essence, they borrowed money at 6% to earn 10%.

Later, General Cinema exchanged its 40% stock in CHH for 60% of the retail division that included Neiman Marcus. Smith saw that Neiman Marcus was poorly managed by its owner, and growth of stores would allow a premium on exit.

Altogether, this investment in CHH would ultimately return at a rate of 51.2%—good work for a weekend. Having an intelligently diversified business led directly to profits for investors.

Tom Murphy’s Capital Cities was already engaged in diversified business. But Murphy chose to scale back, and make sure that they were only acquiring companies that could make a profit. His stance on product diversification was that it should be related to the core business. When acquiring companies, Capital Cities focused on businesses it knew it could run well—media businesses that it could buy, make more efficient using its operating playbook, and thus turn into productive assets that could fuel further similar acquisitions. They knew the business model well—advertising-driven revenue with good margins and strong competitive barriers.

In contrast, its peer company CBS engaged in the conventional practice of acquiring unrelated businesses, such as toy businesses and the Yankees baseball team. The conventional thinking was that these acquisitions would lead to diversification, thus avoiding the variability of economic cycles, as well as synergies, where larger companies magically become more profitable through efficiency. However, like many acquisitions by conglomerates of this era, these did not materialize in meaningful synergies or better profits. Often, conglomerates acquired too rapidly and underestimated the difficulty of improving operations to realize cost efficiencies.

Warren Buffett’s large portfolio is a business diversification example that speaks for itself. Having had extensive experience in investing before starting Berkshire Hathaway, Buffett had a wider range of investment options than most CEOs. Typical CEOs only look within their immediate industry. In contrast, Buffett has made investments in a vast array of industries (from beverages to industrials). Even his investments take a wide range of flavors, including investments in both private and public companies, both minority investments and complete acquisitions, and at times making big bets in bonds and currencies. As a result, Berkshire Hathaway is a highly diversified business, and it’s highly valued.

While former CEOs Bill Anders and Jim Mellor kept acquisitions to a minimum, Nick Chabraja made one of its largest acquisitions. This product diversification move made General Dynamics a more diversified business.

Observers criticized the move as departing from Anders’s 3-point strategy from 1991, but Chabraja had a deeper logic—Gulfstream had stagnated in product development. In contrast, General Dynamics had considerable experience in aircraft from its previous days, and this expertise could be used to grow Gulfstream. In turn, Gulfstream would help diversify General Dynamics away from the fluctuations in military defense spending.

In an unusual move for outsider CEOs, Chabraja sold stock to fund the purchase of Gulfstream. However, his logic was that General Dynamics was trading at all-time highs (23 times projected earnings, vs. the recent average of 16). He could sell ⅓ of the company to buy a business that would contribute half of its cash flow—a clear profitable arbitrage.

Most large companies have some form of a diversified business. A diversified business helps ensure economic protection, and can increase cash flow. No matter the size of your company, or even if you’re thinking in terms of persona finance, having a diverse portfolio is important. 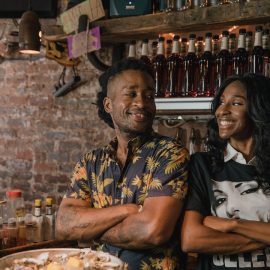 Why Reputation Is Important: Leveraging Trust

How to Improve Your Oral Communication Skills