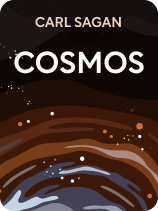 This article is an excerpt from the Shortform book guide to "Cosmos" by Carl Sagan. Shortform has the world's best summaries and analyses of books you should be reading.

Did Carl Sagan believe there’s life on Mars? Did he believe that humans should colonize the planet?

At the time Sagan wrote Cosmos, no compelling evidence for life has been found on Mars. Sagan says that as long as life isn’t found, humans should create an atmosphere on Mars and attempt to colonize it. If life is found, that’s another story.

Here’s what Carl Sagan wrote about space exploration and Mars.

Now that we have a solid working model of the universe, and have been able to directly observe much of it via telescopes, we move into the age of physical exploration. We’ll begin with discussing what modern astronomers have discovered about the celestial bodies in our own solar system, then look at the potential that lies beyond our solar system. Sagan offers some insightful views on the potential for interstellar travel and for discovery of life on other worlds.

On July 20th, 1969, humans made the first trip to a destination off the planet Earth and set foot on the moon. The moon is the nearest celestial body to us, and it remains the only one humans have ever traveled to. However, Sagan explains that we’ve been able to create vehicles that can travel much further, enduring the inhospitable climates elsewhere in the solar system, and send information to us.

At present, Sagan says that none of the atmospheres and climates of the other bodies in our own solar system are inhabitable by anything like the kind of life we have here on Earth. But he reminds us that life could take any number of forms, and because it would have evolved in a different atmosphere than ours, it could take forms that we might not expect.

(Shortform note: Astronomers now believe that Venus may have once had an atmosphere more like Earth’s, but that greenhouse gasses accumulated and eventually made it the volcanic inferno it is now. Venus is the hottest planet in our solar system, with a surface hot enough to melt lead. Its previous oceans were boiled away, and its atmosphere became dense carbon dioxide, with sulfuric clouds. Astrobiologist Vikki Meadows believes it’s an example of an alternate planetary evolution that could serve as a warning for Earth about “how terrestrial planets die.”)

Looking for Life on Mars

So far, Sagan explains, we’ve been able to fairly extensively study the Moon, Mars, Venus, Jupiter and its moons, and Saturn and its moons. Sagan says that Mars has been the primary focus of study because its polar caps are covered with ice—which means there’s the possibility that it was once liquid water, which in turn denotes the possibility for life.

(Shortform note: In 2016, NASA’s Mars Reconnaissance Orbiter provided images that astronomers believe suggest liquid water is presently flowing on the surface of Mars. They believe the water would be briny, containing high levels of salt, which would allow it to remain liquid in otherwise freezing temperatures. Other scientists have contested this evidence, arguing that the features are more likely created by sand.)

As of the writing of this book, Sagan says that no compelling evidence for life has been found on Mars. Carl Sagan, however, says we’ve been able to map the entire planet with orbiting satellites, and the US’s Viking lander has successfully landed on its surface and collected and tested soil samples. While some of the microbiology tests showed promise of chemical reaction, Sagan says there was no definitive evidence of the kind of life we know.

(Shortform note: The Curiosity rover landed on Mars in 2012 and is still exploring the planet as of 2022. The major mission of Curiosity is to discover whether Mars may have once had the right environmental conditions to support simple life forms. In 2022, it returned data from an analysis of rock samples that contain a form of carbon associated with biological life. Scientists say they would still need more evidence to support a claim that there was once life on Mars, but the finding is compelling.)

Sagan speculates on what we should do if we did discover any form of life on Mars. He strongly feels that if we discover even the smallest microbial life we should leave Mars alone entirely, and do nothing more to interfere with it. However, he says if we conclude that there is no life on Mars, he can imagine possibilities for humans to colonize and settle there, after altering the atmosphere.

Spacecraft called Voyager I and II were designed to explore beyond our immediate neighbors. Launched in 1977, their mission was to fly beyond Mars, travel among the moons of Jupiter and Saturn, and then ultimately drift off into interstellar space forever.

(Shortform Note: This website shows the current locations of Voyager I and II, 44 years after their launch. Voyager II went on to explore Uranus and Neptune, and it’s still the only spacecraft to have visited those outer planets. They’ve both now flown beyond the solar system, into interstellar space, and are still in operation.)

Sagan tells us that Voyager I took pictures of three of Jupiter’s four largest moons, and Voyager II was able to capture photos of the fourth one, Europa. Europa is unique, he says, in that there are visible geometric lines on its surface that look like nothing else we know of, other than man-made canals. (Shortform note: See a video and photo of Europa here.)

Another one of Jupiter’s moons, Io, is unique in that the Voyager images show active volcanoes over much of its colorful surface. Sagan says this appears to be a newer planet still actively forming, with a rapidly changing landscape. (Shortform note: See a photo and more in-depth description of Io here.)

Like what you just read? Read the rest of the world's best book summary and analysis of Carl Sagan's "Cosmos" at Shortform .

Here's what you'll find in our full Cosmos summary : 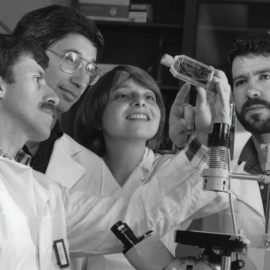 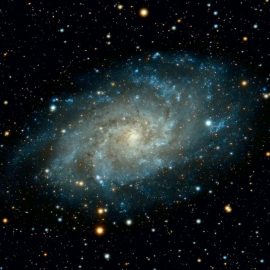