The benefits of smaller class sizes are valuable, but smaller isn’t always better. We’ll look at examples from around the world that demonstrate that it’s possible for a class to be too small.

Countries (and parents) around the world have devoted vast amounts of money to keeping class sizes small, believing that the smaller the class, the higher the achievement of its students. They know the benefits of smaller class sizes. But the inverted-U curve tells us that smaller classes are only better for students up to a certain point. Do studies bear this out?

Large classes: Kids in large classes, such as those in Israel that regularly have 38 or 39 students, perform worse than those in a class of 20. This makes sense. Smaller class sizes mean more individual attention for each student.

But smaller class sizes do not necessarily lead to higher achievement.

Small classes: But with very small class sizes (under 12 kids), anecdotal evidence suggests student learning is impaired. (Much of this evidence comes from polling teachers and collecting anecdotes rather than depending on evidence from rigorous studies.)

The Detriments of Smaller Class Sizes

Why would small class sizes lead to lower achievement?

The relationship between class size and achievement is one of many that fits the curve of an inverted-U graph. An inverted-U graph is a curve that models the point at which something “good,” like money or effort, starts to make a situation worse. In this case, the “good” that is only good to a certain point is class size. This graph provides a visual for the idea that, while there are numerous benefits of smaller class sizes, small classes can hurt student achievement if they get too small.

Most of us tend to believe that when something is good (like strength, money, or small class sizes), more of it is better. But Goliath’s abundance of size, strength, and weaponry didn’t protect him from David’s rock–it made him more vulnerable. There is a point at which the accumulation of resources ceases to be an advantage and another point at which those resources become a distinct disadvantage. The visual representation of this theory is the inverted-U graph.

The inverted-U graph can represent many relationships. Knowing our lives often conform to its curve, remember that it’s possible to have too much of a good thing. When choosing a school for your child and contemplating the benefits of smaller class sizes, keep in mind that classes can be too small. 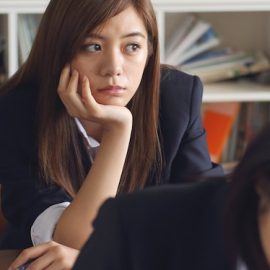 Easily Distracted: Why It’s So Difficult to Focus