What is aflatoxin B1? How does it enter your system, and why is it dangerous?

Aflatoxin B1 is a highly toxic carcinogen produced by the molds Aspergillus flavus and Aspergillus parasiticus. It enters the system through foods such as peanuts and corn that grow in contaminated soil. Aflatoxin B1 is strongly linked with liver cancer.

Aflatoxin B1 and Peanuts

When Cornell researcher T. Colin Campbell worked in the Philippines in the 1960s, his goal was to help mothers understand what local foods would be the healthiest for their children. Because you can grow peanuts almost anywhere, Campbell and his fellow researchers decided to use peanuts as their primary protein source. But this was problematic.

The Problem with Peanuts

Peanuts in the area were contaminated with aflatoxin B1, a toxin produced by mold. aflatoxin B1 is considered one of the most dangerous known carcinogens.

Consequently, the focus of the project was now twofold: alleviate childhood malnutrition and solve the problem of aflatoxin B1 contamination.

Aflatoxin B1, Protein, and Liver Cancer

Talking to a local doctor, Campbell found that children in the Philippines were dying of liver cancer before the age of 10. This was alarming. In the U.S., people usually don’t get liver cancer until they’re at least in their 40s.

Unexpectedly, the children who got liver cancer weren’t the most malnourished. They were from the wealthiest families, the ones who could afford to eat meat. They were eating more animal protein than most children in the country.

Common medical wisdom said that animal protein prevented diseases like liver cancer. What was going on? It was when he was contemplating this question that Campbell discovered the Indian study that linked liver cancer with aflatoxin B1 and milk protein.

The research out of India involved two groups of rats. Both groups were administered the carcinogen aflatoxin, including aflatoxin B1.

Group 1 ate a diet that was 20% protein (roughly the percentage of protein in the average Western diet).

Campbell was struck by how these findings clarified his hypothesis that protein consumption in the Philippines was somehow related to childhood liver cancer.

After reading this study, Campbell started his own research to see if and how consuming protein leads to cancer caused by aflatoxin B1.

Campbell’s Research on Aflatoxin B1, Protein, and Liver Cancer

Based on the rat study in India and his observations in the Philippines, Campbell developed his own study exploring the relationship between protein and cancer in rats. The program was well-funded for 27 years by respected groups like the National Institutes of Health and the American Cancer Society.

The results both corroborated and expanded on the findings of the Indian study.

Campbell confirmed and deepened the findings of the Indian study on aflatoxin B1. He found that animal-protein consumption increased the risk of various cancers (including liver, pancreatic, and breast) at different stages of the cancer’s development when the rat was dosed with aflatoxin B1. The results remained consistent when the rats were dosed with other carcinogens, such as hepatitis B, indicating that animal proteins may open the door for multiple types of carcinogens (cancer-causing substances).

A Dietary Treatment for Aflatoxin B1?

You shouldn’t rely on your diet alone to protect you from developing cancer from carcinogens like aflatoxin B1, but reducing the amount of meat and dairy you eat may decrease your risk of developing liver cancer if you do ingest aflatoxin B1. 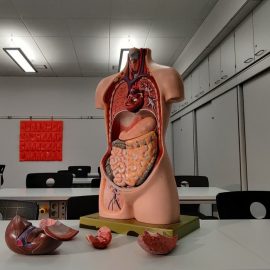