Here is a brief overview of the mass extinction timeline and the planetary effects of each extinction event.

Scientists have identified five previous mass extinction events (plus smaller disasters) over 500 million years and many believe a sixth extinction, set in motion by modern humans, is underway.

The Big Five mass extinction events of the distant past each suddenly decimated the earth’s diversity of life, the most “recent” being an asteroid that wiped out dinosaurs and other life 66 million years ago.

Here is a brief overview of the mass extinction timeline:

1) The End Ordovician period, 444 million years ago, 86% of species lost. The cause was a sudden cooling of the climate (carbon dioxide levels and temperatures dropped and things froze—glaciation) plus a huge drop in sea levels and an ocean chemistry change.

3) End Permian, 251 million years ago, 96% of species lost. This extinction seems to have been triggered by a sudden warming of the climate.

5) End Cretaceous, 66 million years ago, 76% of all species lost when an asteroid traveling at 45,000 miles an hour crashed into the Yucatan Peninsula.)

By a twist of fate, just as we’re learning more about how these five mass extinctions occurred, we’re also beginning to grasp that our species is causing the Sixth Extinction.

We—humans—began impacting the world from the start. As their population grew, modern humans spread from East Africa into new regions, undeterred by climate or geographic barriers like rivers and mountains. Humans adapted to the conditions and food supply wherever they landed—for instance, along coasts, they ate shellfish, while inland, they hunted mammals.

When we arrived in Europe, we found Neanderthals, archaic humans similar to themselves, and interbred with them before wiping them out. Then we encountered gigantic animals—huge bears, elephant-sized turtles, fifteen-foot-tall sloths—which we killed faster than they could reproduce.

They—we—rapidly multiplied and started demolishing forests to grow food and spreading animals, plants, and organisms to new continents, thus changing the face of the earth. With the discovery of fossil fuels underground, we began our greatest transformation—of the makeup of the atmosphere and the oceans. Some plants and animals have survived by migrating. But many, possibly millions, are stranded where they are unable, or lack time, to adapt. Extinction rates are skyrocketing. No other species has so drastically changed life on earth. 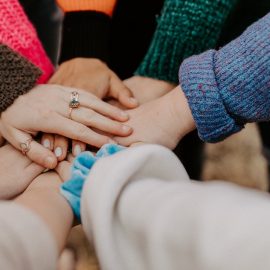