If you’re asked who the greatest CEO of the last century was, one name might naturally come to mind: Jack Welch. Sure, he achieved great financial return and is trumpeted by the press. But is Jack Welch really the greatest CEO of the century? According to the author of The Outsiders, no—not even close. There are CEOs who performed better during worse economic periods. 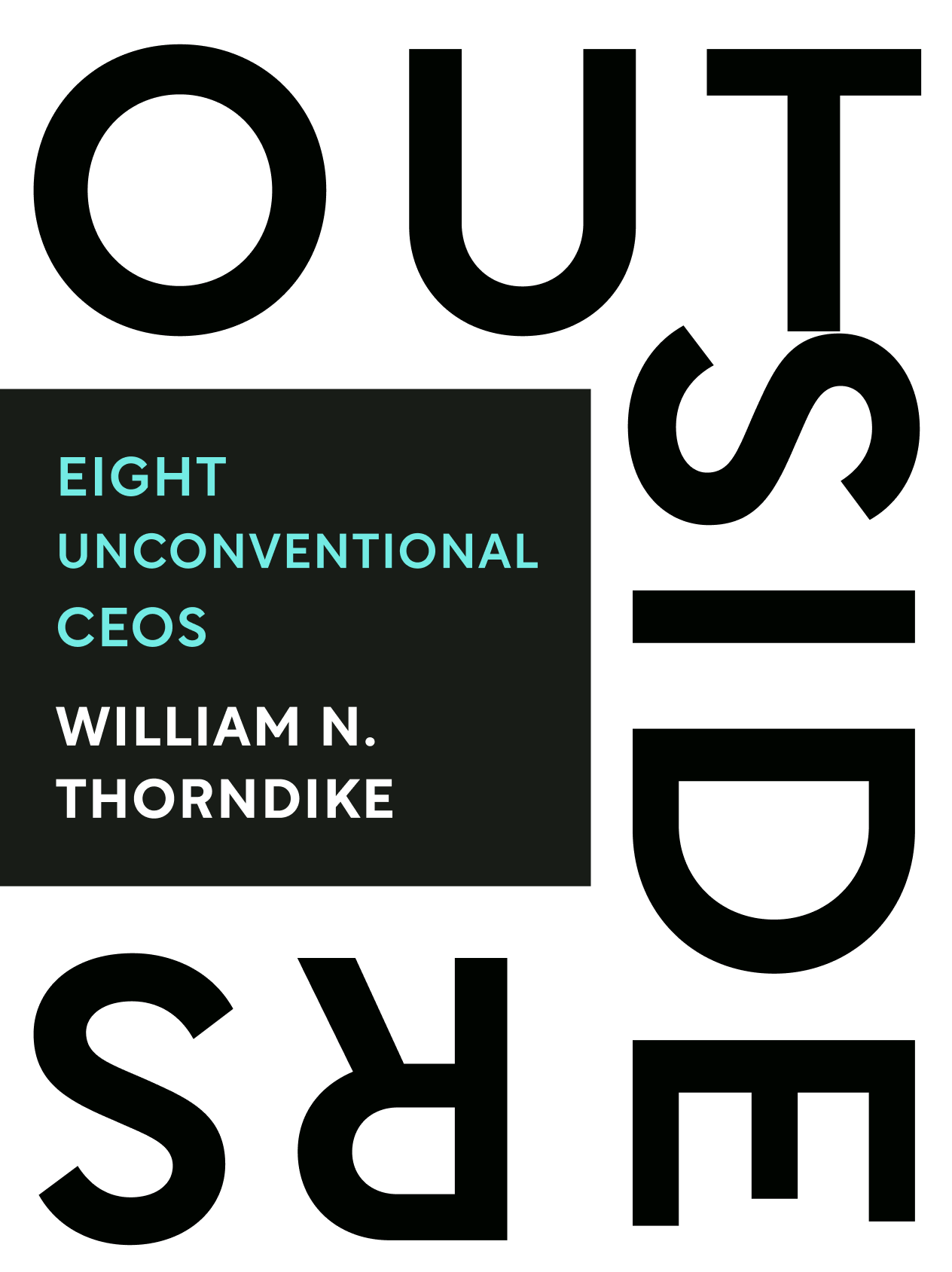 This is a preview of the Shortform book summary of guide to
The Outsiders: Eight Unconventional CEOs by William N. Thorndike.
Read Full SummaryRead Summary + Analysis

The author found uncannily strong patterns among the outsider CEOs that distinguished them from typical CEOs. This concerned three areas:

In all three areas, outsider CEOs departed from common wisdom about how to operate a company and behave as a CEO.

This departure from conventional thinking makes logical sense. By doing the same things as everyone else, you’re restricted to average performance. You need to do unorthodox things to get unorthodox results.

As a baseline, businesses can deploy cash in five basic ways—invest in the existing business, acquire other businesses, pay dividends to shareholders, pay down debt, or buy back stock. They can also raise money by issuing debt or raising equity. These are all tools in capital allocation, and the specific usage of these tools determines a company’s performance.

How to decide between these options? Universally, outsider CEOs were rational—they calculated the return on each investment project, then made the most profitable choice. They ignored conventional wisdom and what their peers were doing.

In contrast, typical CEOs issued shares to fund costly acquisitions, preferred not to buy back stock or raise debt, and paid dividends frequently. In the conglomerate era, they aggressively acquired companies believing they could improve profits through scale or synergies; this was often a mirage that never materialized. All these activities tend to result in lower performance by the author’s favorite metric—price-per-share.

Note that the optimal choices vary from company to company, from industry to industry, and between different time periods. The point is not to blindly mirror what the outsider CEOs did—it’s to examine all of the tools in your toolkit, and choose the best one based on rational analysis.

Beyond capital allocation decisions, the outsider CEOs ran their businesses in unorthodox ways.

Here's a preview of the rest of Shortform's The Outsiders: Eight Unconventional CEOs summary:guide:

If you’re asked who the greatest CEO of the last century was, one name might naturally come to mind: Jack Welch. During his 20-year tenure as CEO of GE from 1981 to 2001, GE stock had a compounded annual return of 20.9 percent. $1 invested in GE stock in 1981 would have turned into $48 20 years later.

As a result, Jack Welch has been lionized as the classical power-CEO. He was a famously active manager, diving deep into business units and traveling among GE’s locations. He communicated regularly with Wall Street and focused intently on managing GE’s stock price. He earned a public persona as a charismatic high-performance manager, gracing the covers of business magazines and authoring management books like Winning.

But is Jack Welch really the greatest CEO of the century? According to the author of The Outsiders, no—not even close.

There are two common issues with assessing the performance of CEOs like Jack Welch:

In 1966, the market capitalization of Capital Cities was 6% that of CBS, the dominant media business in the country.

By 1996, when Capital Cities sold to Disney, it had rocketed past CBS and was now worth three times as much as CBS. It had acquired media giant ABC, which was dubbed by the press as akin to a “minnow swallowing a whale.” Relative to CBS, Capital Cities had grown nearly 50 times as much in the same period.

$1 invested at the beginning would have been worth...

Teledyne is an industrial conglomerate founded in 1960, currently involved in businesses ranging from aerospace electronics to digital imaging.

Henry Singleton was born in 1916. He attended MIT for college and received a PhD in electrical engineering. He won first place in the Putnam Math Competition and was nearly a chess grandmaster—clearly a smart guy.

After graduating, he became a research engineer at a series of aviation companies. At Litton Industries, he led a business group that grew to $80 million in revenue and became the company’s largest division.

In 1989, the Berlin Wall fell, and with it fell the US defense industry’s business model. Accustomed to selling large weapons systems such as missiles and bombers, the defense industry now found its wares obsolete amidst new national priorities. Within 6 months, the price of leading defense companies had fallen 40%.

General Dynamics was one of the worst affected companies. In 1991, it had $10 billion of revenue but negative cash flow, as well as $600 million of debt, and thus had a market capitalization of just $1...

John Malone was born in 1941 and earned bachelor’s degrees from Yale in economics and electrical engineering, as well as graduate degrees in operations research from Johns Hopkins. He worked at Bell Labs, studying financial strategies in monopoly markets. Unhappy with the bureaucratic culture at...

The Washington Post was owned by Eugene Meyer, whose daughter was Katharine Graham. Her husband, Philip Graham, was hired by Meyer to lead the Washington Post from 1946 to 1963. However, Philip committed suicide in 1963, and Katharine was expected to take over management.

An inexperienced executive, Katharine hadn’t worked for 20 years when she took the CEO role. But through wise decisions around both editorial and business, the help of strong executives, and a key advisor by the name of Warren Buffett, she led the Post to be the most successful newspaper company of its class.

In 1963, Katharine Graham became CEO of the Washington Post. At the time, the Post had grown to include Newsweek magazine and three TV stations. She spent a few years learning the ropes.

In 1967, she made an unconventional staffing choice—she replaced her veteran editor-in-chief with a...

Ralston Purina was a consumer packaged goods company producing commercial animal feed, consumer pet food, and human foods. When Stiritz joined as CEO in 1981, Ralston had a muddled focus (having purchased a hockey team and ski resort) and a stagnant stock price. Stiritz revitalized the company with discipline, divesting unprofitable business units and acquiring new genuinely synergistic businesses. In 2001, Ralston merged with Nestle in a transaction worth $10.4 billion.

In the 20th century, consumer packaged goods companies like Heinz and Kellogg largely moved together as a pack. They were considered stable blue-chip stocks, paying out dividends and resisting recessions. During the 1960s and 1970s, they acquired aggressively in pursuit of synergy and vertical integration, ending up in industries like restaurants and agriculture.

Ralston Purina had done the same. With its core in agricultural...

General Cinema was a movie theater company founded in 1922 by Phillip Smith, who expanded drive-in theaters throughout New England and the Midwest. When he died in 1962, his son Dick Smith took over as CEO. Dick further expanded the company’s theater locations, then diversified into unrelated businesses such as beverage bottling and retail. While diversifying acquisitions often end in failure, Smith executed them with finesse, leading to fantastic performance when the company’s divisions were sold at premium prices in the 2000s.

In 1962, when Dick Smith was 37 years old, he took over as CEO of General Cinema. He had been working in the family business after graduating from college and World War II.

Saving the best for last, the author ends with Warren Buffett’s staggering returns over the 50-plus year history of Berkshire Hathaway. Starting with buying a textile company in 1965, Buffett grew Berkshire Hathaway into one of the world’s largest companies.

Over the years, Buffett excelled in all manners of investments—in both public and private companies, with ownership of both minority and total stakes. He famously made use of insurance float to fund investments in higher-return companies, held a small basket of companies for very long periods of time, and acted aggressively when everyone else was ducking for fear.

Born in 1930 in Omaha, Nebraska, Warren Buffett was the son of a stockbroker and the grandson of a grocery store owner. His early entrepreneurial activities included paper routes and reselling soft drinks.

When he was 19, he read The Intelligent Investor by Benjamin Graham, which converted him into...

Here’s a 10-step checklist for outsiders:

We’ve covered 8 standout CEOs and their companies, mostly in the latter half of the 20th century. But how applicable are the lessons here? Are they still relevant in the modern day? And are the lessons relevant for small businesses or managers? The author argues yes to both.

The author argues the principles in this book are timeless, studying two examples: Pre-Paid Legal, and Exxon.

Growing quickly through the 1990s, its revenue flattened. Despite the lack of revenue growth, its stock price grew by 4 times. How did Pre-Paid Legal achieve this? As you might expect, the answer came in its capital allocation decisions:

Reflect on the patterns found in outsider CEOs and how they might apply to your management.

What are some of the most surprising habits of outsider CEOs that you don't do yourself or you don't see commonly done?