The world today is full of suffering and cruelty. From birth, we are trained to accept society’s rules as “the way it is,” but agreeing to these rules stops us from becoming our true selves. But there’s a different way to live. If we replace the old agreements with four simple new agreements, we can break free from the old rules and find peace and happiness. These agreements are: 1) Use your words impeccably. 2) Don’t take anything personally. 3) Don’t make assumptions. 4) Always do your best. 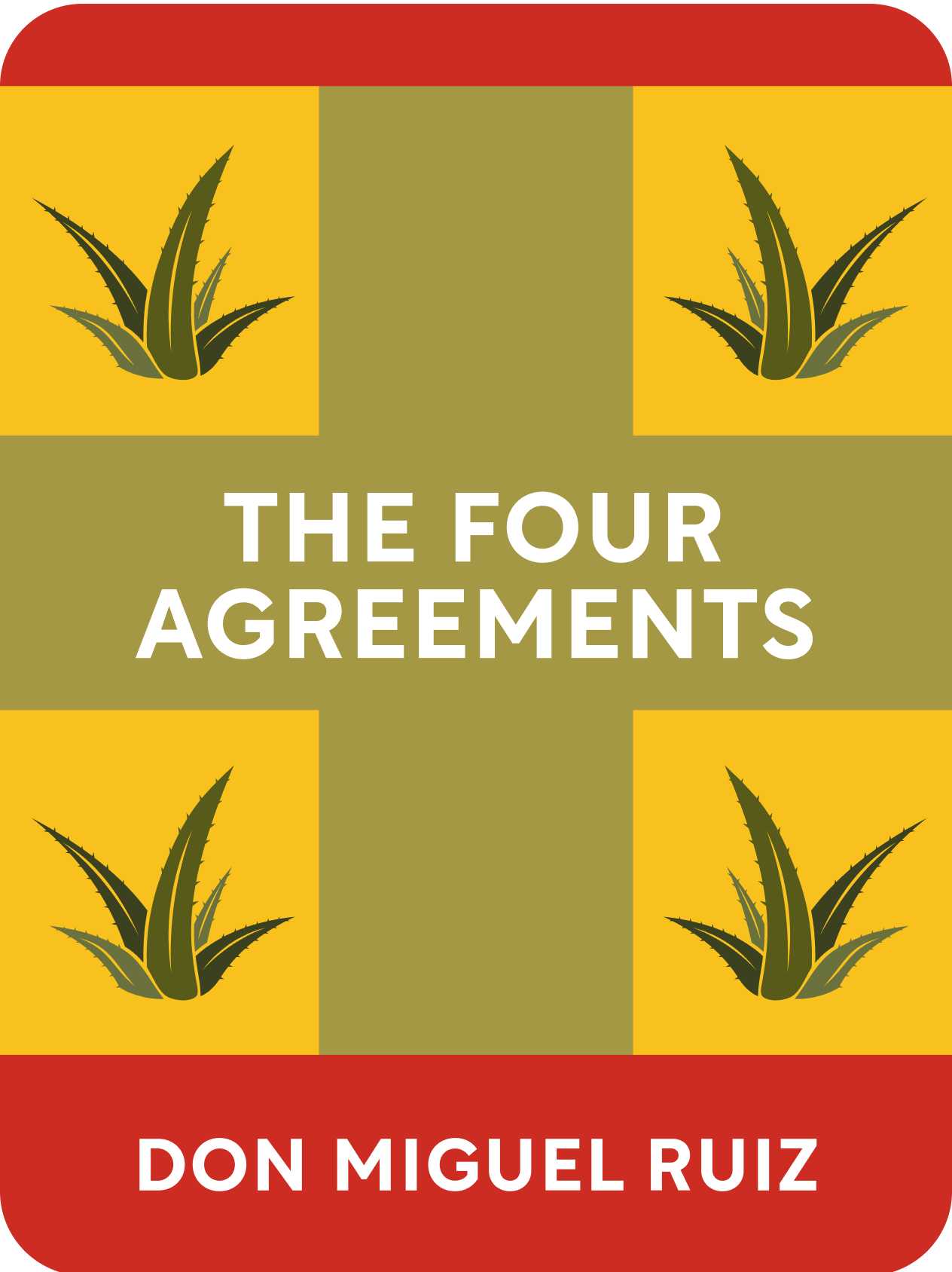 This is a preview of the Shortform book summary of
The Four Agreements by Don Miguel Ruiz.
Read Full Summary

The Domestication of Humans

The world is full of misery and suffering. We are hard on each other, but even harder on ourselves. Too many of us are unfulfilled, unhappy, joyless.

The framework of our world has been handed down to us. We were trained just like dogs. We learned how to behave, what is acceptable and not, what to believe, what’s right and wrong. None of this was taught to us by our choice. We learned a language that was not our choice. We didn’t even choose our own names. This process is called “the domestication of humans.”

We then use this belief system (that we never chose) to criticize ourselves and others. No wonder we feel powerlessly unhappy at times!

Everything we accept as “the way it is” is an agreement. But too many of these agreements hurt ourselves and others. For example, think of the teenager who starves herself to fit in. Think of someone who stays in an unhappy relationship because it’s all they know.

If we want a life of joy, we must break these harmful agreements that promote suffering and failure. But how? We feel powerless because creating and keeping all these negative agreements has sucked our personal power.

The answer is that we must change the agreements.

There are four powerful agreements that will bring back our personal power and help us break the dangerous cycle we’re in. It won’t be easy, and we’ll need a strong will to make these new agreements, but when we succeed we will transform our lives.

The First Agreement: Be Impeccable With Your Word

Following this agreement helps you become happy and at peace. As you become impeccable with your word, love replaces fear. You diminish the number of conflicts in your life.

When someone gives you negative input, it speaks more about the other person, not about you. In...

Want to learn the rest of The Four Agreements in 21 minutes?

Unlock the full book summary of The Four Agreements by signing up for Shortform .

Here's a preview of the rest of Shortform's The Four Agreements summary:

The Four Agreements is based on beliefs in Mexican indigenous (Toltec) culture.

Toltec lore has it that 3,000 years ago, a human studying to be a medicine man awoke to the soul-altering realization that he was made of light and stars, and he existed in between those stars. He called the stars the tonal and the light between the stars the nagual. He realized that life is what creates the harmony between the two. Life is the force of the Creator.

The medicine man came to some profound conclusions:

So how did humans get in such a predicament? Toltec wisdom explains how we got stuck conforming to society’s rules and stunting our true selves.

We all have individual, personal dreams. But those who came before us created a bigger dream – the “dream of the planet.” This dream created everything we see as normal in our existence: family, community, city, and the world. It encompasses laws, religion, cultures, and all of society’s rules.

Our parents are the first to teach us about this outside dream. As we grow, school, the media, churches, and other aspects of our environment hook our attention and tell us what proper behavior is.

All these rules and understandings of how the world works, everything we accept as true, is an agreement. We agree what’s good and what’s bad. We agree to a religion or a set of beliefs. We agree what constitutes proper behavior.

When we accept an agreement, we believe it...

The Four Agreements Summary Chapter 2: The First Agreement: Be Impeccable With Your Word

Words are incredibly powerful. They can be used for good or to hurt others or ourselves. In this way, we can think of them as Black Magic or White Magic.

Words are like seeds in a fertile human mind: We can plant goodness or fear.

This first agreement asks us to be “impeccable” with our words. This is the agreement on which all the other agreements rest. Abiding by this agreement alone can change your life.

So what does it mean to be impeccable with your word?

Sounds easy, doesn’t it? But being impeccable with your word is also the hardest agreement to honor. We’ve learned to do exactly the opposite.

What We’ve Been Doing Wrong

We are careless with our words far too often. We usually don’t set out to hurt someone, but we forget the power words hold. The truth is, something cruel said once in an offhand manner can have a lasting impact on someone’s life. (Similarly, something said with truth and beauty and...

Shortform Exercise: The Power of Your Words

Use these questions to reflect on how your own words can have a powerful effect on yourself and others.

What negative words do you say to yourself most? (Are you critical of your body? Your intelligence? Your success?)

Being impeccable with your words means speaking with integrity. Let’s think about how gossip fits into this.

When is a recent time you’ve gossiped about someone, or said something negative about someone behind their back? What did you say, and what motivated you to share that gossip?

The second agreement sounds deceptively simple: “Don’t take anything personally.” But so many of us are sensitive and defensive, primed to ward off the negativity the world throws at us.

But as we begin to adopt the first agreement, “Be Impeccable With Your Word,” we become happier and more at peace, more in control. When we have more internal strength, taking on this second agreement becomes easier.

These first two agreements free you from many of the bad agreements that have been disrupting your life. After all, careless words combined with highly offended people will inevitably bring drama.

No good comes from taking things personally. In fact, it’s a chain reaction of bad:

It goes on and on. Does this remind you of any arguments you’ve had in the past?

When you take things personally, you can resent it and simmer for much more time than is appropriate....

Use these questions to reflect on the damage that taking things personally can inflict on your self-esteem.

Think about a recent time when someone’s words hurt you. What was said? Why did it hurt you?

What’s the biggest assumption of all? We think everyone sees life exactly as we do. In fact, everyone sees...

Use this exercise to reflect on how assumptions can hurt you and others.

Think about a time you made a way-off-base assumption that turned out to be wrong. What was the assumption you made?

The Four Agreements Summary Chapter 5: The Fourth Agreement: Always Do Your Best

This agreement is also a simple concept, but it will allow the other three agreements to become more deeply ingrained and effective. After all, the first three agreements can truly work only if you do your best.

Doing your best frees you from guilt and shame. You feel great about yourself when you’ve given your best effort.

What Is “Your Best”?

In fact, your best can change even from moment to moment. And that’s OK.

When you’re giving your best, you’re...

Shortform Exercise: Reflect on the Idea of Doing Your Best

Use this exercise to examine why you sometimes don’t give your best effort.

Think of the last time you know you didn’t do your best. What were you trying to do, and where did you fall short?

Now we have a blueprint for how to live our lives in a better way. We know the new Four Agreements that will save us from living empty lives. We know how to transform our lives into a new experience of joy, happiness and love.

There are three ways to break with our old, bad agreements:

First, you have to be aware of the agreements you must fix.

Once we have this awareness,...

Use this exercise to identify specific steps you can take to wipe out some old agreements holding you back.

Think of a specific self-limiting, fear-based belief you think is holding your back. (You aren’t good at painting. You’re too clumsy to play a sport. You’re too old to take a challenging new job.) What’s yours?

Think of a person who has wronged you. What did this person do or say that is still sticking with you today?

It’s time to take the messages of the Four Agreements forward. You now have the beginning of a new understanding for how you can live your life: a new dream.

You have the tools to create your own version of heaven in your life, using a new set of eyes to visualize a...