Famed technology investors Marc Andreessen and Fred Wilson have cited this book as fundamental in their understanding of the tech industry. If you understand this book, you’ll have a better grasp of the 2000 tech bubble; where growth will occur in the next decade; and why explosive industries like cryptocurrency behave the way they do. You might even predict where the next technological revolution will be. 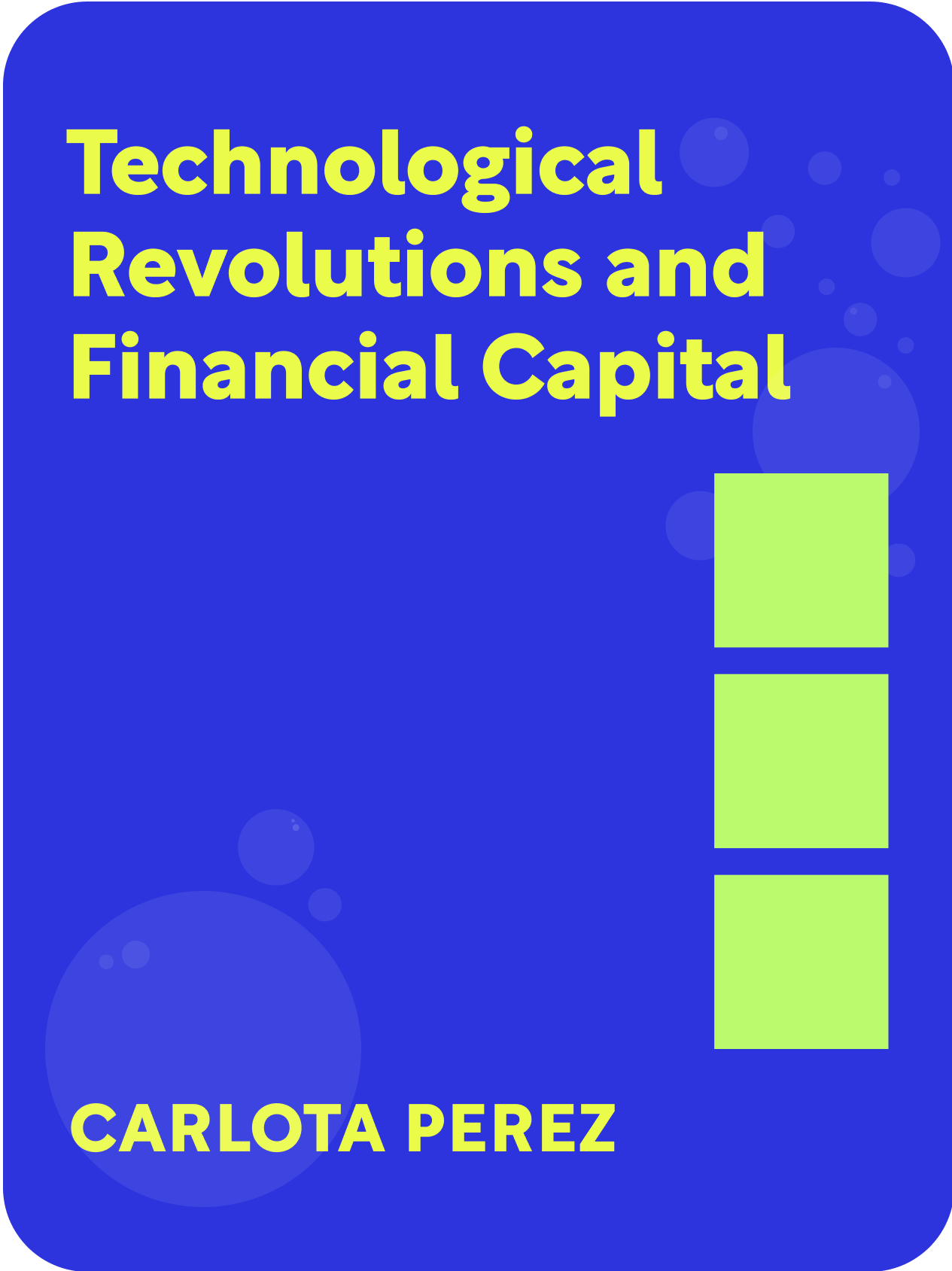 This is a preview of the Shortform book summary of
Technological Revolutions and Financial Capital by Carlota Perez.
Read Full Summary

A technological revolution is a cluster of new technologies, products, and industries causing an upheaval in the economy and propelling a long-term surge in development.

The five technological revolutions of the past 2 centuries, with their approximate start date:

Progress does not happen linearly and constantly. Instead, technological revolutions happen in predictable cycles, spanning ~50 years:

Want to learn the rest of Technological Revolutions and Financial Capital in 21 minutes?

Unlock the full book summary of Technological Revolutions and Financial Capital by signing up for Shortform .

Here's a preview of the rest of Shortform's Technological Revolutions and Financial Capital summary:

A technological revolution is a cluster of new technologies, products, and industries that causes an upheaval in the economy and propels a long-term surge in development.

These technological breakthroughs spread far beyond the industries and sectors from which they originated - they cause broad jumps in productivity for a broad span of economic activities. Economically, the technology brings a shift in price structure (often by making things significantly cheaper) that guides economic agents toward use of the new technologies. Hence Carlota Perez calls these “techno-economic paradigms.”

Even further, the technological revolution penetrates social practice, legislation, governance, and ideology. It becomes the general and shared “common sense” of the period, a new way of doing things that approaches something like the ‘ideals’ of the period. It creates new mental maps of all social actors and institutions.

There have been 5 technological revolutions in the past 2 centuries. We’ll give an overview, then dive further into how each one fits the above model:

Society shapes technological revolutions by cycling between inertia and desire for growth.

At first, society feels inertia. Each revolution is initially received as a threat to the established way of doing things in firms, institutions, and society - which have all optimized for the previous revolution. The new economy implies job losses, geographic displacement, and unaddressed regulatory challenges. The unfolding of the new revolution’s potential thus begins chaotically, causing a mismatch between the economy and socio-institutional systems.

As the technological revolution spreads through society,...

In Technological Revolutions, Carlota Perez outlines five revolutions that each upended the economy. We’ll summarize the new technologies that appeared, the infrastructures enabling the revolution, and new principles that became common wisdom.

At a high level, the four phases of each revolution look as follows:

It helps to start from the end of the previous revolution, which offers the gestational environment for new innovation.

At the dawn of the new revolution, the previous revolution has played out.

(Shortform note: irruption is defined as “a forcible and violent rushing in,” as opposed to eruption, which a rushing outward. This reflects Schumpeter’s notion of creative destruction, where the economic structure is revolutionized from within, destroying the old while creating the new.)

The big-bang event offers a visible attractor for investment, sparking the imagination of engineers and entrepreneurs. This technological breakthrough offers new cost-competitive possibilities in a sluggish landscape. This is a 0 → 1 event.

The powerful firms from the previous revolution will use the innovation as a new lease on life and become testbeds for the new technology.

The new paradigm becomes a significant force, overcoming resistance of the old paradigm.

The infrastructure begins to be laid out: suppliers, distribution channels, skilled labor, cultural adaptation. (This infrastructure is critical for the later Deployment phase.)

Financial capital takes over. Convinced it can thrive on its own, enthralled by its new magic rules for inventing a new sort of economy, it separates from production capital.

Financial capital becomes inebriated with the high levels of profit in the new industries and expects the same from all investments.

Financial capital is convinced it’s discovered a recipe for generating profits, which is then repeated over and over, without concern for fundamentals.

The irrationally exuberant bubble bursts, causing a recession and social unrest. This is the trigger for regulatory and institutional change to adapt to the new revolution.

Three tensions make the Frenzy impossible to sustain indefinitely, bringing on the recession:

Paper values are brought back in line with real values.

Humbled by the evaporation of paper gains and pressured by the victims of semi-fraudulent practices, financial capital is more willing to accept regulatory safeguards.

Using the infrastructure developed in Frenzy and the regulatory safeguards in Turning Point, the technological revolution diffuses across the whole economy. A “good feeling” sets in with increasing coherence. Business is satisfied about its positive social role. Technology, and even finance, is seen as a positive force.

Production capital is now recognized as the wealth-creating agent, with financial capital as the facilitator.

For entrepreneurs and people working in the new revolution, the path to success has been successfully signaled. People can join the bandwagon with lower risk. 1 → n growth occurs.

Finally, the technological revolution begins to deplete its possibilities. Refer to Phase 0 above. This is the twilight of the golden age, “though it shines with false splendor.”

Throughout the revolution, innovations in financial capital enable the diffusion of technology.

Carlota Perez classifies financial innovations along six types, then illustrates when innovations in each type occur.

Carlota Perez addresses a few arguments against her model of technological revolutions.

This model doesn’t perfectly apply to this and that situation.

The four phases model is deliberately meant to be impressionistic. Each revolution has unique ideological, institutional, political factors that lead to particularities, but the general shape holds true.

For instance, in the third revolution, madness in the US stock market occurred more during 1903 and 1907 during a “frenzied Synergy” in a strong drive to forge ahead.

Further, the Great Depression in the USA after 1929 lasted especially long. Perez suggests that Roosevelt’s New Deal would have erected the structure for successful synergy, but these were opposed for fear of socialism and inordinate state intervention in the economy. It took the military-industrial complex in World War II to teach how state and capitalism could coexist. (Shortform note: others argue that artificial wage floors suppressed employment and output, or that insufficient fiscal stimulus was applied.)

This model should show up in economic analysis and in...

Knowing the concepts, consider where we are now.

Which of the four phases are we in now?