Book SummarySam Walton: Made in America, by Sam Walton

Wal-Mart is the largest retailer on the planet, exceeding $500 billion in sales and 12,000 stores worldwide. This retail titan began in 1945 with founder Sam Walton managing a single store in Newport, AR, a town of 7,000 people. In this small town, Walton learned the retail and management strategies that became the foundation of Wal-Mart’s staggering worldwide growth.

Sam Walton wrote his autobiography Made in America in the last year before he died, as he struggled with cancer. This book is a candid, energetic retelling of the Wal-Mart story and the principles that led Walton and his partners to incredible success. Learn what Wal-Mart did in its early life that every major competitor ignored, and how Sam Walton his competitors' best ideas—and did them better. 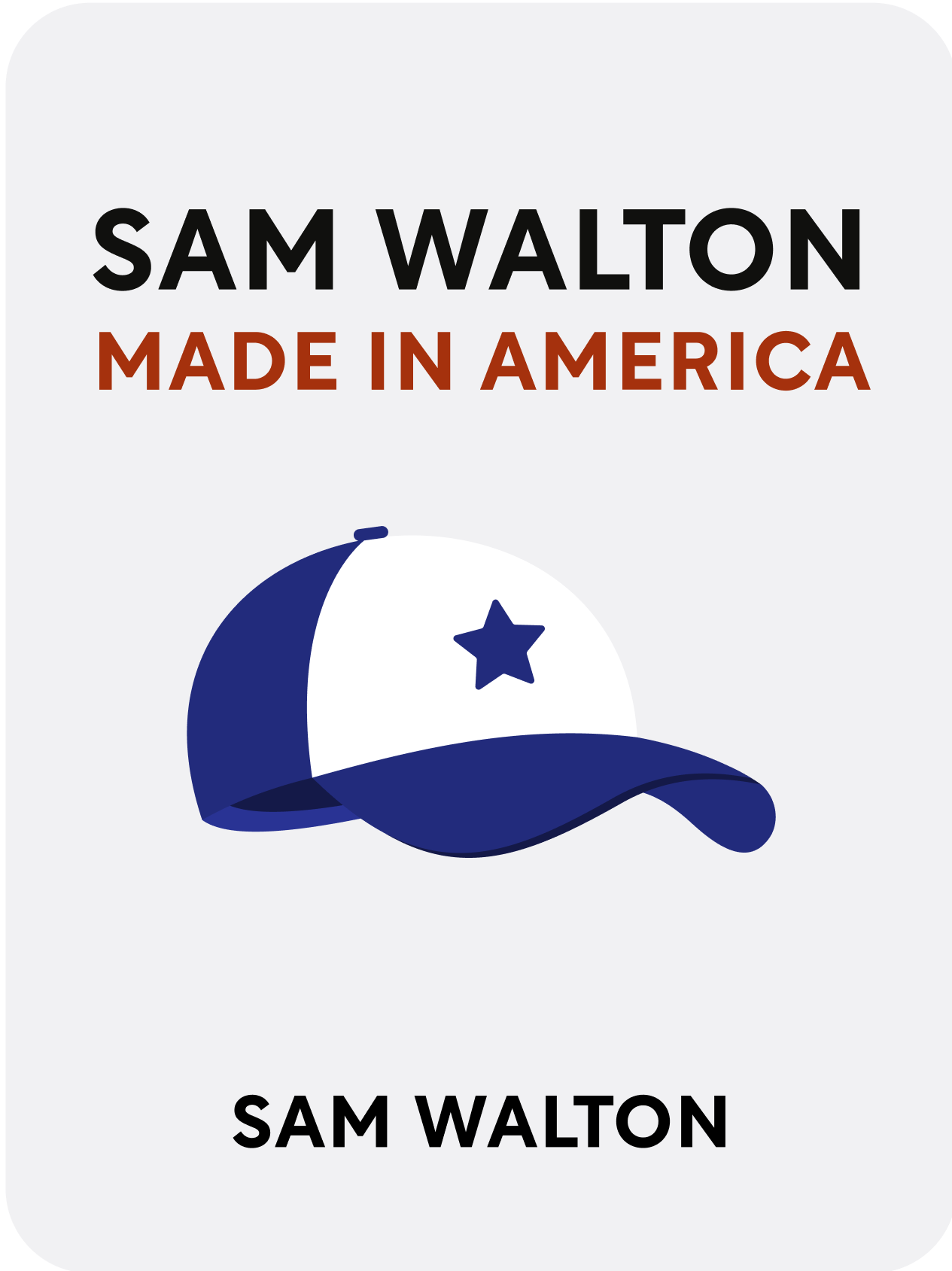 This is a preview of the Shortform book summary of

1-Page Summary1-Page Book Summary of Sam Walton: Made in America

Made in America was published in 1992, the same year that Sam Walton died at the age of 74. In this autobiography, Walton covers his life and the history of Wal-Mart, as well as the key strategies and management principles that led them to overwhelming success.

Sam Walton began his retail career in 1945 by buying a variety store in Arkansas. The variety store (also known as a “five and dime” store) was a type of retail store that offered a wide range of inexpensive household goods. This was his training ground in retail, where he learned how to compete with nearby stores. Importantly, he learned these sales principles:

After 5 years, his lease expired, and he was forced to sell the store to the landlord. He chose to start over in Bentonville, another Arkansas town. Over a decade, he built up to 15 variety stores across three states.

At this point, Walton was already successful, but he sensed two threats (and potential opportunities):

The first Wal-Mart discount store opened in 1962. By 1968, they had 13 Wal-Marts and added on more warehouses.

Critical to Wal-Mart’s success, Walton believed the large retail companies (such as Woolworth) underestimated the opportunity available in small towns. Competitors specialized in metropolitan areas, servicing large populations. Instead, Walton felt that there were thousands of small towns like Bentonville that were being ignored. If Walton’s stores could offer superior pricing and selection locally, he knew customers would prefer to shop there instead of driving into the city.

In 1970, Wal-Mart went public to pay off its debts. Over the next decade, they doubled every 2 years, from 32 stores and $31 million in sales in 1970, to 276 stores and $1.2 billion in 1980, and even more growth up to 1990. For most of Wal-Mart’s life, it has been a literal straight shot up and to the right, replicating its strategy over and over again in towns around the United States, and then the world.

Wal-Mart was judicious about where to open up stores, and it avoided direct competition with other major discount stores for years....

Want to learn the rest of Sam Walton: Made in America in 21 minutes?

Unlock the full book summary of Sam Walton: Made in America by signing up for Shortform .

READ FULL SUMMARY OF SAM WALTON: MADE IN AMERICA

Here's a preview of the rest of Shortform's Sam Walton: Made in America summary:

Sam Walton: Made in America Summary Brief Biography of Sam Walton and Wal-Mart

(Shortform note: Published in 1992, Made in America covers the history of Wal-Mart, from a single store in Arkansas to a worldwide retail titan. The book is written chronologically as a narrative, with Walton reflecting on his management and life principles throughout.

To create a more useful summary, we’ve reorganized to group all the main themes together, with examples from the narrative. We’ll start here with a brief biography, then dive into the management techniques that made Wal-Mart the giant it is today.)

Sam Walton was born in Oklahoma in 1918 and moved to Missouri with his parents. He credited his dad for being a hard worker with high integrity and a great negotiator, and his mother for ambition and drive.

Sam notes that his parents argued a lot, and they split up after he grew up. He felt like he “took a lot of the brunt of this domestic discord,” and this possibly motivated him to stay busy all the time.

Walton was competitive throughout his early life: “It never occurred to me that I might lose...almost as if I had a right to win.” He led his high school football and basketball teams to championships, and he became president...

Sam Walton: Made in America Summary The #1 Principle of Wal-Mart: Customer Focus

Sam Walton believed that his company existed to serve the customer. Wal-Mart’s mission was to lower the cost of living for millions of people around the world.

Any retailer that doesn’t provide this is failing its customers. Any business that does this better is improving the customers’ lives.

In his autobiography, Sam Walton demonstrates the character traits that enabled him to build Wal-Mart into a titan. Here are the major themes:

Walton noted: “If I had to single out one element in my life that has made a difference, it would be a passion to compete.” His brother Bud Walton noted, “He knew he was going to win. It’s just the makeup of the man.”

Walton was competitive even in early childhood:

In Made in America, Walton shares the key strategies that made Wal-Mart successful in retail.

Wal-Mart was judicious about where to open up stores.

See how you align with some of Wal-Mart’s most important values.

Sam Walton unfailingly worked in service of the customer. Imagine that in your work, you care only about the customer outcome and will fight on their behalf. When you’re doing something difficult, you are doing it for the customer. How would you behave differently if you took this to heart?

Walton managed people with a trusting, light-hearted attitude. Even when Wal-Mart had 5,000 stores, he wanted it to feel like when they had 5 stores.

Walton’s management can be summarized in one line: “Pick good people and give them maximum authority and responsibility.”

Walton preferred hiring ambitious, entrepreneurial people. Even if someone seemed too inexperienced or lacked knowledge right then, they were recognized for their potential if they had the desire to work hard.

Walton gave people autonomy. Wal-Mart locations operated as a “store within a store”—within a single store, each department had a manager who essentially operated her own business. They were given financials, such as cost of goods sold, margins, and expenses, and their performance was ranked against all other stores in the company. They were then given incentives to win.

Walton believed positive feedback was important. He actively looked for things to praise and let people know how important they were. People want to feel appreciated for their performance.

Take up some of Sam Walton’s most important management techniques.

Walton had a “whistle while you work” philosophy, and he wanted people to have a good time working. Do you take yourself too seriously at work? How could you lighten up your perspective?