Meditations, by Roman emperor Marcus Aurelius, is one of the definitive texts on Stoicism. In Meditations, Aurelius shares his thoughts about the importance of logic over emotion and helps you to start training your mind to think rationally. By following Stoic teachings, you can live with purpose and die with dignity. 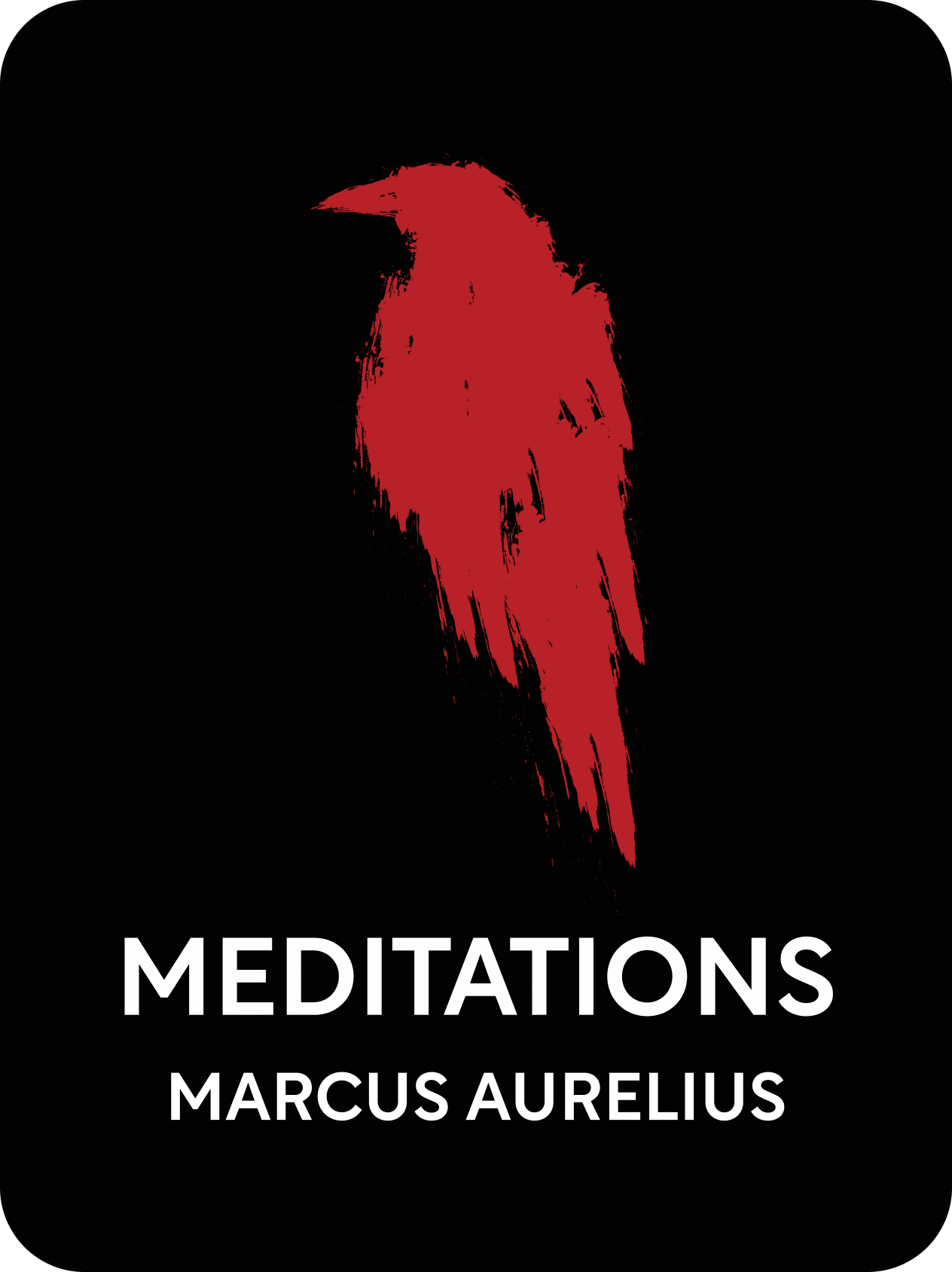 This is a preview of the Shortform book summary of

Many scholars consider Meditations, written by the Roman emperor Marcus Aurelius, to be one of the definitive Stoic texts. Stoicism is a philosophy that originated in ancient Greece—its central idea is that rational thinking can guide you through any hardship and allow you to endure any pain.

Meditations covers a wide range of topics, but there are a few key points that it continually returns to and builds upon:

Logos is the force that guides the universe. It ensures that every occurrence is the right one, as surely as if a scientist had measured every outcome and chosen the best possibility. Therefore, you should always act according to logos. This one belief is the heart of Stoicism.

Nature also follows logos. (In fact, it has to, because it lacks humans’ ability to go against logos.) Therefore, whatever happens in the natural world must be the best possible thing that could happen. Logos ensures that you live on a healthy planet and that living creatures as a whole enjoy health and prosperity.

In spite of that, individual beings often suffer. This is because every organism exists to serve others, not to prevent its own suffering. Lower creatures exist for the benefit of higher ones; for example, plants are eaten by prey animals, which in turn are eaten by predators. Meanwhile, higher creatures (like ourselves) exist to support one another. Always remember that everything in the world is connected, just like those connections between different creatures. All things exist in harmony with one another, and because of one another.

With all of the above facts in mind, accept that everything that happens to you is ordered by logos. Consider each event—even events that seem negative, like illness or injury—as being prescribed by nature. Such events are no different from treatments prescribed by a doctor, so complaining about your own misfortunes hurts you just like refusing to take your medicine would.

See Things as They Are

You should always see things as they are: For example, a feast laid before you is nothing but dead plants and animals. Rich purple robes are simply sheep wool colored with shellfish blood. Making love is just rubbing organs together.

Likewise, as in the previous examples, you should always be able to identify and define whatever you encounter. Your observations should be reasonable and accurate, not based on emotional reactions or illogical superstitions. Furthermore, you should know what parts go into making the thing, what its purpose is, and how you should deal with it (or if you even need to).

Finally, you should know what gave rise to the thing or situation: for example, the will of the gods, random chance, or the actions of another person. In other words, before you respond to any thing or situation, you should make certain that you understand it clearly. You should always proceed with logic, not emotion.

When you observe things, always stop at your first impressions. For example, if a loved one is sick, that’s all you need to consider—there’s no reason to fret that he or she might die from the disease. If you simply accept events for what they are, rather than trying to figure out what they might mean, then you'll be at peace.

You should also appreciate the things that you have, but only for what they are; don’t overvalue them. In other words, you shouldn’t be so attached to your possessions that you're afraid to lose them.

You have access to Judgment and Adaptability. No matter what situation you might find yourself in, Judgment can see the truth of the matter. Then, Adaptability can figure out how best to make use of the situation. This is the essence of rationality.

Artistic works like music, paintings, dances, and so on can cause you to temporarily lose control of your reason and rationality. However, there’s a simple technique that can prevent you from being swept away by such things: You can study each individual note of a song, or motion of a dance, or the smallest part of a painting you can observe. Then, for each tiny part, ask yourself whether that has any power over you—you’ll find that it doesn’t.

You can also apply that same technique to life as a whole. Looking at your entire lifetime might seem overwhelming, but what power does any single moment have over you?

Recognize That Outside Forces Can’t Hurt You

You can endure any long-term pain, whether physical or emotional—unendurable pain, by definition, quickly ends itself.

Similarly, if you don’t feel hurt, then you haven’t been hurt. Therefore, emotions like anger and grief are more harmful to you than whatever provoked them. If you decide to not be harmed, you won’t be harmed.

For that reason, the thoughts and actions of other people can’t harm you, either. In other words, what others do doesn’t upset you—your perception of what others do upsets you.

That’s not to say that people won’t try to hurt you. They might even try to stop you from pursuing logos,...

Want to learn the rest of Meditations in 21 minutes?

Unlock the full book summary of Meditations by signing up for Shortform .

Here's a preview of the rest of Shortform's Meditations summary:

Many scholars consider Meditations, written by the Roman emperor Marcus Aurelius, to be one of the definitive Stoic texts. Stoicism is a philosophy that originated in ancient Greece—its central idea is that rational thinking can guide you through any hardship and allow you to endure any pain.

Meditations covers a wide range of topics, but there are a few key points that it continually returns to and builds upon:

The first book of Meditations is devoted to important lessons that Aurelius learned from people in his life. These lessons are the foundation for...

Now that we’ve covered Aurelius’s dedications, in Books 2-3 we’ll begin introducing some key concepts of Stoicism. We'll start by discussing how to observe every object and event clearly and logically, without being distracted by popular beliefs about those things or the false importance that people create around them.

Then, we'll take our first look at the topic of death. Facing death calmly and with dignity is a key aspect of Stoicism and is a subject that we'll return to several times throughout Meditations. For now, though, we'll simply discuss how mortality can be motivational, rather than frightening.

See Things as They Are

You should always be able to identify and define whatever you encounter—every object, person, and situation. Your definitions should be reasonable and accurate, not based on emotional reactions or illogical superstitions.

Books 4-6 of Meditations reinforce some important concepts that we covered in the previous sections and introduce several new concepts. First, we’ll discuss the importance of remembering logos. Next, we’ll consider our duties in life; duties that arise from logos.

In this section, we’ll also discuss how to avoid suffering using rationality. In short, we do this by observing the things that we think are hurting us and realizing that they’re not actually dangerous.

Finally, we’ll apply that same concept of avoiding suffering through rationality to interactions with other people. We can meet any insult or annoyance with patience and kindness, simply by recognizing that what others think and do isn’t dangerous to us—in other words, it isn’t our problem.

By following all of these guidelines, we can find peace in life—a concept we’ll discuss at the end of this section.

Logos ensures that every occurrence is the right one, as surely as if someone had measured every outcome and chosen the best possibility. Therefore, you should always act according to logos.

Nature also follows logos. (In fact, it has to, because it lacks humans’...

In this section of the summary, we'll further discuss how you should relate to other people and how you should treat yourself. In short, you should be patient with others and strict with yourself. You must constantly focus on self-improvement, with emphasis on the self.

Remember that what others do is neither your problem nor your responsibility. Each of us is only responsible for our moment-to-moment thoughts and actions.

Being strict with yourself and patient with others will keep your mind clear and peaceful and allow you to live a good life. We’ll discuss living well at the close of this section.

Be Strict With Yourself

There’s a lot of meaningless activity in the world. You can see it in everything from people marching in parades, to the frenzied action when you throw a bit of food into a fish tank. You're surrounded by this pointless energy, and you must accept it without judgment. At the same time, you must also remember that your own value is determined by what you use your energy for. Thus, you must be strict with yourself and how you behave.

You always have the option to humbly accept what happens, to treat each person as he or she should be...

Developing compassion for people who have wronged you is a difficult, but important task. Take a moment to think about someone you currently dislike and consider how you can feel compassion for them. While answering the questions, remember that the only things that can really hurt you are those that damage either your character or your community.

Describe someone who you dislike. Why do you dislike him or her? What has this person said or done that’s truly hurt you?

In this final section of Meditations, we’ll tie together the various concepts we've been discussing. We’ll discuss how you can use reason—logos—to hone your mind and control your thoughts. When your mind is strictly controlled, you'll never suffer from anxiety nor anger.

Then, we'll discuss how, through rational thought, you can develop a sense of perspective. Seeing yourself as a tiny part of an infinite universe helps you realize how insignificant you really are and therefore how important it is that you work toward the common good instead of your own selfish ends.

Finally, we'll return to the topic of death one last time. With your mind honed and calmed by Stoicism, you can face the end of life with dignity and grace.

Cultivate a Strong and Healthy Mind

A healthy mind is like a perfect sphere in perfect stillness. It doesn’t reach outward or retreat inward; instead, it simply exists and observes. By focusing only on your own thoughts, and only on the present moment, you can shape yourself into that sphere.

There are several characteristics of a strong and healthy mind, and you should always strive to uphold them:

All of the goals of Stoicism begin with developing a strong, logical mind. To that end, try out one of Aurelius’s recommended exercises for training the mind to be logical.

Begin by choosing one thing you can see (this could be an object or a living thing.) Describe what you’ve chosen to observe.