Like most people, you’re probably easily distracted by wandering thoughts or social media updates while trying to be productive. In Deep Work, Cal Newport teaches you how to develop your focus and resist distractions so that you can rise to the top of your field and drive toward your most important goals. He contends that focus is like a mental muscle: Through deliberate training, you can strengthen your focus and expand your mental capacity.

Newport explains why the ability to do deep work (work that requires intense concentration) is so important in our modern economy, and he shows how to make deep work a part of your life. In addition to exploring Newport’s ideas on how to eliminate distractions, this guide adds advice from other authors on how to work despite present distractions. We also include practical ways that everyday knowledge workers, not just academics like Newport, can prioritize deep work. 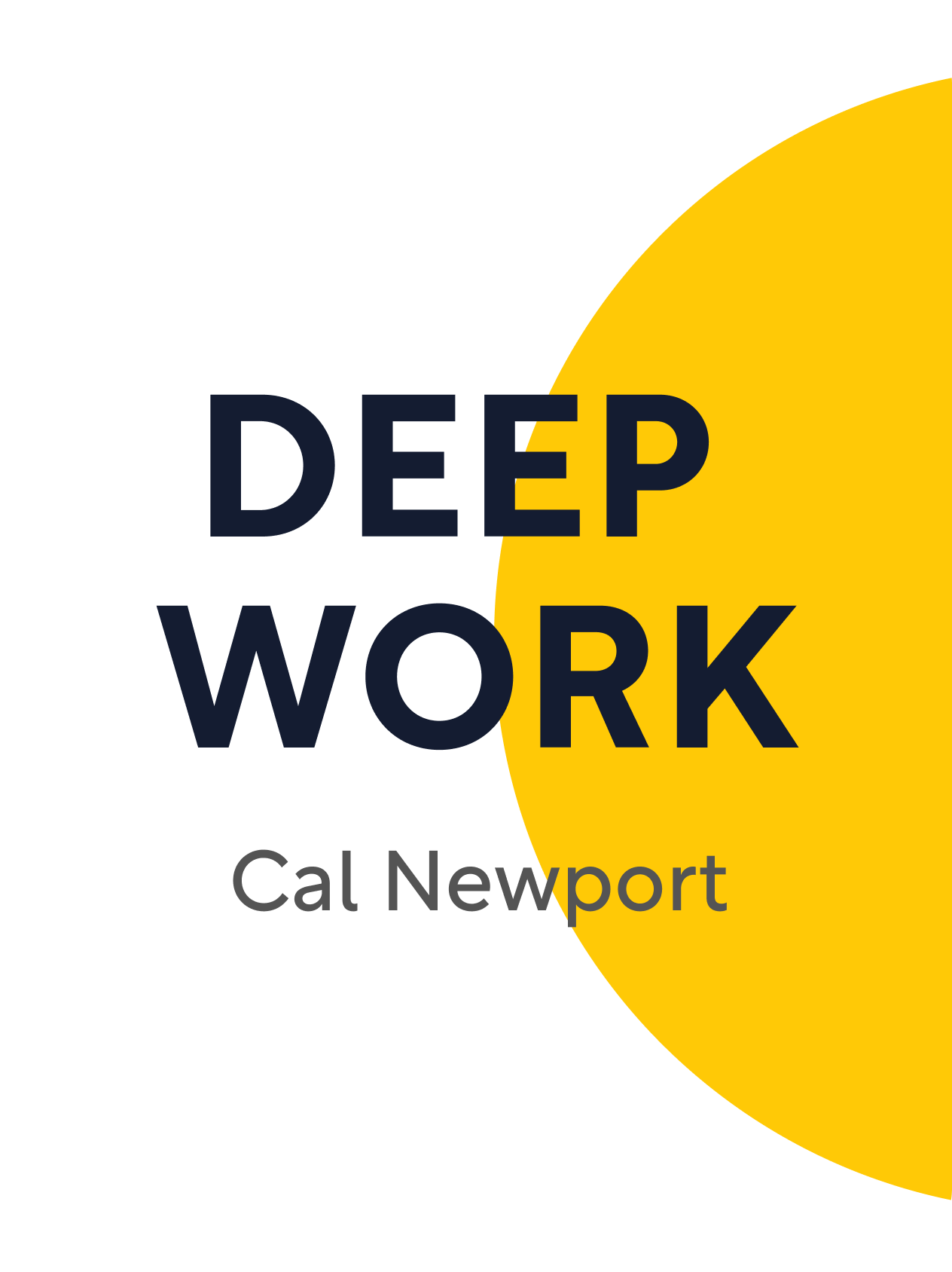 This is a preview of the Shortform book summary of guide to
Deep Work by Cal Newport.
Read Full SummaryRead Summary + Analysis

Cal Newport defines “deep work” as focused, uninterrupted, undistracted work on a task that pushes your cognitive abilities to their limit. In contrast, “shallow work” describes tasks that aren’t as cognitively demanding—like answering emails and attending unproductive meetings. These tasks don’t create much value and anyone can do them.

(Shortform note: Some of Newport’s contemporaries refer to deep work and shallow work as reflective work and reactive work. However, regarding some tasks, the boundary between “reflective” and “reactive” can be confusing. For example, you may think that because emails require you to reflect on an adequate response, they count as reflective work—though they’re shallow work, by Newport’s definition.)

Over the past decades, the economy has moved away from brute force labor to analyzing and applying information. Newport explains that skills that succeed in the modern economy—like complex problem solving, data analysis, and computer programming—require deep work to learn and execute. He argues that your ability to do deep work will determine how much you thrive in the information economy. Ironically, the same technologies that built the information economy are depleting our ability to do deep work. Phones, emails, and addictive apps pull us away every few minutes. Thus, at a time when deep work is most important, it’s also most difficult.

(Shortform note: These ideas aren’t new—Peter Drucker’s The Effective Executive, published in 1966, discusses the rising “knowledge economy.” Drucker’s best practices for standing out in the knowledge economy align closely with several deep work practices we’ll explore later in this guide, such as cutting out time-wasting activities, scheduling tasks into uninterrupted blocks of time, and focusing on one task at a time.)

This guide is divided into two parts. First, we’ll cover the three foundational ideas of deep work and learn about its benefits. Then, we’ll explore practices that will help you create a supportive environment for engaging in deep work.

Newport argues that deep work allows you to do two things critical to your performance in the information economy:

Newport explains that deep work is difficult because our world bombards us with near-constant distractions. He outlines three major ways that modern workplaces derail knowledge workers’ ability to engage in deep work.

Shallow work is deceptively bad because it feels productive and...

Here's a preview of the rest of Shortform's Deep Work summary:guide:

“Deep work”—totally focused, undistracted work—is the way to thrive in today’s information economy, explains professor Cal Newport in Deep Work. His method of blocking off chunks of time to focus intensely on a single task strengthens your ability to learn difficult things quickly and optimize your output—both of which are key skills for knowledge workers, or those who work with information. He explains why deep work is so valuable and then helps you design your life to allow more time for deep work.

Cal Newport is a professor of computer science at Georgetown University. He’s published eight books. His first three books focus on advice for students: How to Win at College, How to Become a Straight-A Student, and How to Be a High School Superstar. In 2007, in tandem with his work on these books, he started his popular blog, _[Study...

Cal Newport defines “deep work” as focused, uninterrupted, undistracted work on a task that pushes your cognitive abilities to their limit.

In contrast, “shallow work” describes tasks that aren’t cognitively demanding—like answering emails, filling out paperwork, and attending unproductive meetings. These tasks don’t create much value and anyone can do them.

(Shortform note: Newport discusses an early iteration of deep work and its transformational effect in his book So Good They Can’t Ignore You. He says that many people, when looking for work, make the mistake of looking for a job they love. While this may feel good in the short term, it won’t pan out into a career you love in the long term. He says that what really sets you apart and guarantees success is developing scarce, prized skills—which he calls “career capital”—that let you choose among scarce, prized careers. In Deep Work, he expands on this idea by...

Think about what deep work means for you.

In your line of work, what are your most important deep work tasks? These are the tasks that most advance you toward your goals and can be transformational. List each task, and why each one is important.

Newport outlines three foundational ideas to keep in mind as you learn to commit yourself to deep work:

Idea #1: Why Deep Work Is Important

Newport says that in our current information economy, those who have the ability to master technology and solve complex problems are the most valuable types of people. He argues that deep work allows you to do two things critical to your performance in this economy:

1. Learn and master new skills: Today’s economy changes so quickly that a technology or best practice that was hot five years ago might be obsolete today. Newport notes that this is true of fields as wide-ranging as computer programming, marketing, academic research, and financial investments. He explains that, to stay relevant over decades, you must continue to learn challenging new skills—which requires focused concentration.

(Shortform note: Experts have pinpointed several actions that usually lead to skill mastery: First, determine if your goal is attainable and...

After establishing what deep work is and why it’s important in Part 1, Newport moves on to explain different ways to make deep work practices part of your life. The first step he outlines is carving out time that you’ll dedicate to deep work. He warns that it’s very difficult to simply will yourself to do deep work on demand. It’s much more effective to approach deep work with structure, habit, and discipline—in other words, to make deep work a practiced ritual.

Ritualizing deep work is important because, without a ritual’s structure, distractions quickly get in the way. According to Newport, distractions are anything that you’d rather be doing than deep work—such as scrolling social media, taking a nap, or hanging out with friends. You use willpower to overcome these distractions and get back on task. Newport argues that you have a finite amount of willpower each day. If you have to continuously force yourself to switch from distractions back to deep work, you’ll deplete your willpower and more easily give in to distraction. This limits you from reaching the maximum of your deep work potential.

The Debate Around “Willpower Depletion”

Deep work doesn’t just happen—you need to make time for it in your schedule.

Think about your goals. To achieve them, how much of your day should be dedicated to deep work tasks? (For example, you may only be spending one hour per day in deep work, but should be spending at least two hours.)

In addition to scheduling time for deep work, Newport encourages you to build an environment that supports deep work by reducing distraction triggers.

There are several ways that you can create an environment that lends itself to undistracted focus:

Newport says you should choose a place that you go to only for deep work (like a conference room, the library, or an office in your home)—you won’t do any shallow work in this place. Save it for another place dedicated only to shallow work. Compartmentalizing your location this way will cement the habit of deep work more strongly.

Once you have a location for your deep work, Newport urges you to add support in ways that allow for more focused deep work—like starting with coffee, having enough food, and integrating light exercise into your routine.

Shortform Exercise: Reflect on Your Distractions

Try to align where you spend your time with your life’s most important goals.

What is one of your most important goals? It can be professional or personal. (Choose just one. You can redo this exercise for other goals.)

As we said earlier, most beginners can only do about an hour of deep work at a time, but you can train your brain to focus for longer and longer stretches of time. Newport offers several techniques for this.

Newport points out that most people, in idle moments like waiting in line or waiting for the oven to preheat, reflexively pull out their phones for a quick scroll through social media or their texts. He points out that by always filling in these low-stimuli moments with a high-stimuli activity, you deplete your brain’s ability to tolerate boredom.

Even if you set aside time for deep work, you won’t be able to do the work during that time unless you strengthen your brain’s “focus muscles.” Newport suggests consciously letting yourself be bored in these low-stimuli moments.

Over time, your brain will be able to go for longer periods of time without seeking high-stimulus activities like scrolling the Internet or looking at your phone.

Shortform Exercise: Reflect on Your Feelings of Distraction

A helpful practice in training your brain to focus is paying attention to what internal triggers are driving you to distraction.

What are the feelings that usually precede a distracted behavior? (For example, you experience feelings of anxiety, boredom, or anger.)

Once you have the schedule and the environment, you must actually do deep work. Newport offers several suggestions to make the most of your focused time and environment.

The 4 Disciplines of Execution

Newport outlines four principles of deep work that come from the book The 4 Disciplines of Execution. During deep work sessions, use these principles to optimize your time and focus on the right things.

When choosing what to work on, figure out what things have the largest impact. Then, instead of trying to say no to trivial distractions, simply say yes to the most important task or goal. This process helps crowd out shallow tasks that don’t support your goals.

Newport recommends choosing only a small number of such goals so that you only have to focus on keeping trivial tasks out rather than maintaining a large list of things to accomplish.