Want to motivate your employees and teammates to do a better job? Does your team seem unhappy, unmotivated, and distrustful of your organization?

In Carrots and Sticks Don’t Work, Paul Marciano argues that engagement stems from respect. Employees don’t want to be treated like cogs in a chain. Instead, they want to feel empowered, have autonomy, receive supportive feedback, and be treated considerately. Learn what components of work people really want, and simple actions to take today to engage your team. 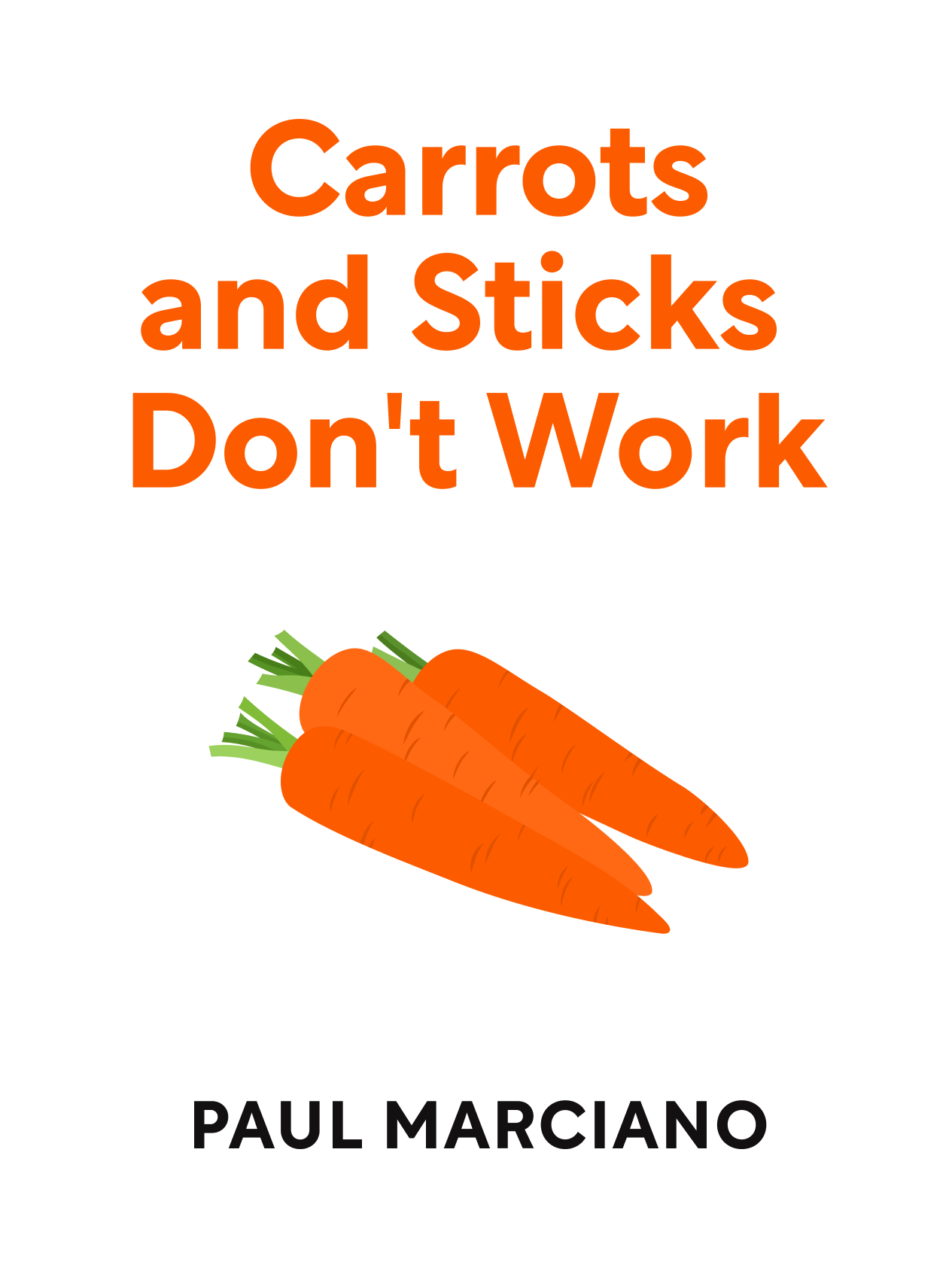 This is a preview of the Shortform book summary of
Carrots and Sticks Don't Work by Paul Marciano.
Read Full Summary

Carrots and Sticks Don’t Work decries motivation based around financial incentives, considering these programs brittle and temporary. Instead, author Marciano suggests that people are most motivated when they feel respected by their organization and feel respect for their work. This leads to a model called RESPECT:

The full summary contains a wealth of actionables for each of these seven components. Here are some of the most notable recommendations:

Want to learn the rest of Carrots and Sticks Don't Work in 21 minutes?

Unlock the full book summary of Carrots and Sticks Don't Work by signing up for Shortform .

Here's a preview of the rest of Shortform's Carrots and Sticks Don't Work summary:

After graduating from his PhD program in Clinical Psychology, the author had a terrible experience at his first job. People didn’t care about him on his first day; no one seemed engaged at work; his bosses gave unclear expectations of...

Marciano distinguishes between motivation and engagement. In his semantics, motivation refers to short-lived, brittle energy influenced by external factors. Remove the factors, and the employee stops working. Motivational energy tends to burn brightly and briefly without leading to permanent habits.

Engagement is an intrinsic, deep-rooted commitment to the job, organization, team, manager, and customer. Engaged employees work hard for the sake of the organization and because they feel fulfilled.

Much motivation literature makes use of operant conditioning, made famous by the experiments of Skinner and Pavlov. Reinforcement increases the likelihood of a behavior occurring in the future. Positive reinforcement is application of positive rewards bringing the person above neutral – like money and compliments. Negative reinforcement refers to cessation of negative stimuli, like electric shocks or complaints (e.g. a mother who picks ups a...

In simple terms, think of rewards as carrots designed to lure people into performing the desired behavior.

1. Rewards fail because they are short-term.

2. Rewards don’t work if the person doesn’t want them.

If the worker doesn’t want the carrot, the behavior won’t be reinforced. For instance, someone may get vacation days she doesn’t use, or she doesn’t want to be recognized as the Monthly Peppiest Employee. In some cases the worker may intentionally lower effort to avoid the reward.

3. Rewards are too narrowly focused.

Once again, engagement is an intrinsic, deep-rooted commitment to the job, organization, team, manager, and customer. Engaged employees work hard for the sake of the organization and because they feel fulfilled. Engagement buffers against short-term changes in motivation, like time pressure and equipment failures.

To picture the difference between engagement and motivation, imagine that a team is working to meet a deadline. An equipment failure makes it impossible to meet the goal. Do they keep soldiering on trying to achieve the most, or do they give up?

Engaged people do the first, motivated the second.

How Engaged Employees Do Better

Engaged employees tend to do the following:

Shortform Exercise: Are You Engaged?

Think about your current work situation and whether the environment increases engagement.

An engaged employee takes initiative, is excited to exceed goals, speaks with pride about where they work, and is committed to the organization. Do you consider yourself engaged? How can you tell?

Employees who feel respect for the company and feel respected in return work harder to achieve the group’s goals. They tend to adopt a more giving stance rather than obsessing about personal gain. An effective leader has loyal followers who willingly do what is asked of them.

Respect can come from fear and intimidation, or it can come from sincerity and helpful motives. The latter is more sustainable and inspiring, so the book focuses on the latter.

We’ll explain each and how to develop respect in each direction.

Respect for the Organization

Respect for the overall organization causes employees to work harder. Employees are less likely to burnout. And customers are more likely to trust the...

Reflect on when you felt the most respect in each of the five directions.

When in your life did you feel the most respect for the organization you worked for?

We all desire social belonging and feeling like our efforts are important. Recognition from people, especially your managers, is a very direct way of achieving this. Marciano argues that the ROI of positive feedback is huge – a minute spent on complimenting work can lead to hours of increased productivity. Positive feedback is reinforcement that makes the behavior more likely to happen again, unprompted.

Managers tend to overestimate how much they give recognition and underestimate how important it is to employees. Imagine that some people keep a positive sticky note from their boss for months – it means that much to them.

Failure to reinforce through recognition actually suppresses behavior – if you assign a project and don’t reward hard work to meet its deadline, the worker is less likely to meet the deadline next time. If you admonish a worker for poor behavior, and the worker corrects it but doesn’t receive positive feedback, she’ll fall back to the bad behavior, for there is less reason to correct it. “You don’t get team members to take initiative by focusing on their lack of initiative.”

People tend to acclimate to repeated signals of one kind, and to notice...

Employees enjoy feeling autonomy, with the freedom to take risks and seek novel solutions. Autonomous employees are helpful because they’re more flexible in responding to novel situations and require less management overhead. They provide the change they want to see in the organization, which increases a feeling of ownership in the company’s success.

Autonomous employees require information sharing to understand the goals of the organization. Only then can they independently make decisions that don’t detract from the team. (Shortform note: this echoes the concept of “Commander’s Intent,” where the high-level goals are defined specifically enough for the subordinate to know how his personal goals fit in, but vaguely enough to be agile and give the subordinate room to operate freely.) In contrast, keeping employees on need-to-know basis makes them feel untrusted and makes...

Managers should provide feedback with the mindset of a coach: I want you to be successful. This viewpoint makes employees feel cared for and lowers defensiveness (compared to the situation if the manager were just berating the employee).

80% of feedback should be positive and reinforce behavior, while 20% should be about improving performance (constructive feedback).

Give feedback often. Lack of support signals to the employee that she doesn’t matter much and there’s no hope for her. This can set off a vicious cycle of disengagement and confirmation bias by the manager (“I knew Tim was no good -- look at how disengaged he is. I’m not going to waste time on him.”).

Good constructive feedback comes quickly after a problem begins. This wastes fewer resources from suffering the problem and makes it less awkward to point out (as opposed to giving feedback on a problem 6 months earlier).

If you give feedback often enough, performance reviews...

The author uses partnering to connote a relationship where parties are treated as equal partners, not as us-them or superior-subordinate.

By making your employees partners on a team, they think like business owners, and they act as stewards of the organization’s values. They can make decisions without waiting for approval. When working as partners on a team, people put the team’s goals before the self and use the best of their collective strengths while nullifying their weaknesses.

To foster this spirit, the manager should emphasize that no one wins unless everyone wins. Managers should also be willing to dive in and get their hands dirty.

This should be obvious, but it often isn’t: by setting clear goals, you get the outcome you desire. If you don’t tell people what you want, how can you expect to get it?

A failure of an employee to perform is often a failure to communicate clear expectations with employees. As with positive feedback, managers often underestimate the clarity of goals they give to employees.

Employees don’t want to fail, and they don’t want to be yelled at. When’s the last time you purposely failed or felt good about failing? Don’t jump to this conclusion if an employee underperforms. Make sure that the goals you set were crystal clear.

Setting clear goals also allows you to evaluate people fairly. High-performing employees actually prefer clear goals, so their contributions can be distinguished from those of poor performers. “Just do your best” invites too much vagueness.

New employees need clear expectations to give them confidence they’re on the right track – think pointing a ship leaving port in the right direction. You might even make expectations clear during the interview process – what the hours are like, how they’ll be evaluated, what resources they’ll have. Doing...

Consideration is giving careful thought to a person. Acknowledging that the person is human and not just a cog develops loyalty, not just in the recipient but also in teammates who witness considerate behavior. This inspires people to show up for work other than to receive a paycheck.

Trust is confidence in a person and absence of questioning of the person’s motives.

Trust engenders engagement by giving the employee more ownership over her work and not wanting to let the supervisor down. Trusted employees feel more comfortable pitching risky ideas, and they’re more receptive to change as they believe the employer has the employees’ best interests at heart.

In a culture of distrust, ideas are not shared for fear of others exploiting or disparaging them. Motives are constantly questioned – “what is this person up to now?” Untrusting people assume the worst. It crowds out productive thinking.

Some people start out trusting by default, but for others, trust takes years to build. A single mistrustful step can shatter trust...