Do you have problems finishing things? Do new ideas distract you from previous ones? Do you get derailed by setbacks more often than you would like?

Then you could use more grit. In Grit: The Power of Passion and Perseverance, Angela Duckworth shows how grit – the combination of passion and perseverance – distinguishes high achievers, and why talent isn’t as important as most people think. Learn the 4 major components of grit, and how to develop grit in yourself, your kids, and your teammates.

This is a preview of the Shortform book summary of
Grit by Angela Duckworth.
Read Full Summary

We tend to fetishize talent because it protects our ego – if...

Want to learn the rest of Grit in 21 minutes?

Unlock the full book summary of Grit by signing up for Shortform.

Here's a preview of the rest of Shortform's Grit summary:

Grit Summary Part 1: Why Grit Matters | Chapter 1: What is Grit?

Angela Lee Duckworth is the child of Chinese immigrants. Her father, Ying Kao Lee, was a chemist and research fellow at Dupont. Growing up, her dad was obsessed with how smart he and his family was, and he often told her when they disagreed, "you’re no genius!"

Later in life, Duckworth wins the MacArthur Fellowship, often called the "genius grant," ironically for the theory that accomplishment may depend more on passion and perseverance than inborn talent.

Instead of talent, Duckworth formulated the idea of grit: the combination of passion and perseverance. Passion means long-term adherence to a goal and consistency of interest, as opposed to being a dilettante and changing your goal mercurially.** Perseverance means overcoming setbacks, hard work, and...

Even though grit is so important, as a culture, we collectively obsess so much over talent.

When surveyed directly, Americans are more likely to point to hard work as the key to success, rather than talent. But when asked indirectly, we tend to show a "naturalness bias" toward internal talent rather than persistence.

How does grit actually lead to achievement?

Here’s the central model on why effort matters so much:

Here are important implications of this model:

Here’s a simplistic model of what total achievement looks like, for a natural vs striver: 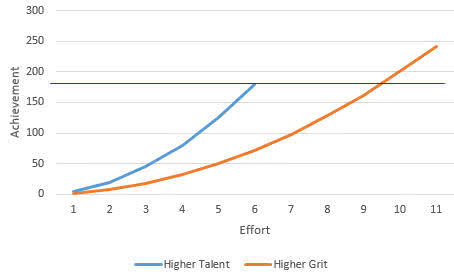 The higher-talent person starts off with a lead. She expends some amount of...

How do you measure grit? In all the studies we’ve mentioned, grit was quantified through a self-assessed survey. You can take it yourself and see how gritty you are.

Now add up your score - there’s a possible total of 50. Then divide that by 10. The higher your score, then the more grit you have.

Let’s think about how much grit you have, and how to develop grit with better goals.

Was your grit score higher or lower than you expected? Where do you fit in the population distribution? Are you stronger at passion or perseverance?

All behavioral traits have contributions both from genetics and from the environment. When a trait changes rapidly in a population over time, this suggests the environment is the major cause, since genetics hasn’t had the time to change much.

Duckworth tries to apply this logic to show that grit has some portion due to environment and is thus...

If you’re not as gritty as you want to be, ask yourself why. Common reasons people lack either passion or perseverance include the following complaints:

In contrast, the very gritty tend to give up for the above reasons less. There are four psychological assets that paragons of grit have in common:

Each asset directly addresses the corresponding complaints above it.

Being interested by your pursuit is the beginning of developing grit. Paragons of grit say, "I love what I do. I can’t wait to get on with the next project." They’re doing things not because they’re forced...

The next obstacle to developing grit is the feeling that you’re not making any progress. Even if you’re interested in a task, if you put in a lot of time and don’t feel you’re getting a reward, it’s hard to keep persevering.

The way to guarantee progress with your time is to conduct deliberate practice. This is a structured, disciplined way to put in time and get results.

Note how deliberate this is, compared to merely putting in time absent-mindedly and going through the motions. Good practice requires deliberate effort to do every time.

The Evidence behind Deliberate Practice

Much of the deliberate practice concept comes from Anders Ericsson, who popularized the...

Want to Read the Rest of this
In Book Summary?

If you have interest in your work and conduct deliberate practice, you’ll make progress. But ultimately, if you don’t believe that your work matters and contributes things of value, you will find it difficult to maintain your work for a long time.

This leads to the third component of grit: purpose. Purpose, as defined here, is "the intention to contribute to the well-being of others."

Duckworth found that universally, grit paragons extend the benefits of their achievement to a level beyond themselves – other people (like their children or clients) or an abstract concept (society, my country, science).

Evolutionarily, we may developed a drive for altruism, because a cooperative species thrives more than the individual. Altruism improves grit by both sustaining passion (because your goals are more important) and perseverance (because you fight harder for goals that you care more about).

There is a possible confound here where grittier people may take on jobs that are generally accepted to have more purpose (like being a doctor), making the purpose questions easier to answer. However, across a range of careers, Amy Wrzesniewski has...

Try to see the greater purpose of your work.

In your current work, do you feel it’s more of a job, a career, or a calling? Why? What kinds of personal rewards do you get from your work?

In a classic experiment, scientists Seligman and Maier split dogs into two groups. In one group, the dog is put in a cage and is shocked at random times. If the dog pushes against a panel at the front of the cage, the shock ends early. After 64 shocks, the pain ends. In the other group, there is no panel that ceases the shocks.

We’ve talked about developing grit internally. You can increase interest and purpose, and build in better deliberate practice helps.

But grit is developed over a long period of time and is affected by the environment you’re in. Grit depends on what kind of feedback you get and what opportunities you’re exposed to.

The last part of the Grit book discusses our environments - childhood, parenting, and organization.

This forms a 2x2 grid of parenting styles:

Outside of the home, extracurriculars have been found to correlate well with student outcomes like better grades, higher self-esteem, and lower delinquency. In particular, the longer and the more intensely you engage in an extracurricular, the better the outcomes.

Data on the Benefits of Extracurriculars

A culture exists when a group of people agrees on how to do things and why. The sharper the difference between this group and the rest of the world, the stronger the bonds.

To be grittier, find a gritty culture and join it. You will conform to the group and adopt their gritty habits. When it’s socially expected to wake up at 4 AM to practice, it becomes what you do.

The causation is bidirectional between the people and the culture. People need to be gritty to join a culture that selects for grit (like a top sports team). Then, because gritty people will reinforce each other, the culture gets grittier, which raises the bar for people who join. This is the corresponsive principle at work.

If it’s part of your identity to finish what you complete, you don’t constantly stop and ask, "what is the cost-benefit tradeoff of continuing? What are the risks?" You ask: "Who am I? What is this situation? What does someone like me do in a situation like this?" Often grit will take you...